European stocks have bounced back sharply today, with the major indices rising between 1 and 3 per cent by mid-morning session. The equity market rally is in part because of short-side profit-taking following the recent acceleration in the downward trend. The lack of any major economic news so far this week means even the sellers are making a more sober assessment of the global economy and are wary of the possibility that Fed Chairwoman Janet Yellen may say something surprisingly dovish as she testifies before the House Financial Services Committee, in Washington, later today.  They also realise that after its latest big drop, crude oil could come back if, for example, the US Department of Energy reports a surprise drawdown in oil inventories this afternoon. If oil rebounds, energy stocks could benefit as a result.

Another reason behind today’s more positivity is the fact shares in Deutsche Bank have surged 13% in Frankfurt, lifting financial stocks across the board in Europe.  The stock has been among the worst hit in the sector this year as concerns have mounted about the bank’s ability to pay coupons on its debts. But the company has reassured investors that the bank is in a strong financial position, while reports that the bank is considering buying back billions of euros in debt has also calmed investors’ anxiety.

Nevertheless, stocks remain in bear territory in many regions across the global and this latest bounce-back could well prove to be short-lived. Indeed, the daily chart of the German DAX index, below, suggests the bounce may indeed be based on shorts covering their positions rather than the buyers returning en masse. After all, the RSI has bounced off the ‘oversold’ threshold of 30 a couple of times, making a small higher low relative to the previous occasions. This suggests that the bearish momentum may be weakening a tad. Added to this, the DAX itself has reached the 161.8% Fibonacci extension level of its most recent corrective move, around 8840. With both the DAX and RSI at exhaustion points, some traders would have probably thought that today was the time to take some profit, while ‘dip buyers’ may have also dipped their toes in at these exhaustion points.

But such rallies are not uncommon in bear trends and the markets can remain oversold a lot longer than would normally be the case. Undoubtedly some traders are waiting for a pullback to get back in on the short side. So, at this stage there is no reason to expect this latest bounce to last long. Indeed, bullish speculators should continue to remain nimble and alert to the possibility of further sharp falls in the stock markets.

The DAX has now broken some short-term resistance levels following this morning’s bounce. But the key one looms large at around 9300, or specifically in the 9250-9325 region. Should the index get to this area, I would expect the selling pressure to resume once more. But in the event that it doesn’t and the index goes on to break above 9325 then we could be in the process of a much larger recovery. I am not convinced yet if that is the case, however.

On the downside, there are not much reference points for traders to watch until the 2014 low at 8350 or the 2007 high at around 8160 now. So, there is plenty of room for further big falls.  Other potential supports to watch are the Fibonacci extension levels from the previous swings, as shown on the chart. These levels would be where the sellers are likely to take profit, so we could see at the very least short-lived rebounds, should we get there in the first place. 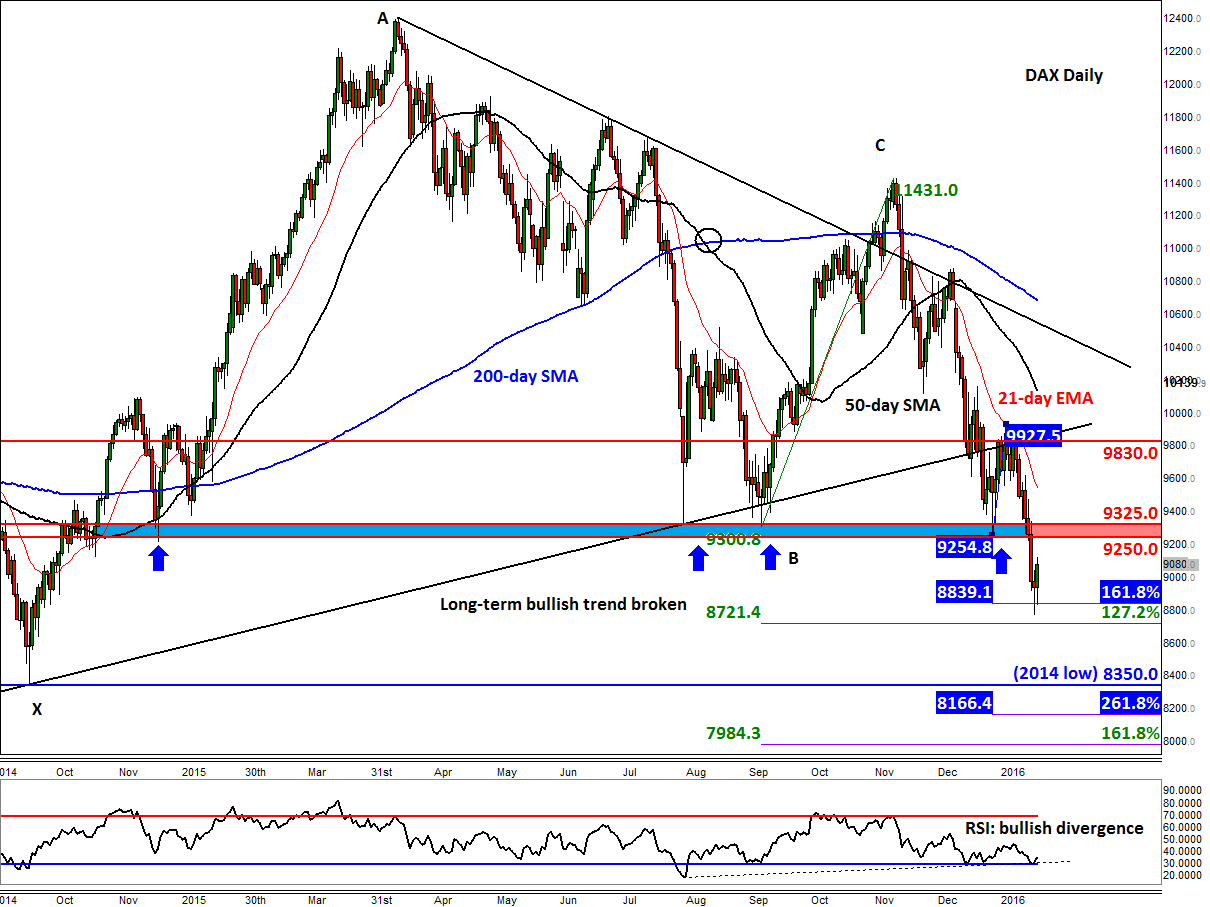 USD/CNH closed above 7.000 for first time in 26-months
By:
Matt Simpson