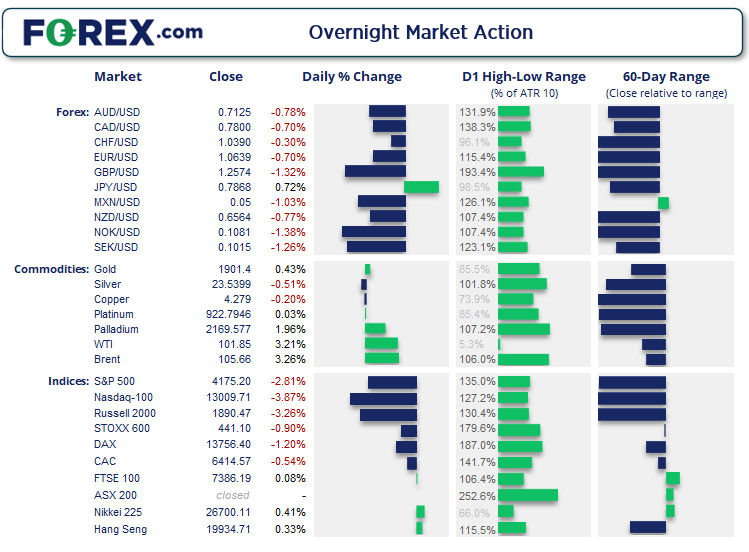 Bearish sentiment stemming from a hawkish Fed, growth concerns and fresh threats from Russia overshadowed earnings season on Wall Street. Russia have vowed to cut of the gas supply to Poland and Bulgaria on Wednesday – their first such move to a NATO member – in retaliation for the West’s involvement in the Russia-Ukraine war.

The Nasdaq 100 stalled just shy of key support at 13,000 and has now fallen over -22% from its record high. The cash market opened at its high and closed at the low of the day, although Tesla was the main ‘driver’ of the move as investors sold the stock on concerns Elon Musk may sell some of his stake to fund his Twitter purchase. Weak earnings from Alphabet also dented sentiment.

Lael Brainard has been confirmed as the Fed Vice Chair in a widely expected move. Whilst she is considered a dove at heart it is not expected, her appointment as is not expected to dampen the Fed’s current hawkish stance.

USD remained supreme against all except the Japanese yen overnight and was the strongest major, whilst the yen also received safe-haven inflows as US stock markets fell further on weaker earnings. GBP/USD was the weakest major and fell around -1.3%.

The US dollar is also on track for the strongest major this month, rising over 5% against NZD, 4.8% against AUD ad 4.3% against JPY. The dollar index closed above 102 to a fresh 25-month high and was its fourth consecutive bullish close.

NZD/USD has now fallen over -4% since the RBNZ’s hawkish hike of 50-bps and the pair is less than half a day’s trade away from the YTD low. AUD/USD has fallen over -7% since this month’s high and is just 19 pips above the 71c handle

Bearish momentum for gold has been strong overall since its rally failed to test $2000 last Monday. As outlined yesterday our bias is for a move to 1870 whilst prices remain below 1916, but there is the potential for a minor bounce before losses continue. 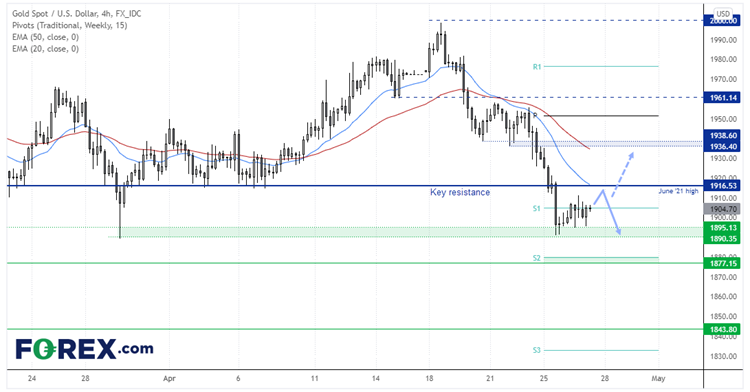 A small bullish inside candle formed yesterday above the 1890.35 – 1895.13 support zone. ON the four-hour chart a bullish outside candle has formed which is also a higher low – so it appears this is part of a 3-wave countertrend move. We are therefore bullish above 1890 and now targeting 1916. If we see a bearish reversal around 1916 we will flip back to the bearish bias for a move to 1890. But if we see a strong break (or daily close) above 1916.50 then it suggests a deeper countertrend move. 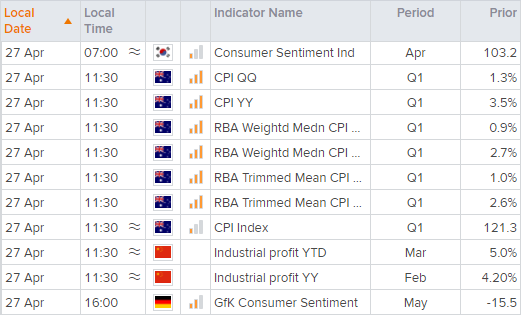