In this week’s edition, we are getting technical on the Dollar Index, S&P 500, GBP/USD and gold

The dollar index has shown some signs of life around its 200-day average and support in the 1.0500-1.0540 area. But it is far too early to say whether it will bounce sharply here and turn into a full-on rally. However, it is a key support area and we are still inside a long-term bull trend. After the recent sell-off, the downside risks have now diminished in my view.

What the dollar bulls will want to see next is for the DXY to print a short-term higher high now, above 108.00. If this condition is met, then we could see follow-up technical buying towards the base of the breakdown at 109.45 next.

As well as the ongoing situation in China, investors will look ahead to a busy week for macro data, which will include the publication of US GDP on Wednesday and non-farm payrolls report on Friday. Fed Chair Jerome Powell will also be speaking on Wednesday. If Powell re-iterates the Fed's commitment to bringing inflation down through further rate rises and mentions that one or two inflation reports are not enough to suggest the Fed's job is done, then this could trigger a dollar recovery. 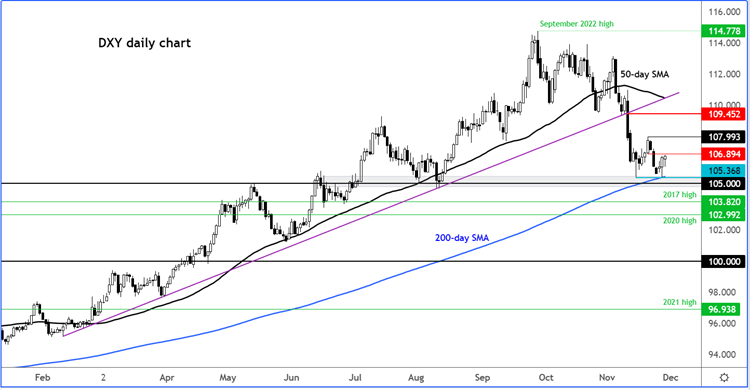 The S&P 500 fell noticeably on Monday as traders showed some respect to the 200-day average and key resistance starting around 4040 in the range between 4040 to 4100. This is going to be the most important zone to watch given that the 200-day average and long-term bear trend both meet there. So far, the bulls have been reluctant to press ahead. The bears will need to reclaim a few broken levels before they are back in full control again.

Short-term support around 4975 was being eroded at the time of writing. The next important level on my radar is at 3920ish, which also converges with the short-term up trend. Below that 3840 is the next level for the bulls to defend. 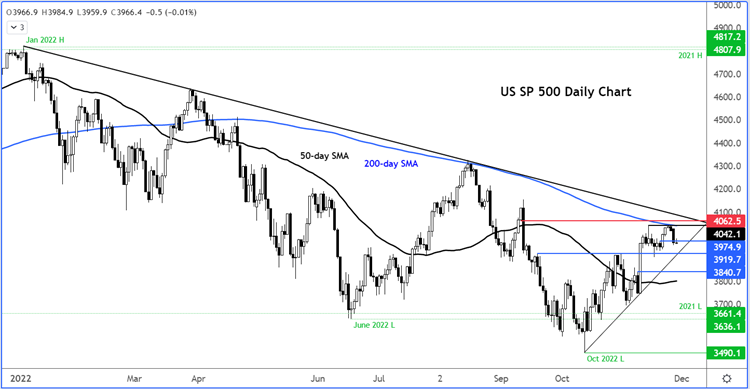 The GBP/USD has fallen back below the 1.20 handle after being more than 150 pips higher last week. The earlier GBP/USD strength had been driven largely by US dollar weakness. There’s also been some strength for GBP as Rushi Sunak appears more resolute than his predecessor in trying to address rising borrowing costs. But the GBP/USD continues to face major headwinds from multiple fronts.

Anyway, we will cover the macro factors some other time. For now, let's focus on the techncals...

The GBP/USD is showing some weakness around these key levels, which is not to be taken lightly if you are long or bullish on the cable. The slope of the 200-day is negative, meaning that despite the big recovery, the long-term trend remains objectively bearish. As such, there is always the danger that the longer-term bearish trend could resume at any moment.

However, like many other markets, the bears will now need to see a lower low on the short-term charts. The most recent low was printed at around 1.1775 before the latest leg up. This level is now pivotal. The bulls will remain hopeful while above it, and the bears largely on the side-lines. A potential breakdown could pave the way for a drop to 1.15s. 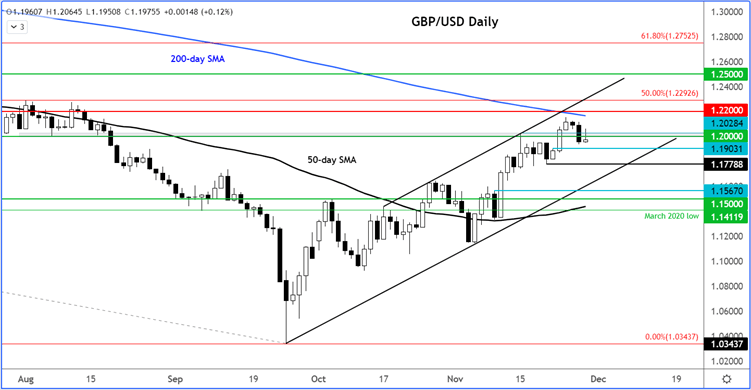 Gold has been stuck between two major zones in recent days. The upside has been capped by strong resistance starting around $1780 to $1800. Here, previous support meets the 200-day average (now sloping downwards) and 38.2% Fibonacci level against this year’s high. The downside has been supported – for now – by previous resistance around $1722-$1735 area.

Once one of these ranges break, then we might see a more pronounced move in gold prices in the direction of the break. Could the trigger be provided by Fed Chair Jerome Powell’s speech on Wednesday? For what it is worth, I am leaning towards the bearish argument for gold, due to still-rising interest rates around the world. 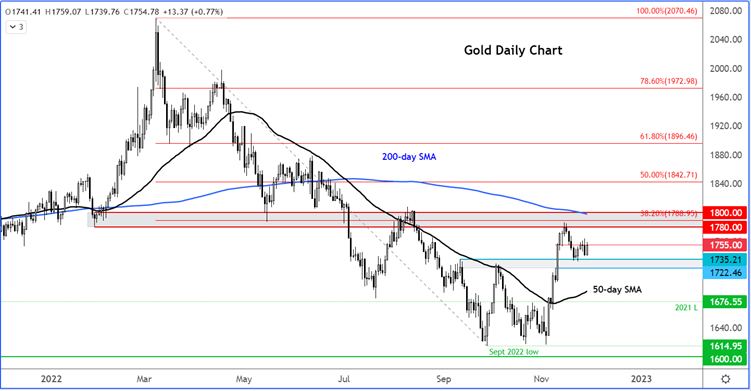