In this week’s edition, we are discussing the dollar, and then getting technical on EUR/USD, gold and the US small-cap Russell index.

After hitting a new low in this recent downward move, the dollar bounced back off its lows despite the softer PPI print. Though there are no concrete signs of a bullish reversal yet, the greenback has nonetheless turned higher from important technical areas on a number of major currency pairs, including the 1.20 handle on the cable. The dollar bears may wish to proceed with some caution after what has been a bruising few sessions for the greenback.

In case you missed it, PPI data was weaker on all fronts:

The dollar’s so-far small rebound suggests the market is now looking for the Fed to do the walking, having done some (dovish) talking. While the softer PPI data has further raised speculation about the Fed pivoting to a more dovish stance, the fact that other central banks are likely to follow the footsteps of the Fed means the dollar will still hold some interest rate advantage over her rivals. So, the greenback could easily come back after such a strong downward move, and this may undermine the likes of the EUR/USD, GBP/USD and gold after their very strong performances in recent days. It is also very important not to get carried away by one month’s worth of data. Despite coming down, inflation is still very high above the Fed’s target, and the central bank is not going to stop raising rates just yet.

EUR/USD rally could pause for breather 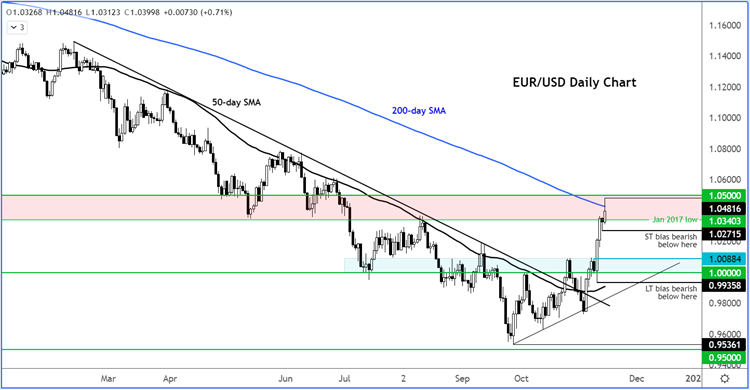 Daily: The EUR/USD has broken the latest hurdle around 1.0340, the 2017 low, before rising to test the 200-day moving average at 1.0430ish. From there, it has unsurprisingly sold off after a big upward move from last week causing prices to become “overbought” in the short-term outlook.  Support at around that 1.0340 area now needs to hold if the bulls are to remain in control. However, if that doesn’t happen and we break Monday’s low at 1.0270 then this will tip the balance back in the bears’ favour. 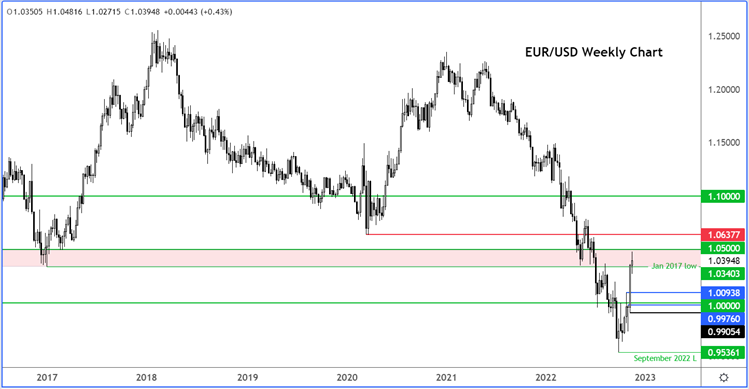 Weekly: The EUR/USD has arrived inside a large resistance range between 1.0340, the 2017 low, and 1.0500, the psychological round level. Given the long-term bear trend, it wouldn’t be a surprise if it started to sell off from here after a big upward move last week. On this time frame, the next level of support is now seen around the breakout area of 1.0090, which means even if rates have bottomed, there is the prospect of a deep pullback in the event of some short-term levels breaking as outlined on the daily chart.

The precious metal has turned lower after entering the key $1780 to $1800 area, where the metal had previously found significant support back in February, before its collapse and the eventual breakdown in July. It subsequently re-tested this area in August, which led to the next big leg lower.

Here we are again, and gold’s next big move will be partially determined by what traders decide to do here. If this area again offers resistance and gold drops, it could go on to re-test the breakout area around $1722-$1735 area next.

On the other hand, if gold managed to close above this area, then that would be another bullish development, which could help to encourage more bulls to step back in after what has been a frustrating year for gold bugs. 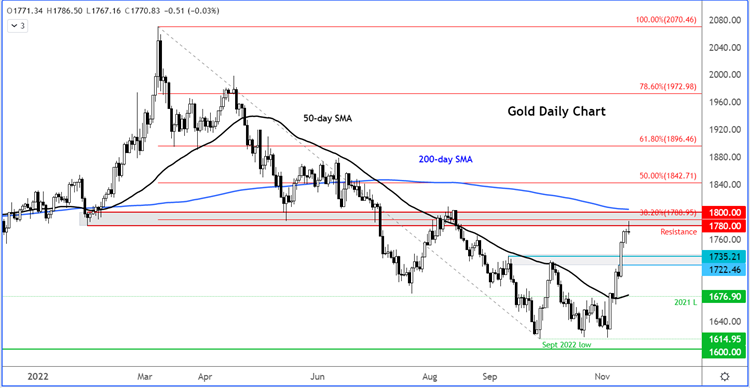 The small-cap index is potentially at a turning point now that it has arrived to test a band of resistance in the 1880 to 1905 area. Here, we have the potential right shoulder of a head and shoulders reversal pattern converging with the 61.8% Fibonacci retracement level against the August high. So, it is a key area for the bears to defend, if this is still a bear market. For confirmation, the bears will need to push the index back down below the 200-day average on a daily closing basis. If that happens, then as a minimum we could see a drop to the next support level at 1813 next. 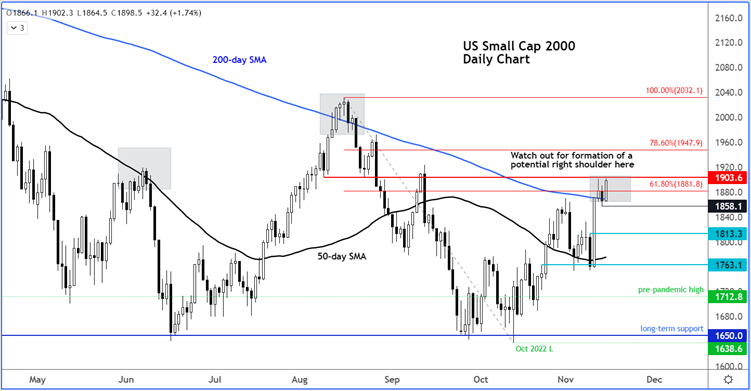