US Core PCE and ECI as expected. What does it mean for the FOMC next week?

Before the data release on Friday morning, Fed whisper Nick Timiraos of the Wall Street Journal tweeted that “while the Fed isn’t data-point dependent and the decision for next week of 75bps seems unlikely to change, another uncomfortably high ECI reading might argue for a somewhat higher terminal rate and could muddy the debate over slowing the pace in December.”

Based on the tweet from Timiraos and Friday’s inflation data, it seems almost certain that a 75bps hike next week is baked in.  However, what does today’s data mean for the December meeting.  Remember, just a few days ag0, Timiraos wrote an article suggested that at the upcoming meeting, the Fed would discuss whether it should reduce the pace of rate hikes to 50bps from 75bps.  Although the Core PCE and the ECI were roughly in line, today’s tweet mentions “another uncomfortably high ECI reading”.  Will the Fed consider a reading of 1.2% to be an uncomfortably high reading?  In addition, the Core PCE is at its highest level since March (when the Fed first started hiking rates).  As this is considered the Fed’s favorite measure of inflation, it seems possible that the Fed could stick to its 75bps rate hike pace at the December meeting.

Given that the FOMC seems committed to a 75bps hike at the November meeting, the odds of a 75bps rate hike in December jumped to 40%,  according to the CME FedWatch Tool.  However, odds of 50% still favor a 50bps hike. 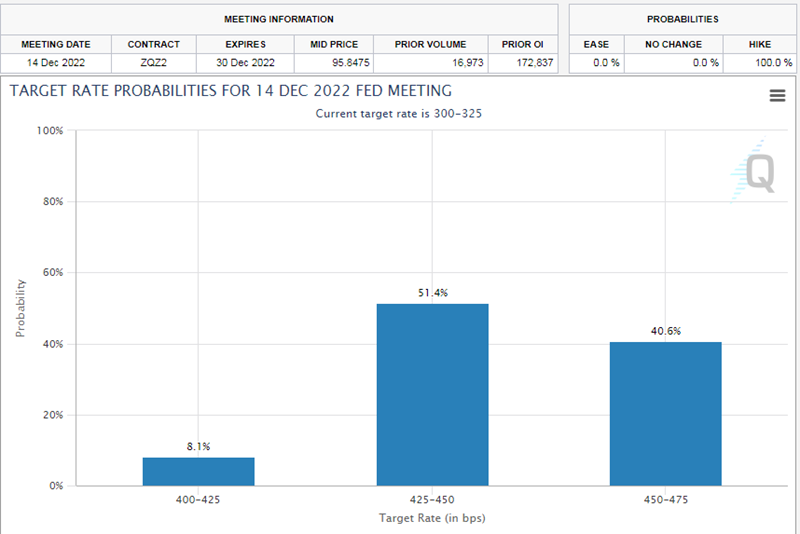 On a 240-minute timeframe, USD/JPY is most sensitive to moves in rate expectations.  The pair has been bid most of the day, primarily due to the dovish BOJ meeting earlier.  However, if the market believes a 75bps rate hike is in the cards for both November and December, USD/JPY could be moving higher.  On a 240-minute timeframe, the pair is hovering near horizontal resistance at 147.51.   If the pair moves higher, the next resistance is at the bottom trendline of an upward sloping channel near 148.75.  Above there, price can move to the psychological round number resistance of 150.00, then the highs of October 21st at 151.95.  However, if the pair moves lower, fist support isn’t until the confluence of support from the September 22 highs and the October 27th lows between 145.10 and 145.90.  Below there, price can fall to the 61.8% Fibonacci retracement level from the lows of September 22nd to the highs of October 21st at 144.78, then the lows from October 4th at 143.49. 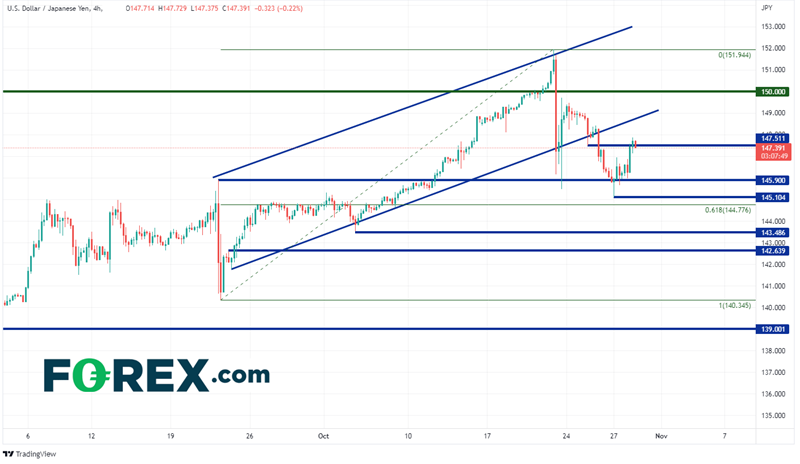 Will the Fed consider an ECI reading of 1.2% to be “uncomfortably higher”?  Also, the Fed’s favorite measure of inflation is back up to levels not seen since March.  That should catch the eye of the Fed.   As it seems that 75bps is a done deal for the November meeting, the markets are now looking to the December meeting.  Will the Fed pivot and cut the pace of hiking at that meeting? Or will economic data before then cause the markets to be believe the terminal rate will be higher?