US CPI surprises for the second month in a row. What does it mean for the Fed?

US CPI for November took markets by surprise for the second month in a row as the headline print was 7.1% YoY vs and expectation of 7.3% YoY and a previous reading 7.7% YoY.  This was lowest reading since December of last year and the 5th consecutive month of declines after peaking in June at 9.1% YoY. Recall that October’s print was much lower than the expected 8% as well.  In addition, the Core CPI reading (which excludes the often-volatile food and energy components) was 6% YoY vs an expectation of 6.1% YoY and a previous reading of 6.3% YoY.  This was the lowest reading since September and the 2nd consecutive monthly decline after peaking that same month at 6.6% YoY.

The FOMC meets tomorrow to discuss interest rate policy. Fed Chairman Powell has put the markets on notice that it is likely to hike rates by 50bps.  During his speech at the Brookings Institute on November 30th, Powell said that “the Fed could slow the pace of rate rises as soon as the December FOMC meeting.”.  Markets took this to believe that a 50bps cut was a done deal. Pre-CPI, the market was pricing in nearly a 77% chance of a 50bps hike and a 23% chance of a 75bps hike.  Immediately after the CPI print, those percentages were slightly changed, with an 80% change of a 50bps hike and only a 20% chance of a 75bps hike.  Could the Fed surprise everyone tomorrow and only hike 25bps?  Its unlikely, but what it could affect are the “dot plots”.  More specifically: Where does the Fed see the terminal rate of interest rate hikes?  This will be the most data point to watch from the Summary of Economic Projections. 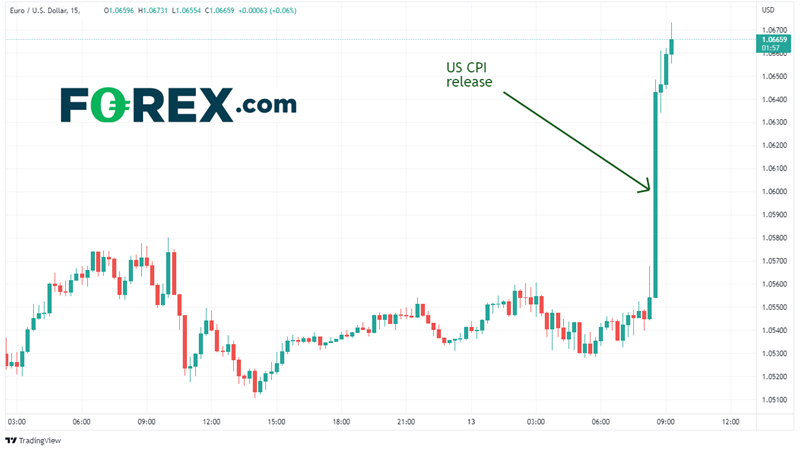 On a daily timeframe, EUR/USD had been trading lower most of the year from a high in February at 1.1495 to a low in September at 0.9536.  Since then, the pair has broken above its long-term downward sloping channel and moved higher in an ascending wedge formation.  In doing so, EUR/USD retraced over 50% of its Year-to-Date high to low, near 1.0515. Expectations are that price will break lower out of an ascending wedge as it nears the apex.  That could still happen after the FOMC meeting tomorrow, however after today’s print, the pair moved higher above horizontal resistance. 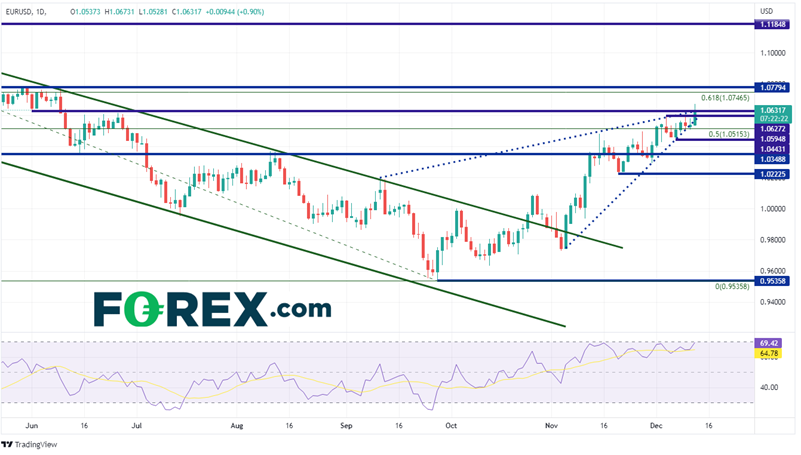 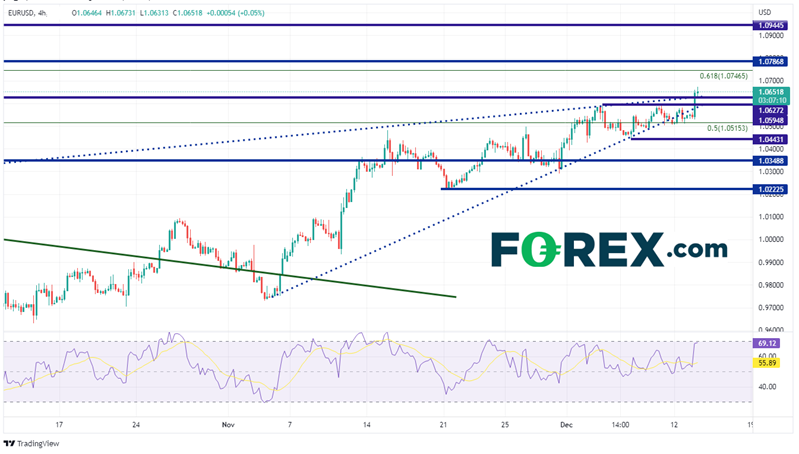 With the much lower than expected CPI print for the US two months in a row, the FOMC is sure to take notice at tomorrow’s meeting.  Many questions will be raised. Will the Committee still hike 50bps as expected? What will the FOMC see as the terminal rate during this interest rate hike cycle?  Regardless of any of the new questions to be raised, the one thing we know is that although inflation is still relatively high, it is moving in the right direction (lower)!