US Dollar retreats further ahead of US CPI

The US dollar has continued to retreat, with the greenback now down for the fifth consecutive against a basket of foreign currencies. Repeated hawkish remarks from several Fed officials last week, including Fed Chair Jerome Powell and FOMC members Charles Evans, Christopher Waller and Esther George, all fell on deaf ears. Investors hoping that the dollar has peaked will face a key test today. US CPI, due for release at 13:30 BST, will give the Fed the last read on inflation before the central bank meets to decide whether to hike by 50 or 75 basis points next week. That being said, it looks like most of the policymakers at the FOMC have already made their minds up i.e. wanting a 75 basis point hike. But it is all about the next and subsequent meetings and how the Fed is going to tackle inflation.

Markets are convinced that the Fed will hike by 75 basis points later this month, even if US inflation weakens a little bit more.  CPI eased to 8.5% y/y in July from an over 40-year high print of 9.1% hit in June, leading to some talk about peak inflation and speculation that the Fed might ease off the gas. Analysts expect CPI to have eased further in August, to 8.1%, although core CPI is seen accelerating to 6.0% from 5.9% previously. There is thus the risk that the dollar could fall further in the short-term outlook should inflation prove to be less hot than expected.

However, barring a very low print, today’s CPI report is unlikely to significantly impact expectations around Fed tightening. Indeed, Fed Chair Jerome Powell has himself dismissed talks that the central bank will ease off the gas and instead provided strong hints at the Jackson Hole symposium that further aggressive hikes are on the way until inflation is under control. He was again super hawkish last week and there was nothing in his latest speech to suggest a shift from the current hawkish stance. Many analysts agree that the Fed’s stance should continue to offer a supportive environment to the dollar.

The greenback has also retreated because of a noticeable improvement in risk appetite in recent days with stocks, cryptos and metals all rising noticeably, dampening demand for the safe-haven currency. There’s a bit of optimism in the air that the EU’s plan to introduce price caps for Russian gas will help bring inflation under control in the eurozone, which is helping to lift the EUR/USD and European indices. In addition, there are hopes that the sharp rate increases from the Fed may already have dampened demand, causing US inflation to weaken. Jawboning from the Bank of Japan has also helped the USD/JPY move down in recent days, providing pressure on the dollar. All told however, not much has changed fundamentally. So, it remains difficult to bet against the US dollar. But it will now need to print a bullish technical signal to suggest the correction phase is over. 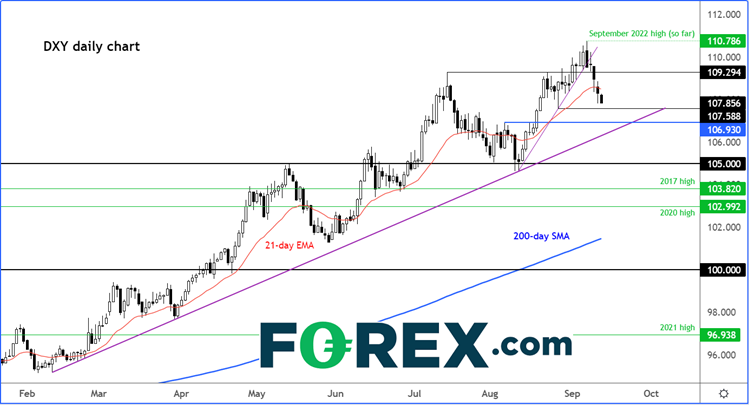