Following yesterday’s higher than expected CPI data, the US Producer Price Index was roughly as expected and lower than July’s readings. The headline PPI for August was 8.7% YoY vs 8.8% YoY expected and 9.8% YoY in July, while the Core PPI was 7.3% YoY vs 7.1% YoY expected and a 7.6% YoY reading from July. For the producers, final demand prices were lower in August than July.  This is good!  However, note that although the Core PPI was lower than July’s reading, it was higher than expectations.  This would indicate that when food and energy are removed from the equation, the PPI print is still higher than expectations.  For the Fed, this may indicate that inflation expectations at the producer level has spilled over and may become entrenched in producer prices.

Due to the mixed PPI readings, the US Dollar is relatively unchanged from before the print.  However, the US Dollar Index (DXY) is trading lower today as profit taking seems to have taken place.  After yesterday’s CPI print, the DXY bounced off the August 26th lows and the upward sloping bottom trendline of the long-term channel that they index has been in since March.  The DXY rose nearly 171 pips yesterday! Some profit taking today is to be expected, however that doesn’t mean the DXY won’t continue higher.  The first resistance is at the highs of September 7th, at 110.79.  Above there, price can move to horizontal resistance at 111.31, which is resistance from September 2001, then the 161.8% Fibonacci extension from the highs of July 14th to the lows of August 11th at 112.17.  First support is all the way down at yesterday’s low of 107.68.  Below there, the DXY can fall to support at the highs of August 5th near 106.93 and then the lows of August 11th at 104.65. 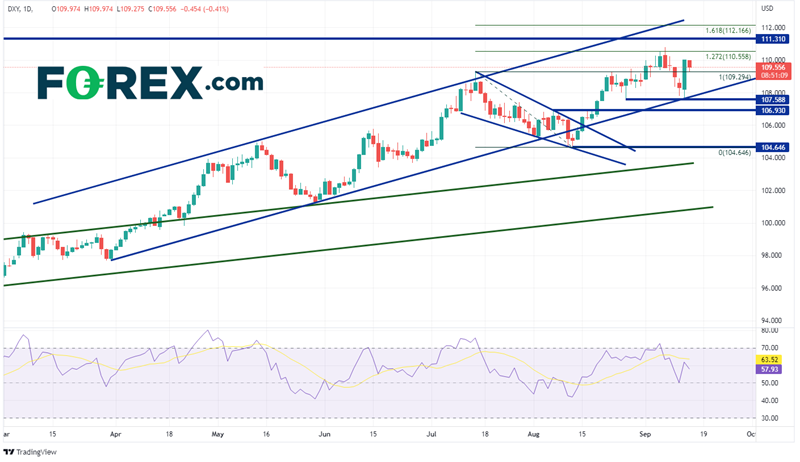 As the Euro makes up 57% of the DXY, one could expect that EUR/USD is moving in the opposite direction to the US Dollar Index.  After yesterday’s loss of nearly 155 pips, in which price bounced off the top trendline that the pair has been in since February, EUR/USD is seeing some profit taking today.  But that doesn’t mean the pair can’t move lower.  First support is at the lows of September 6th at 0.9859.  Just below there is the 127.2% Fibonacci extension from the lows of July 14th to the highs of August 10th at 0.9839 and then the 161.8% Fibonacci extension from the same timeframe at 0.9695.  First resistance is at yesterday’s highs of 1.0187, then the August 10th highs at 1.0367.  Above there, price can move to the highs of June 27th near 1.6149. 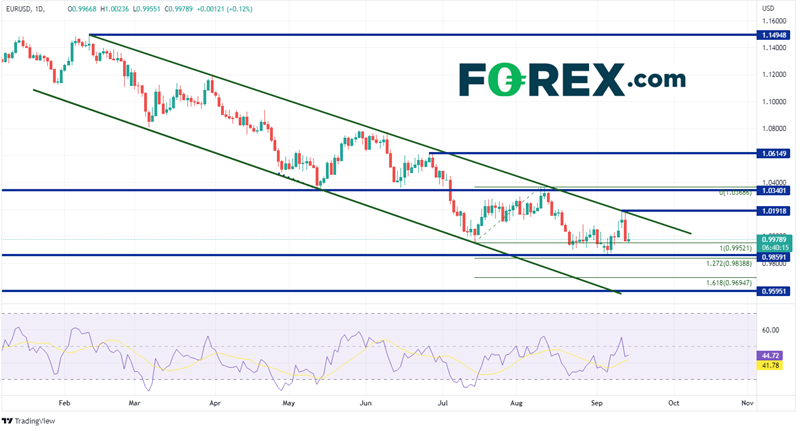 The reaction to today’s PPI print was relatively muted compared to that of yesterday’s CPI print.  Although the August Core PPI was hotter than expected, it was still lower than July’s print. Does that mean lower inflation is working its way from PPI to CPI?  Maybe.  However, today’s readings are still very high, relatively speaking, and the Fed is still expected to hike rates by 75bps at the FOMC meeting next week!