US Treasury Secretary Janet Yellen made another attempt to calm runaway inflation fears by saying over weekend that she considered the risk of inflation to be small and manageable.

Her comments come in the wake of President Biden signing off on $1.9 trillion stimulus package at the end of last week. Expectations for a strong and faster economic recovery are boosting stocks. However, the benchmark 10-year yield jumped to fresh 12 month high sat 1.64% as the market opened. The yield has since eased slightly allowing US futures to push higher and the US Dollar to ease off session highs.

The Fed along with the BoJ and BoE are due to report later this week.

The rotation out of growth and into value shows no sign of easing with tech stocks and the Nasdaq once again seeing demand decline whilst the Dow surges higher.

AMC +8% pre-market as it prepares to open two premises in Hollywood later today. The remaining 23 theatres in LA will open on Friday.

Delta Airlines Airline - +1.6% pre-market as it expects Q1 revenue to decline 60% -65% compared to the same period in 2019, but the airline announced that it is starting to see booking improve.

Airline’s will be in focus is focus after Friday’s passenger numbers were at the highest level since March last year. American Airlines +4% pre-market, United Airlines +2%

Where next fort America Airlines share price?
The stock has jumped over 10% on the open hitting a 12 month high of just shy of $26.00. The stock trades above its 20 & 50 sma on the daily chart in an established bullish trend.
The RSI has tipped into over bought territory so caution should be applied for placing further aggressive bullish bets. Some consolidation or a pull back could be on the cards ahead of a move higher. Immediate resistance beyond today’s high can be seen at $28.20 high February 21 ahead of $30.75 the pre-pandemic February high. 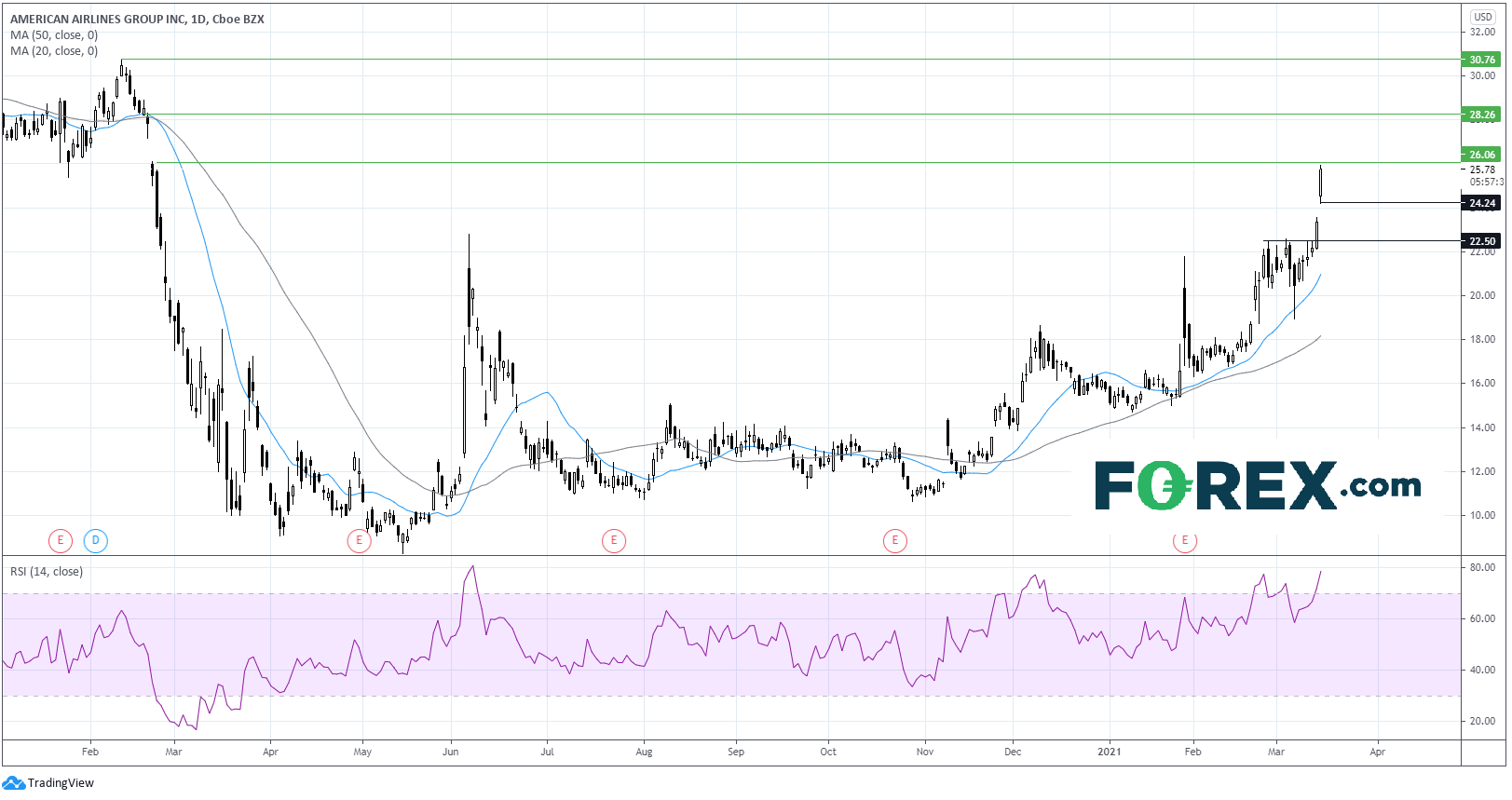 Bitcoin is retreating from a fresh record high of $61,674 hit on Saturday, down some 4% at the time of writing.

The drop in demand comes amid reports that India could completely ban cryptocurrencies, potentially cutting off one of the biggest markets in the world. A new law being worked on by senior government officials would be that people could be penalized for owning or mining cryptocurrencies. Not only is this the potential end to a huge market, but regulation could become an increasing concerns for bitcoin and the broader crypto market.

A growing number of European countries have suspended the use of the AstraZeneca covid vaccine over fears of adverse side effects, particularly blood clots. So far, up to 8th March there have been 37 reports of blood clots. AstraZeneca has hit back saying that 17 million doses have been given and there was no evidence that the jab increased the chances of blood clots. AZN +0.4%

GBP/USD shows some resilience versus greenback strength after BoE’s Andrew Bailey said that inflation in the UK could start picking up soon.

After a stronger start, the price of oil is edging lower, extending mild losses from the previous week. Oil closed -0.2% last week snapping a 6-week winning run. However, this appears to be a mere blip in an impressive run. Oil trades 30% higher YTD.