The US economy likely contracted at a faster pace than expected in July, according to the latest S&P Global PMI report. At 47.7 and 47.3, the composite and services PMI contracted at their fastest pace since May 2020 and the manufacturing PMI expanded at its slowest pace since July 2020, at just 51.3. The rate of contraction was at its fastest pace since the pandemic, with a slump in client demand and new orders being the biggest culprits to the disappointing data. 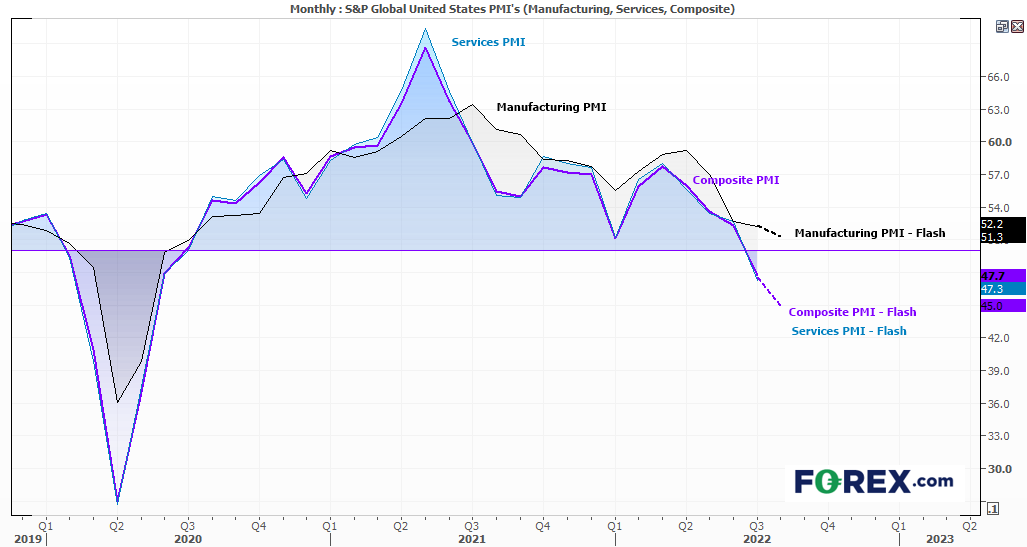 And this fall in demand has resulted in a reduction of hiring, which plays into the thesis that employment will be the next shoe to drop for the US economy. We evidence of layoffs, layoff intentions and employment claims turning higher whilst job ads and hiring intensions fall, large NFP prints are likely coming to an end.

Yet whilst US PMI data disappointed, it’s not as though the economic deterioration we’re witnessing didn’t come without plenty of warning.  Several key regional PMI’s have been contracting for months, small business sentiment indices are also on the ropes, inflation remains high and CEO’s have an increasingly grim view of the economy going forward.

The only upshot from all of this is that it is deflationary. It may not escape the pain coming, but it will likely bring prices lower. I’ve long argued that there will come a point where exorbitant prices will cease to be chased, and I believe we’re have reached that point. And the perpetual warnings of a recession likely adds to a dent in demand, and with that should come lower prices (at some point in the future).

Core PCE and Powell’s Jackson Hole speech up next 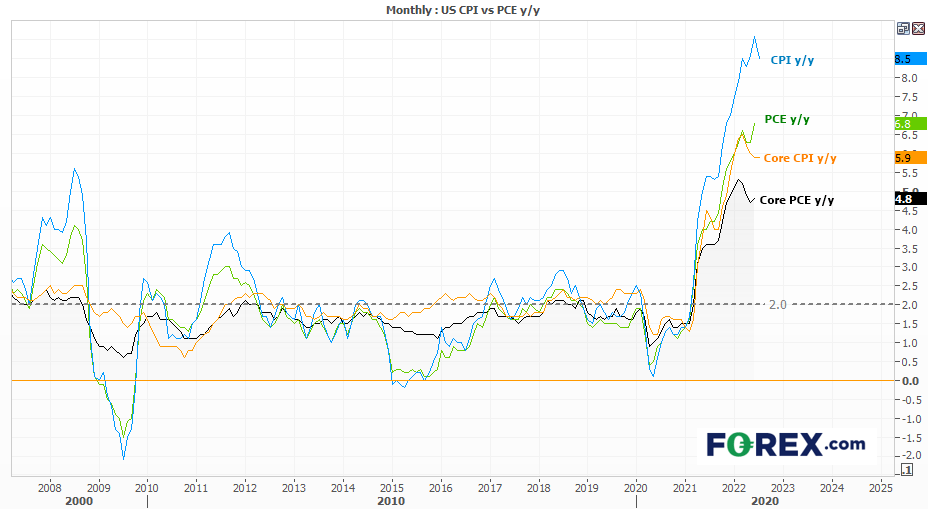 The Fed’s preferred inflation gauge – Core PCE - is released on Thursday, ahead of Jerome Powell’s Jackson Hole speech on Friday. It will be hard for Powell to ignore the weak economic data seen this week, although a softer inflation print would help take the edge off it. Whilst ‘regular’ CPI data is showing signs of having topped, it’s a little worrisome to have seen the PCE and core PCE prints rise in July. So any further signs of higher inflation of Thursday will likely see bets for a 75bp September hike increase with it.

The dollar has been knocked from its perch

Yesterday’s data was enough to knock the US dollar form its perch, and even shake USD/JPY from its latest highs. Given the dollar’s jolt after its recent rally, and we’re fast approaching key events this week, I suspect price action will be choppy and traders will be less willing to take a last minute punt on the dollar. So this leaves the potential for a retracement, ahead of its next leg higher – should core PCE rise, and force Jerome Powell to reluctantly conceded to higher rates and send warnings on an economy that is likely already within a recession.