By :
Global Author
After OPEC members agreed on Thursday to extend oil output cuts for nine months, crude oil traders pushed prices down by more than 4% during the trading day.

Markets had been expecting this deal extension, pricing-in such an agreement for more than a week after Saudi and Russian officials had already agreed in principle last week to extend the cuts. As a result, crude oil prices had been surging, helping to boost the Canadian dollar with it, in the run-up to Thursday’s OPEC meetings.

This pricing-in of the deal extension ultimately led to a sharp drop for oil on Thursday, as OPEC oil ministers failed to do any more to support crude prices than what had already been widely expected. Oil ministers on Thursday deemed the current production limits adequate for controlling prices. Some traders had been hoping that OPEC and non-OPEC participants in the deal might cut production even further, but this was apparently not to be the case.

Prior to Thursday’s OPEC meeting, USD/CAD had been in a virtual freefall as the US dollar continued to drop while the Canadian dollar had surged sharply on rising oil prices and after the Bank of Canada left its overnight rate unchanged at 0.50% on Wednesday but sounded significantly less cautious and less dovish than had been expected.

While the US dollar continued to be heavily pressured after Wednesday’s FOMC minutes, bearish momentum on Thursday had begun to dissipate, leaving the US dollar relatively flat and in a tight trading range. This stabilization of the US dollar and sharp OPEC-driven drop in the Canadian dollar on Thursday led to a pronounced rebound off a major support area for USD/CAD. This support area is at a confluence of the key 1.3400 support level and the bottom of a major parallel uptrend channel extending back to the beginning of the year. In the event that USD/CAD manages to stay above support and within this channel, it would bode well for a potential continuation of the longer-term bullish trend. On a shorter-term basis, any continued move up within the channel could next target a major resistance objective around the key 1.3600 level. 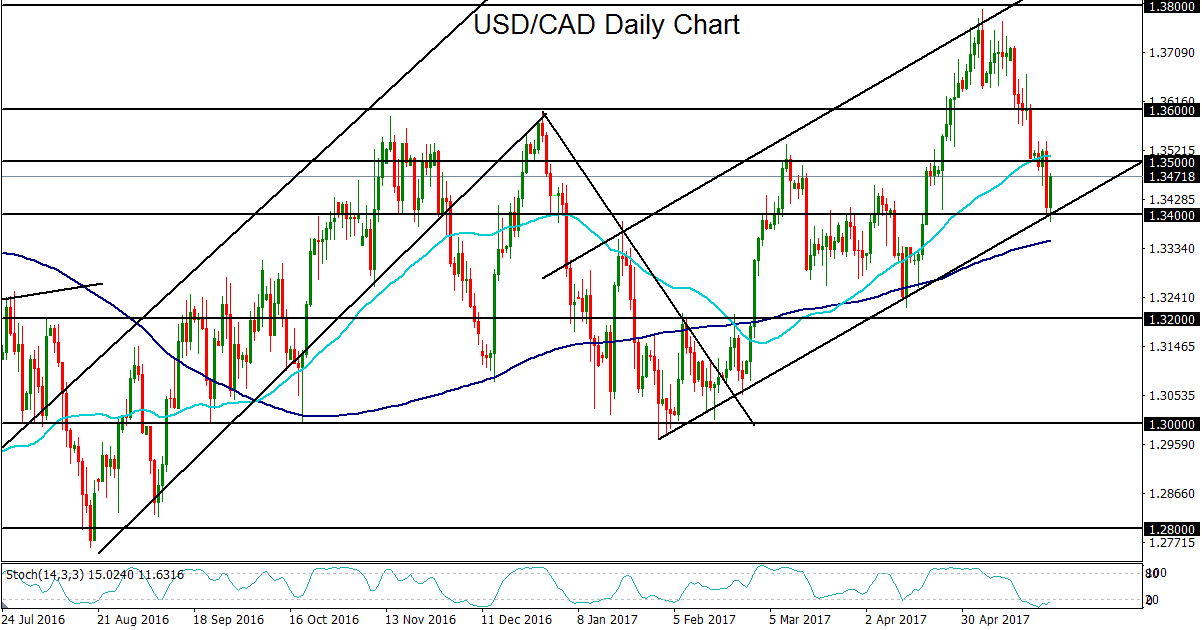