USD/CAD faces key test ahead of OPEC, BOC and NFP

As are as today is concerned, the falling Canadian dollar suggests FX market speculators are positioning themselves up for a slide in the price of oil. OPEC and non-OPEC oil producers such as Russia are meeting in Vienna and are likely to agree in extending crude output cuts until the end of 2018 in order to clear the global glut of oil. Speculators are wary of the inclusion of a clause providing for a review of the cuts at the next meeting, with a possible option of exiting the deal earlier if the market overheats. If this turns out to be the case, there is a possibility oil prices could fall sharply given their recent bullish run in the run-up to the OPEC meeting in anticipation of the cuts being extended. In other words, profit-taking is a strong possibility after OPEC’s decision is announced.

The drop in the Canadian dollar has lifted the USD/CAD pair to the key 1.2900-1.2935 resistance range again. Any clean break above here could potentially pave the way for a run towards the key 1.30 hurdle and possibly 1.3150 thereafter, which is an untested broken support level. On the other hand, if the above-mentioned resistance holds then price may drop towards the next support, which comes in at around 1.2820. If this level breaks down, then we could see a sharp move lower and the bias would turn bearish in the event the last low prior to the latest rally at 1.2680 also gives way. 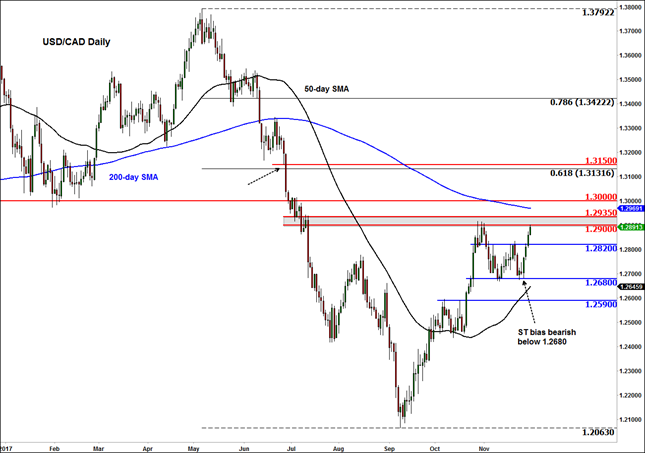