So, the USD/JPY crossed yet another milestone today as the yen fell to 150 per US dollar. This was the lowest level for the embattled Japanese currency since August 1990. Everyone and their dog were – and still are – watching this key level, which meant the pair would always react at this key psychological level upon the first touch. Expectations that crossing of the 150.00 handle might be the trigger point for some large options strategy or government intervention, saw that UJ drop by 35 pips immediately, before going into consolidation (see the inset on the USD/JPY chart). The important question is what’s next for USD/JPY? 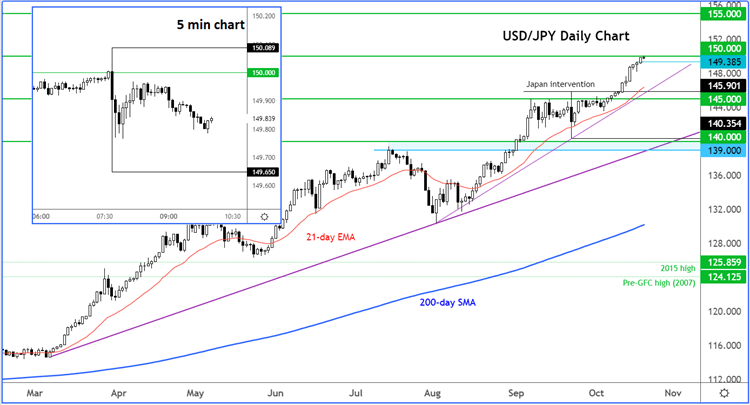 The USD/JPY is finding continued buying pressure on any dips because of the big divergence in US and Japanese monetary policies. The Fed is hiking and aggressively so, while the BoJ has remained the only major central bank not to drop its ultra-loose monetary policy despite the global inflation upsurge. For the USD/JPY to go down, the BoJ will have to change tack. Otherwise, watch out for renewed buying pressure above the 150 handle!

The Japanese government can burn all the dollar reserves it has but buying the yen will only be a temporary fix. Every time it has stepped in, the USD/JPY has repeatedly resumed its bullish trend after bouts of JPY strength quickly fizzled out.

The BoJ has allowed its currency to devalue sharply by keeping its yield curve control in place. It does so by purchasing JGBs with huge amounts of freshly printed yen. In effect, it is supplying the yen that the government is trying to soak up from the market. Hardly surprising then that the government’s interventions have proved to be futile.

The BoJ was at it again overnight. It announced emergency bond-buying operations after the yield on their 10-year government bond traded above the self-imposed 0.25% ceiling for a second consecutive day.

As my Asia analyst colleague Matt Simpson noted, it seemed “almost inevitable that USD/JPY will break [150.00], but the question is what will happen when it does.” Lo and behold, break the 150-barrie it did. Will it now “entice further stern ‘words’ from MOF or BOJ officials,” as Mr Simpson wonders?

But will it create an even bigger problem?

The above chart was shared by Valerie Tytel of Bloomberg. She warned that the break of the yield curve control (YCC) is a “possibility you can’t ignore.” This is because the 10-year yen swaps have started to rise noticeably above the threshold of 0.25% yield on the 10-year JGB. This shows that investors are hedging their bets by shorting JGBs, as they fear the YCC might be dropped.

Given the growing risk that the BoJ might be forced to drop its YCC, do watch out for a HUGE drop in USD/JPY if it does. That could trigger a move in JPY similar to the 2015 episode in the CHF when the Swiss National Bank dropped its EUR/CHF 1.20 floor.

This of course does not mean you should be shorting the USD/JPY, given that the trend has been very strong. But if you are long, proceed with extra care, always making sure to have a stop loss in place (maybe a guaranteed stop). If you are shorting the USD/JPY in anticipation of a potential drop in YCC, then always ensure you have appropriate risk management strategy in place – for example a stop loss some distance above 150 handle, in case the BoJ refuses to do that.

FedSpeak and jobless data up next

As we transition to the US session, we have jobless claims coming up at 13:300 BST. Claims are expected to tick modestly higher to 230k, up from 228k in the previous week. Federal Reserve speakers will also be in focus, with Jefferson, Bowman, and Cook due to hit the airwaves. The latest Fed official who spoke was Neel Kashkari, who hammered home the hawkish message saying that the Fed couldn’t consider pausing rate hikes while core inflation continued to rise.