VIX closes at a 13-month high as Ukraine-crisis intensifies 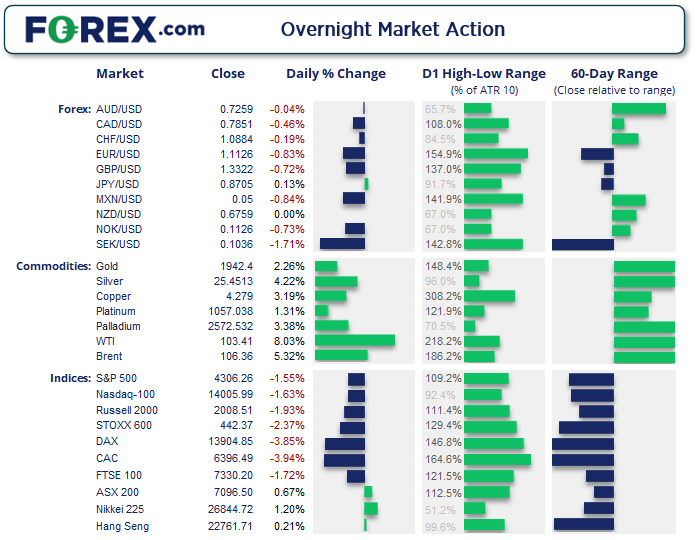 Russia has stepped up its attack on Ukraine after a convoy of Russian military vehicles over 40 km long reached Kyiv. Although simultaneous attacks are continuing across multiple cities throughout Ukraine.

Volatility was higher for multiple asset classes overnight as risk-off trade resumed. Wall Street was broadly lower with Nasdaq banking stocks falling over -5% and the Nasdaq down -1.6%. The S&P 500 is back below yesterday’s open as choppy trading persists. The VIX closed to a 13-month high just below 35, gold rose to 1944 and oil hit fresh highs.

Oil is on fire, both literally and metaphorically. Russia has ratcheted up its attack on Ukraine and has bombed fuel facilities, whilst the IEA agreed to release 60 mln barrels of oil in a move to cool rising prices. It hasn’t worked. Crude oil rallied over 12% during its highest level in 7.5 years before pulling back to 104. ASX energy stocks were already the best performers year-to-date by yesterday’s close, and we see little reason for them to be knocked from their perch today irrespective of that happens at the OPEC meeting. The main question for traders is whether OPEC will stick to the agreed 400-bpd increase or raise output at a faster rate to take the heat out of oil’s Ukraine-crisis-fuelled rally.

JPY and USD were the strongest major currencies

With European NATO allies potentially on the brink of sharing a closer border with Russia, the euro was the hardest hit major currency overnight. EUR/CAD probed the January low and EUR/CHF sank to its lowest level since the infamous January 2015 (when SNB removed the Swiss franc peg to the euro). 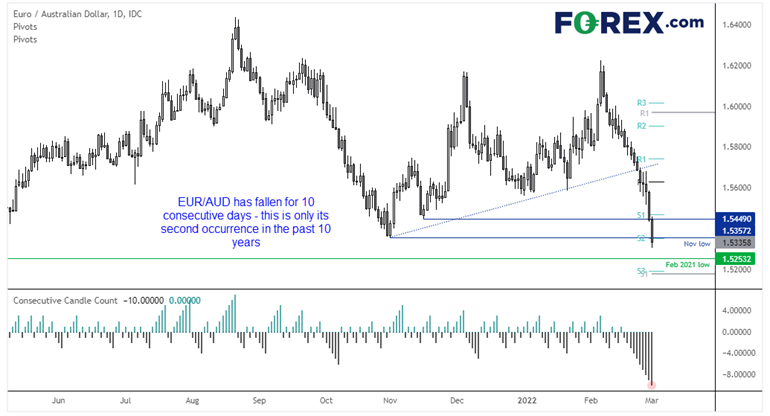 EUR/AUD has now fallen over -5% from this month’s high and has traded lower for 10 consecutive days. This is only its second 10-day bearish streak in 10 years. At some point mean reversion will kick in but only when sentiment allows it to. From here, the February 2021 is less than a day’s ATR away although something to look out for is whether prices can now remain below the November 2021 low. As a break back above it could be an early indication that mean reversion is finally underway. Although that likely requires a positive headline or two from the Ukraine crisis to appear, before we can expect a sustained countertrend rally. 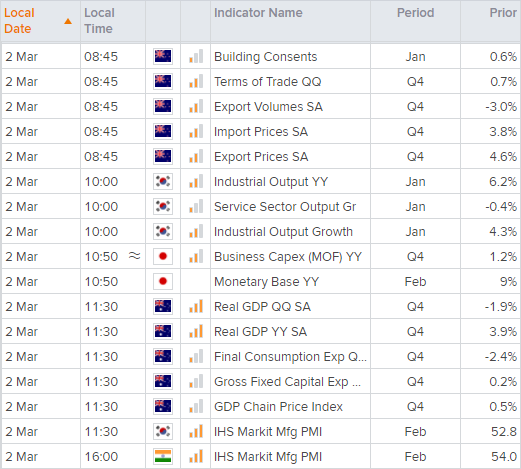