Watch for Brexit aftershocks next week

It was a black Friday in the financial markets after Britain voted to leave the EU in a historic referendum which saw David Cameron resign as Prime Minister. As it became clear that the outcome of the UK referendum was going to be an exit from the EU, the pound literally got pounded as it dropped from an overnight high of 1.50 to sub 1.33 when the news was confirmed, while the FTSE tanked nearly 10% at the open. Most people were undoubtedly wrong-footed given how confident some betting companies were in pricing in the odds for remain. Naturally, the markets then rebounded sharply off their lows as you would expect. The impact of short-side profit-taking and dip-buying provided some relief. In fact, the FTSE was able to go from being minus 8 to minus 2 per cent at one stage on Friday. But we are not convinced the bounce will last long. Clearly some investors will look to unload their long equity holdings or hedge their exposure by shorting the FTSE at these higher levels in early next week. This should put further downward pressure on the markets on Monday.

Central banks could come to the rescue

The Brexit saga will rumble on for weeks and months to come and UK- and EU-based assets will garner most of the attention as a result. Traders and investors will continue to digest the news and consider the wider political and economic implications of the exit vote. But the Bank of England has already provided assurance to the markets, saying that it will not hesitate to take additional measures if required. The UK central bank could easily expand QE and cut interest rates to zero. Then, there is the European Central Bank, which is already scooping up huge amounts of government and corporate bonds. The ECB could extend the duration of its QE programme. Elsewhere, the Bank of Japan could step in to limit the flows into the safe haven yen, which has rallied aggressively along with gold. The Fed may now turn back dovish and keep rates as they are for a lot longer than previously planned. So, the possibility of further central bank support could help limit the potential falls for stocks in the upcoming weeks. But words alone will probably not be enough and the markets will surely now be demanding action from some of these central banks.

As mentioned, traders will now expect the US Federal Reserve to remain on hold for a lot longer than planned, especially if the non-farm payrolls report, due out in a couple of weeks’ time, disappoint expectations again. This could weigh on the US dollar against some of the stronger currencies such as the Japanese yen. But the Dollar Index may nevertheless rise if the EUR/USD and GBP/USD exchange rates decline further due to Brexit worries. Thus, should buck-denominated precious metals rise further, it will probably come because of increased safe haven flows.

Meanwhile we do have the US final GDP estimate (Tuesday) and some Chinese manufacturing data (Friday) to look forward to next week. The Chinese figures in particular could lead to some further short-term volatility, especially if the numbers disappoint expectations. But on the whole, next week’s economic numbers are unlikely to garner much attention given what has happened this week. Looking beyond next week, we have earnings season for a host of US companies and the June jobs report to look forward to in early July.

So, economic and political uncertainty is going to be the dominant theme in the next few weeks. But on a brighter note, this should mean volatility would be higher than usual for this time of the year, which in turn could offer plenty of trends or short-term opportunities for speculators to take advantage of. Traders should definitely see this as opportunity, and look forward to the start of the new trading week. Many traders who have been on the side-lines until now will probably start to come back into the markets in early next week. This group of market participants have seen the aftereffects of the Brexit vote and will have had the whole of the weekend to prepare for next week. They will certainly be watching the close on Wall Street today. While short-covering has seen the stock markets recover a significant portion of their earlier losses, if US indices start to roll over later on then that could be an indication of what to expect on Monday.

Unsurprisingly, the FTSE was unable to climb out of its bearish channel on the weekly chart following the Brexit vote. Surprisingly, however, the index still managed to close higher for the week after staging a significant recovery in the second half of Friday’s session. This strength should not be ignored. But the damage may have already been done and with sentiment being shaky the FTSE could start rolling over once again. It could decline in early next week towards prior supports such as 6050, 5920 or even test the early 2016 low at 5500. With the 55-week moving average recently crossing below the 200-week moving average, the long-term trend has objectively turned negative. Only a break outside of the bullish channel would invalidate this bearish scenario. Until and unless that happens, the path of least resistance is now clearly to the downside for the FTSE.

Following the Brexit vote, gold rallied along with other safe haven assets. It took out the prior swing high at around $1300 before climbing above to the 200-week moving average to nearly touch the long-term bearish trend line at $1360. This level will be very important to watch going forward. If broken, it would confirm the long-term reversal pattern that we have already seen in gold this year. The short-term outlook is clearly bullish now and will remain that way unless gold breaks back below $1300 support. In addition to the long-term bearish trend line, some of the potential resistance levels or bullish targets are shown on the chart in red. Among others, the 38.2% Fibonacci retracement of the long-term downswing comes in at $1380. Given its close proximity to the bearish trend line ($1360), price action around this $1360-$1380 area should be interesting to observe next week, should we get there. 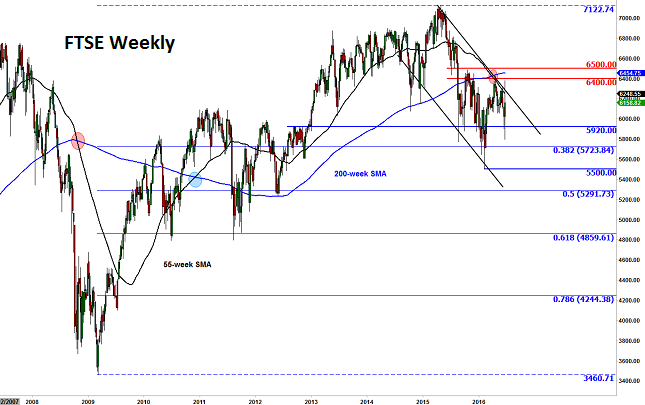 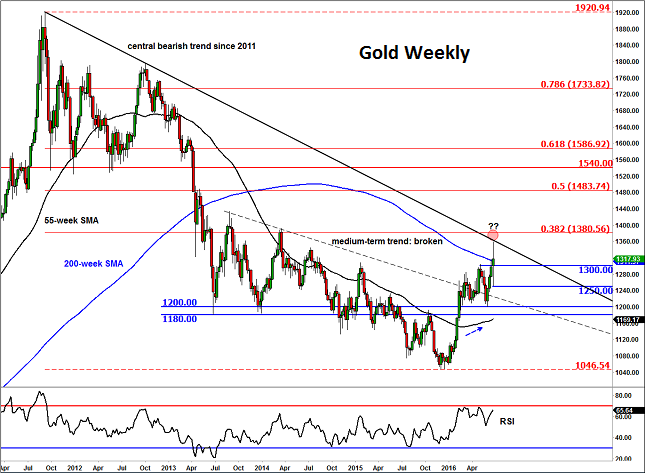