Will EUR/AUD continue to break lower?

When the ECB meets in less than 24 hours, it will decide between raising interest rates by 25bps or 50bps.  In addition, it will unveil a new bond buying vehicle which will take maturing proceeds of its bond holdings (from its prior bond buying programs) and reinvest them in peripheral country bonds in the Eurozone whose yields are climbing faster than those yields of the core Eurozone countries (i.e. Italy). (See our complete ECB preview here). But the key question for EUR/AUD is, “Will the ECB be more hawkish than the RBA?”  The RBA hiked rates 50bps for the second meeting in a row to bring rates to 1.35%.  The RBA minutes from the July 5th meeting said that “the level of interest rates was still very low for an economy with a tight labor market and facing a period of higher inflation”.  How much will the RBA hike at its next meeting on August 2nd?

EUR/AUD had been declining since February 4th, when the rate exchange rate was 1.6225.  The pair made an intraday low at 1.4320 on April 4th.  EUR/AUD then bounced in and ascending wedge pattern to the 50% retracement of the move and held under horizontal resistance at 1.5354 on July 1st.  Since then, the pair has been moving lower and on July 7th, broke below the bottom trendline of the wedge near 1.4970.  Today, EUR/AUD reached its lowest level since May 5th near 1.4750.  The target for the breakdown of an ascending wedge is a 100% retracement, or near 1.4320. 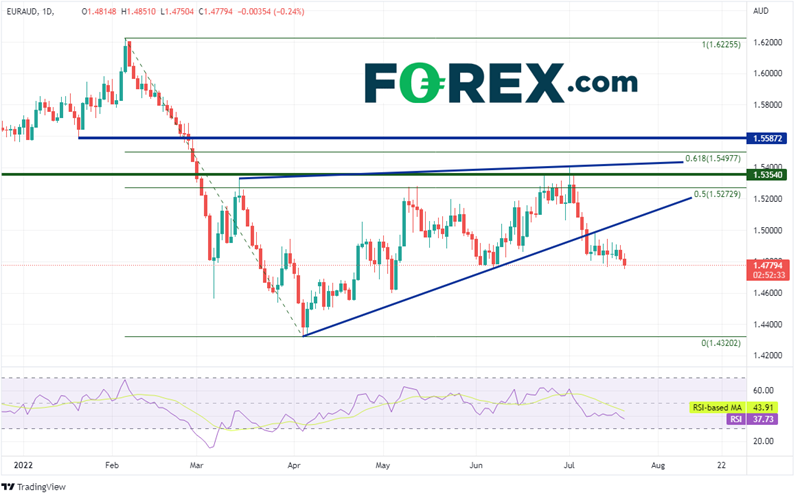 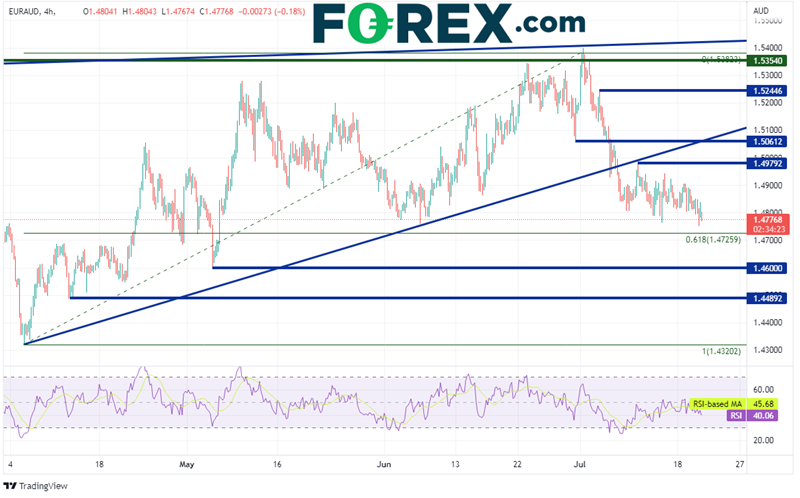 EUR/AUD has been moving lower out of an ascending wedge since July 7th.  Will it continue to move lower?   The next move may depend on how hawkish the ECB is at the upcoming interest rate decision meeting.