CFDs on Crude Oil and Brent Crude Oil broke out above October 2021 highs and traded to their highest levels since October 2014. WTI Crude Oil reached an intraday high of 87.90 and Brent Crude Oil reached an intraday high of 88.64. With inflation touching 7% in the US and 5.4% in the UK, it’s no wonder that oil is trading near new near-term highs!  In addition, OPEC announced that they see the oil market well-supported this year by robust demand, primarily due to the continued reopening of economies after the coronavirus. On the supply side, some OPEC+ member nations are having trouble keeping up with the supply quotas, which is also helping to drive prices higher.  Add to that geopolitical unrest in the Persian Gulf and Russia.  These are all factors helping to push prices of the two Crude Oil instruments higher.

WTI Crude Oil had been moving higher since putting in a pandemic bottom in April 2020; however it picked up steam on December 2nd after testing the lows from August 20th, 2021, near 61.87.  After failing to push lower, WTI moved higher and on January 18th it took out the recent highs from October 25th, 2021, which was the neckline of a double bottom.  The target for the double bottom is near 108.00! However, if price is to get there, it must first break above a confluence of resistance near 91.60, which is horizontal resistance, an upward sloping trendline, and the 127.2% Fibonacci extension from the October 25th, 2021 highs to the December 2nd 2021 lows.  Above there, the 161.8% Fibonacci extension comes in at 99.56. However, price action on the daily timeframe formed a shooting star, an indication that price may be ready for a near term pullback.  Price is currently hovering around the first support at the double bottom breakout level of 85.39.  Below there, price can fall to previous support at 76.88 and then the 50- and 200- Day Moving Averages at 75.77 and 72.39, respectively. 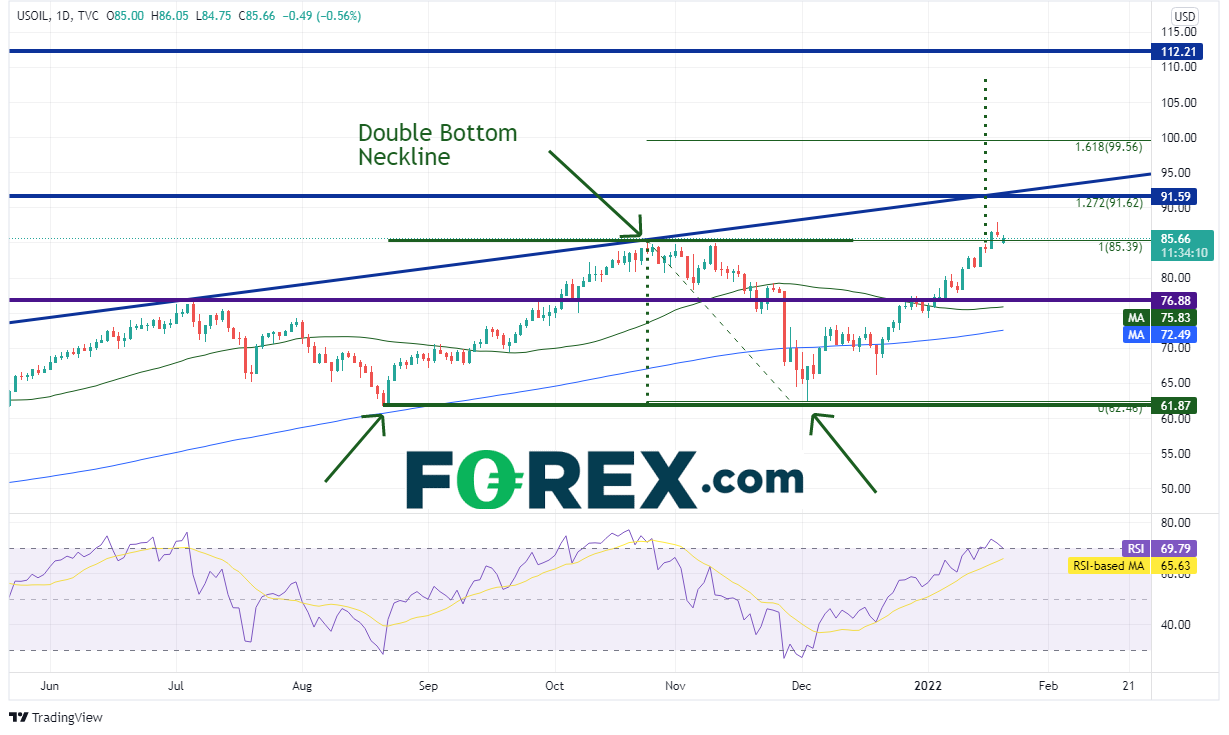 Brent Crude Oil has been trading in a similar fashion to WTI.  It also has been moving higher since the pandemic bottom in April 2020.  However, Brent has been moving higher in a more orderly manner inside a channel.  After a false breakdown below the channel on December 2nd, price began moving higher towards the tops of the channel.  On January 18th, Brent took out the recent highs from October, which was the neckline of a double bottom.  The target for the double bottom is near 108.15!  However, as with WTI, price must first push through some resistance levels to get there. First resistance is at 91.38, which is the 127.2% Fibonacci extension from the highs of October 25th, 2021 to the lows of December 2nd 2021.  Above there, resistance is at the top, upward sloping trendline of the long-term channel near 94.70, the 161.8% Fibonacci extension from the same timeframe near 98.37, and horizontal resistance from 2014 at 103.42. Price action did not form a shooting star in Brent, leaving hope for more upside.  Support is at the October 25th highs and the double bottom neckline at 85.88.  Below there is horizontal support at 80.05 and the 50-Day Moving Average near 78.32. 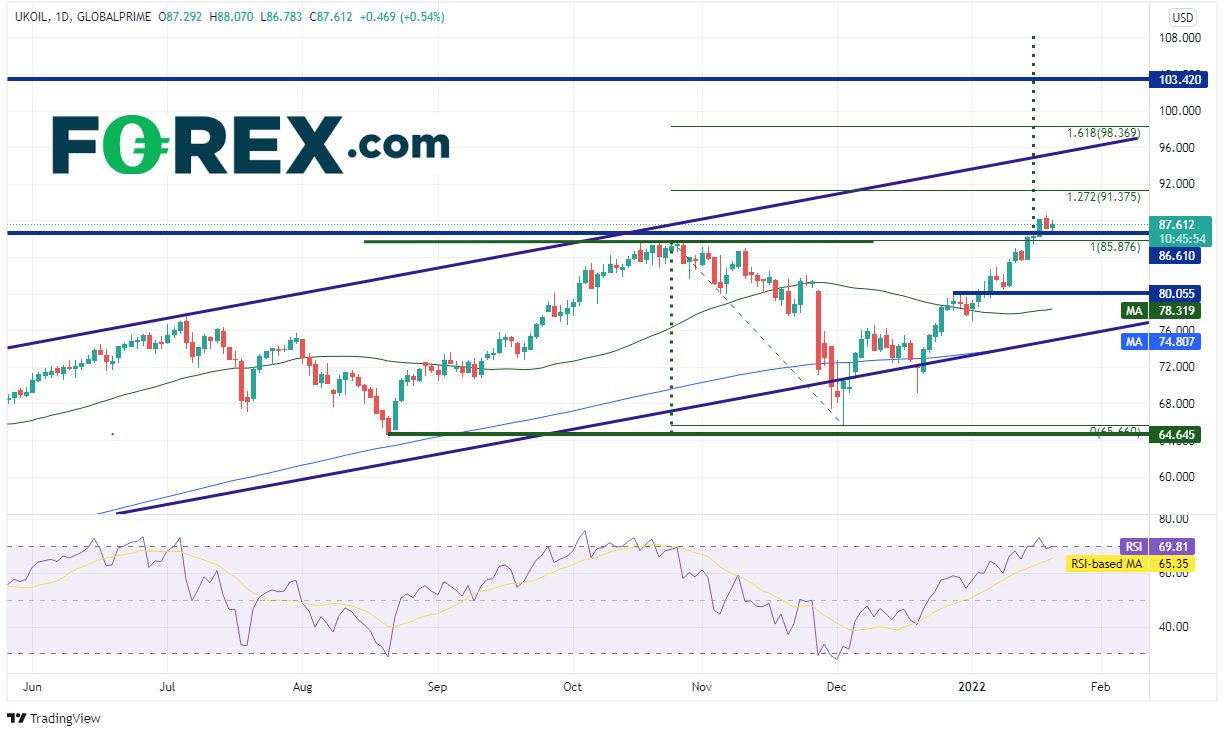 Both WTI and Brent have traded to their highest levels since 2014. Demand is robust and OPEC+ continues to have supply issues from some member countries.  Will this allow oil to continue higher? The break of the double bottom neckline on both oil instruments says there’s a chance!