Yen gaining on speculation of BoJ action next week

Yen pairs are having another large sell-off today as speculation runs rampant that the BoJ may act again when it meets next week to discuss monetary policy.  Recall that at its December meeting, although the BoJ didn’t call it Quantitative Tightening, the central bank widened the band around its 10-year target from .25 to .50. This allows the longer-term interest rate to rise further. Yen pairs fell aggressively on hope that this could be the beginning of the end for QE. Could a similar action be taken when the central bank meets again next week?  According to Yomiuri (Japan news service), the BOJ will discuss the effects of its extraordinary monetary policy and consider adjusting its policies again.  In addition, earlier this week, Tokyo released December CPI.  Some use this as a proxy for Japan’s inflation.  Headline CPI rose to 4% YoY from 3.8% YoY and Core CPI rose to 4% YoY from 3.6% YoY.  BoJ Governor Kuroda continues to say that the inflation is transitory.  Traders are hoping that if the BoJ acts again next week, they will be ahead of the decision.

After the December BoJ meeting, USD/JPY fell over 500 pips as the pair continued to fall from its October highs in an orderly, downward sloping channel.  Today’s selloff on the daily timeframe is over 330 pips. USD/JPY continued to selloff after the December US CPI came in lower once again.  The MoM reading was -0.1%, the first negative print for the inflation data point since May 2020.  In addition, the YoY number fell to 6.5% vs a previous reading of 7.1%.  If USD/JPY continues to move lower, the next support level is at the 61.8% Fibonacci retracement level from the 2022 low to high.  Below there, horizontal support crosses at 126.36. 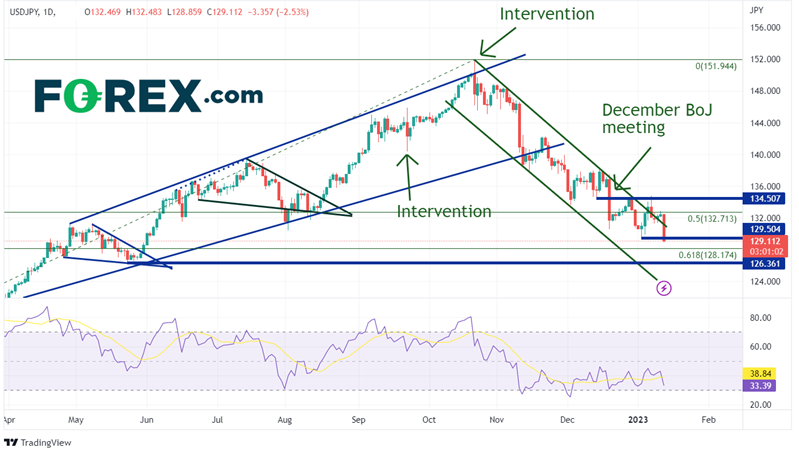 However, the Yen isn’t just gaining against the US Dollar.  EUR/JPY is also down over 200 pips.  After rising in an ascending wedge for most of 2022, the pair traded to its highest level since 2014 at 148.40.  However, on the day of the last BoJ meeting, EUR/JPY broke below the bottom trendline of the wedge and retraced to the 38.2% Fibonacci level from the 2022 low to the 2022 high at 139.23.  Price bounced from there, however is approaching the level once again.  Support below is at the January 3rd lows of 137.38, then the 50% retracement level from the above mentioned timeframe at 136.40. 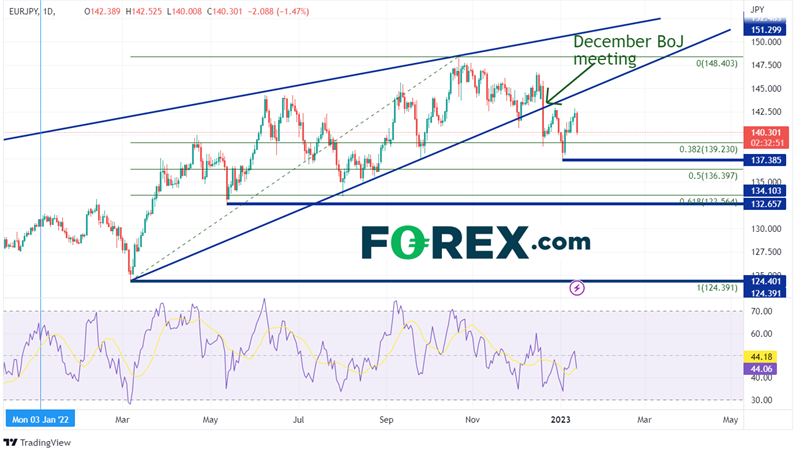 With speculation that the BoJ may act at next week’s meeting, traders are trying to stay ahead of any adjustments to Monetary Policy.  At the December BoJ meeting, traders were caught offsides.  However, traders won’t let that happen again when the central bank meets next Wednesday!