Our Favorite Fib is a Fibonacci-based strategy that takes advantage of momentum. It can be used on various time frames and markets, including FX majors, stock indices and commodities, providing the trader with endless opportunities. The strategy could be used, for example, after some major economic news – ideally, at the earlier stages of the move following the news. But if the news merely causes a corrective rally or sell-off inside an established trend, then this strategy won’t work as well. Thus it is suited for markets that are in a clear strong trend e.g. when price is making fresh all-time or multi-year/month highs or lows.

The higher the time frame, the more effective the F/F strategy works. It is typically used on 1 or 4 hour time frames, although sometimes it could be applied to the daily time frame, too. The shortest time frame that one can use this is strategy on is about 15 minutes. However if the trade is based on a higher time frame, then it is a good idea to zoom in to a 5-minute chart in order to refine entry.

Components of the strategy

To understand how the strategy works, let’s say that following a strong upward move (e.g. from point A to B), the market retraces a little (to point C) because of profit taking and/or top picking, before continuing in the original direction (beyond point B). This strategy requires 3 price swings – the move from point A to B, B to C (correction), and C to D (extension). Here is how an F/F buy strategy would typically look like:

In the F/F strategy, we are interested in some part of the CD leg of the move – the bit beyond point B, where entry is based. The profit target would be determined by a Fibonacci extension level of the BC move (more on this below).

One condition for this strategy to work well is that we need momentum. By definition, this implies point C should represent a shallow retracement of AB, and then a continuation in the original direction, beyond point B. Therefore, if price retraces more than 50%, or too much time elapses, before it breaks point B, then the entry signal would not be valid.

In other words, for optimal entry signal, we need a strong move from point A to point B; a relatively quick and shallow retracement of less than 50% to point C, and then a continuation towards point D.

Once point C is established, all of the strategy’s parameters can be determined. Before discussing the entry and closing levels in detail, here are a few examples of how the strategy would work: 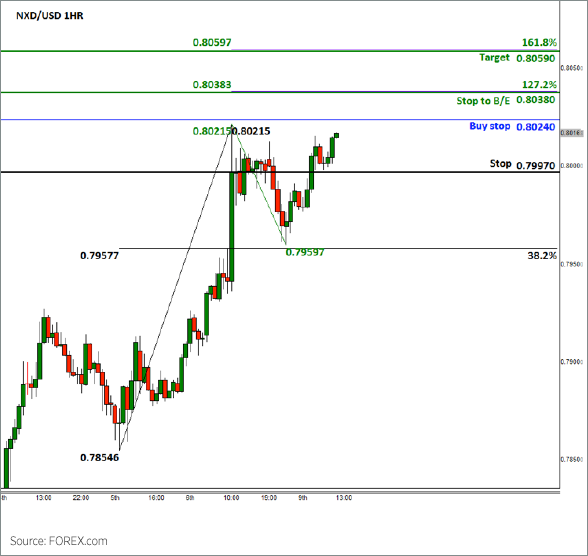 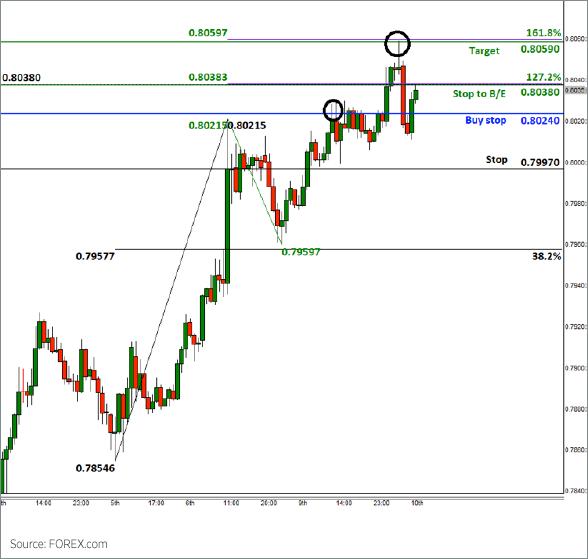 Example 2: Buy GBP/USD ahead of a key economic release
Before: 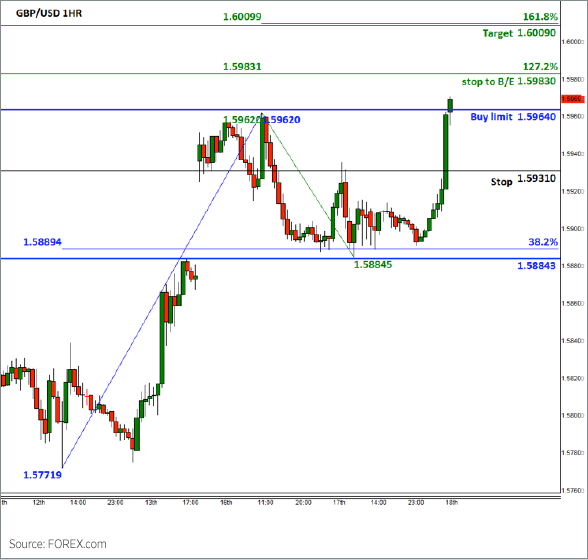 (note that the 261.8% extension could have been a better target, in this case) 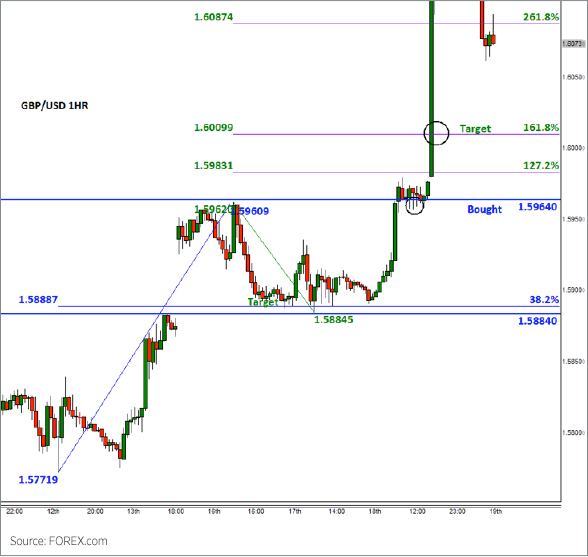 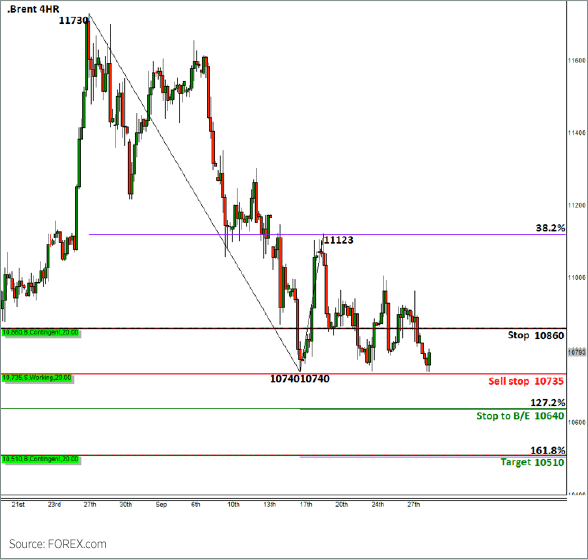 (due to false breakout and/or premature entry) 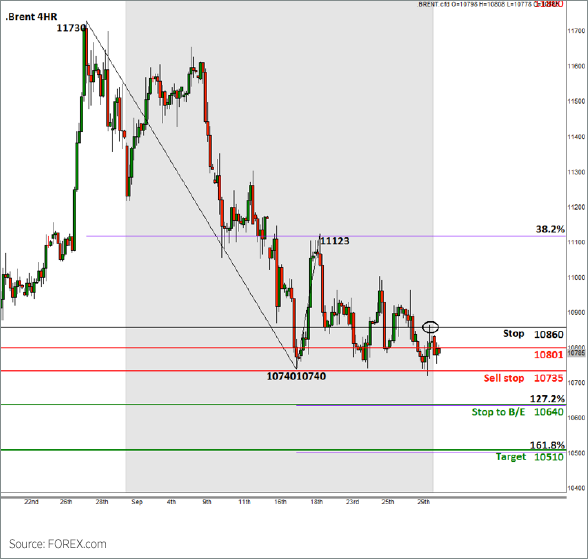 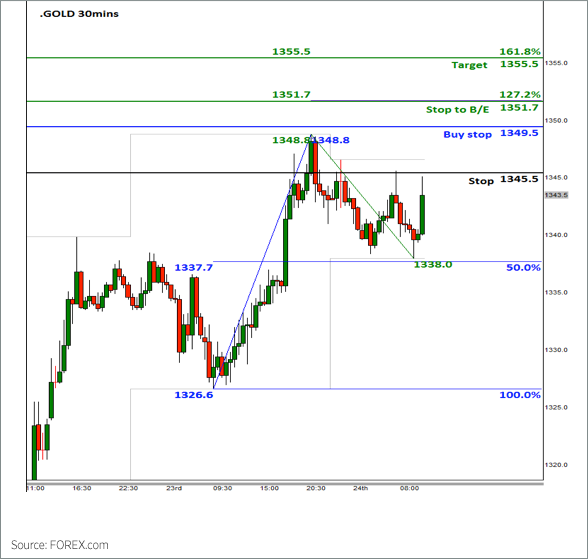 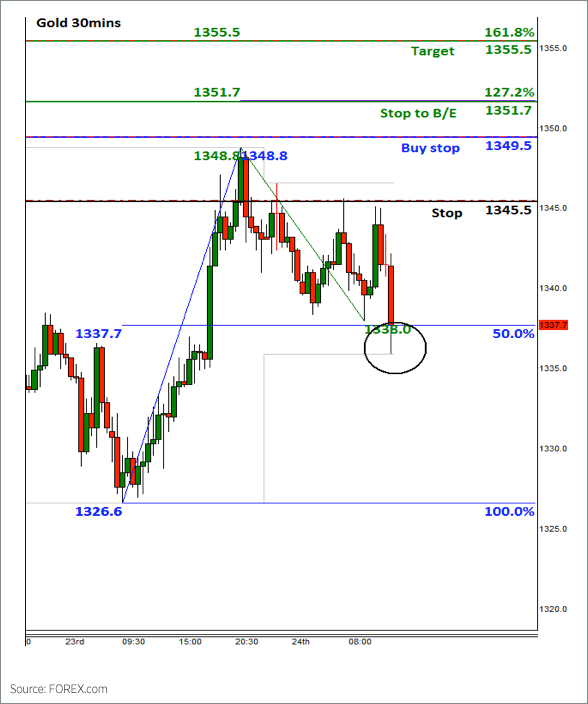 The entry would be based on break of point B and the objective is to ride the move towards point D – which would be a Fibonacci level, determined by the BC swing.

If the entry is based on a higher time frame like the 4 hour chart, the trader may wish to hold fire and zoom into a 5 or 10 minute chart and wait until price closes above (below) point B on the lower time frame before buying (selling).

The F/F strategy has two targets

One way to estimate which level price would most likely extend to, is by looking at the retracement of the AB swing i.e. point C. If the retracement is around 38.2% or lower then point D could be at the 161.8% or sometimes 261.8% extension of BC. However if price achieves a deeper retracement, say to the 61.8% or 78.6% Fibonacci level of AB, then one should expect point D to complete around the 127.2% extension of BC. Of course this would not be a valid Favourite Fibo entry, since the retracement was greater than 50%.