#UK - IRELAND#
BP, oil major, announced 2Q results: "Underlying replacement cost loss for the quarter was 6.7 billion dollars, compared with a profit of 2.8 billion dollars for the same period a year earlier. The result was driven primarily by non-cash Upstream exploration write-offs - 6.5 billion dollars after tax (...) combined with the impact of lower oil and gas prices and very weak refining margins, reduced oil and gas production and much lower demand for fuels and lubricants. Oil trading delivered an exceptionally strong result. (...) A dividend of 5.25 cents per share was announced for the quarter, compared to 10.5 cents per share for the previous quarter."

Hugo Boss, a German premium-apparel company, announced that it swung to a 2Q net loss of 186 million euros from a net income of 52 million euros in the prior-year period on sales of 275 million euros, down 59% on year. The Company said: "Retail sales trends during the second quarter have shown a sequential improvement month by month. This positive trend has also continued so far in Q3, as HUGO BOSS has recorded further improvements in its global retail operations during the month of July."

Fraport, the operator of Frankfurt airport, posted a 1H net loss of 231 million euros, compared with a net income of 165 million euros in the prior-year period on revenue of 911 million euros, down 49% on year. The Company pointed out: "Frankfurt Airport's passenger traffic plummeted by 94.4% year-on-year in the April-to-June 2020 period, while falling by a total of 63.8% during the entire first half."

Infineon Technologies, a semiconductors maker, reported that it swung to a 3Q net loss of 128 million euros from a net income of 224 million euros in the prior-year period.


#SWITZERLAND#
Novartis, a Swiss maker of pharmaceutical products, reported positive results from a Phase 2 trial of Kymriah (tisagenlecleucel) in patients with relapsed or refractory follicular lymphoma.


#DENMARK#
FLSmidth & Co, a machinery firm, reported that 2Q EBITA decreased 73% on year to 131 million Danish Krone on revenue of 3.85 billion Danish Krone, down 30%. The Company said: "The clear majority of the revenue decline was attributable to COVID-19, but the change was also a result of a lower backlog entering the year."
From a weekly point of view, the stock remains within a bearish channel since June 2018. Below 214.7 krone, targets are set at 170 Krone and 134.30 krone in extension. 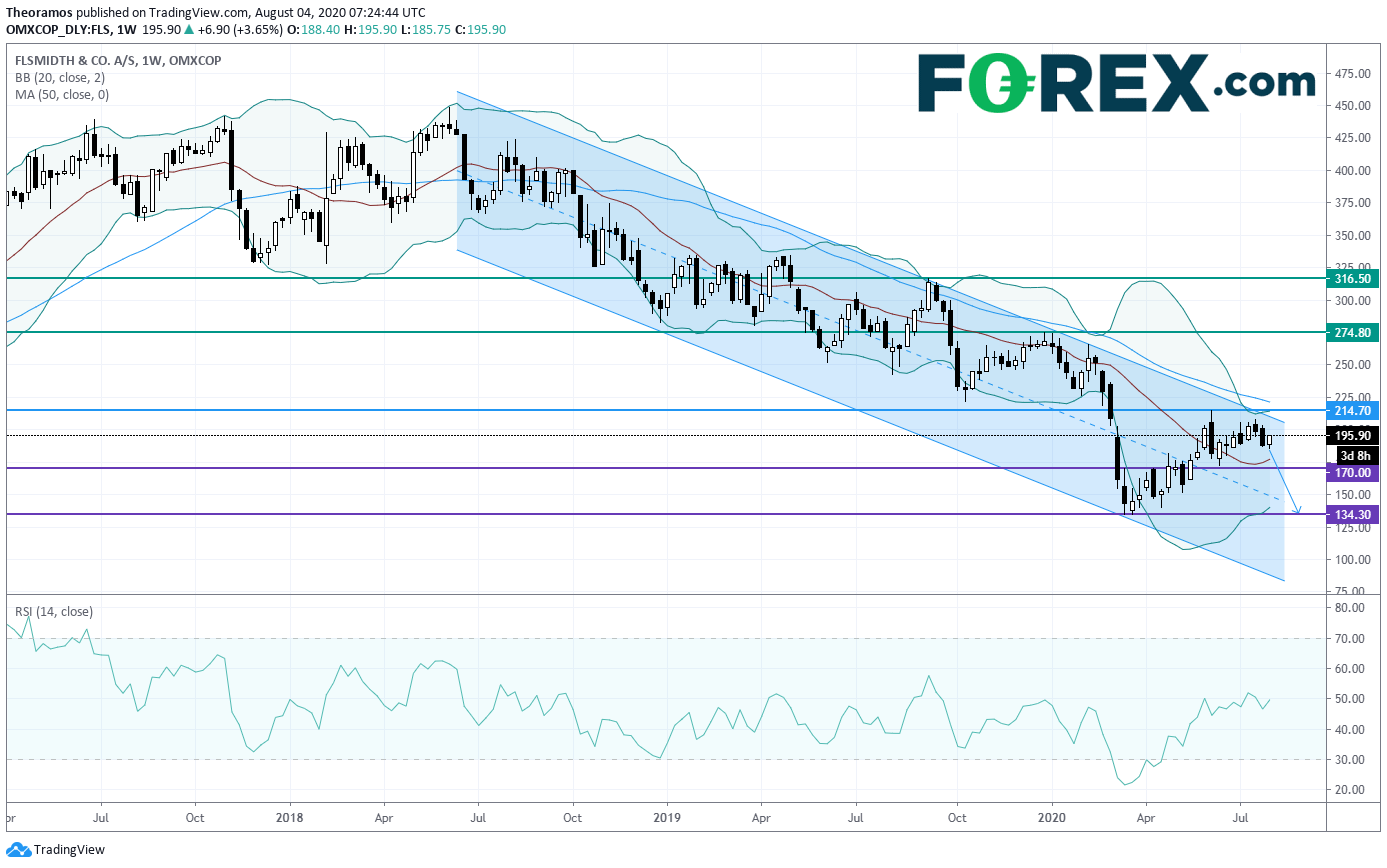