The S&P 500 Futures are extending their uptrend in a still uncertain U.S. election outcome

The S&P 500 Futures are extending their uptrend in a still uncertain U.S. election outcome. In any case, the next senatorial majority will be short, limiting the room for manoeuvre of both parties.

European indices are on the upside despites several disappointing economic data releases. The European Commission has indicated that it anticipates that the decline in GDP for the euro zone in 2020 will be 7.8%, a better figure than the 8.7% previously expected. Yet, the rebound in GDP expected for 2021 has been significantly revised lower from 6.1% to 4.2%. Separately, euro zone retail sales declined by 2.0% in September vs a 1.5% decline expected and after an increase of 4.2% in August (revised from +4.4%). The Bank of England (BoE) decided to keep interest rates on hold at 0.10% as expected. BoE announced an increase of 150 billion pounds in its asset repurchase program, bringing it to 895 billion pounds to cope with the negative consequences of the second lockdown. Also, in Germany, industrial orders only rose 0.5% in September while +2.0% was expected and after a 4.9% increase in August (revised from +4.5%). In addition, the PMI construction index fell to 45.2 in October from 45.5 the previous month. In Great Britain, the PMI Construction Index fell to 53.1 in October from 56.8 the previous month and 55.0 expected.

WTI Crude Oil futures are drawing a consolidation of the recent rally that saw prices rising 15% in a week. The U.S. Energy Information Administration (EIA) reported that U.S. commercial crude oil inventories (excluding those in the Strategic Petroleum Reserve) decreased by 8.0M barrels from the previous week to 484.4M barrels for week ending October 30. Besides, U.S. crude oil output decreased to 10.5M b/d from 11.1M b/d

On the US economic data front, the Mortgage Bankers Association's Mortgage Applications rose 3.8% for the week ending October 30th, compared to +1.7% in the previous week. Automatic Data Processing's Employment Change showed that 365K jobs were added on month in October (643K expected), compared to a revised 753K jobs added in September. Finally, the Trade Deficit shrank to 63.9 billion dollars on month in September (as expected), from a revised 67.0 billion dollars in August.


Gold bounces as the U.S dollar continues to lose ground on rallying equities before Fed decision.

Qualcomm (QCOM), a maker of digital wireless communications equipment, soared post market after reporting reported fourth quarter adjusted EPS of 1.45 dollar, beating estimates, up from 0.78 dollar a year ago on revenue of 8.4 billion dollars, significantly above the consensus, up from 4.8 billion dollars a year earlier. 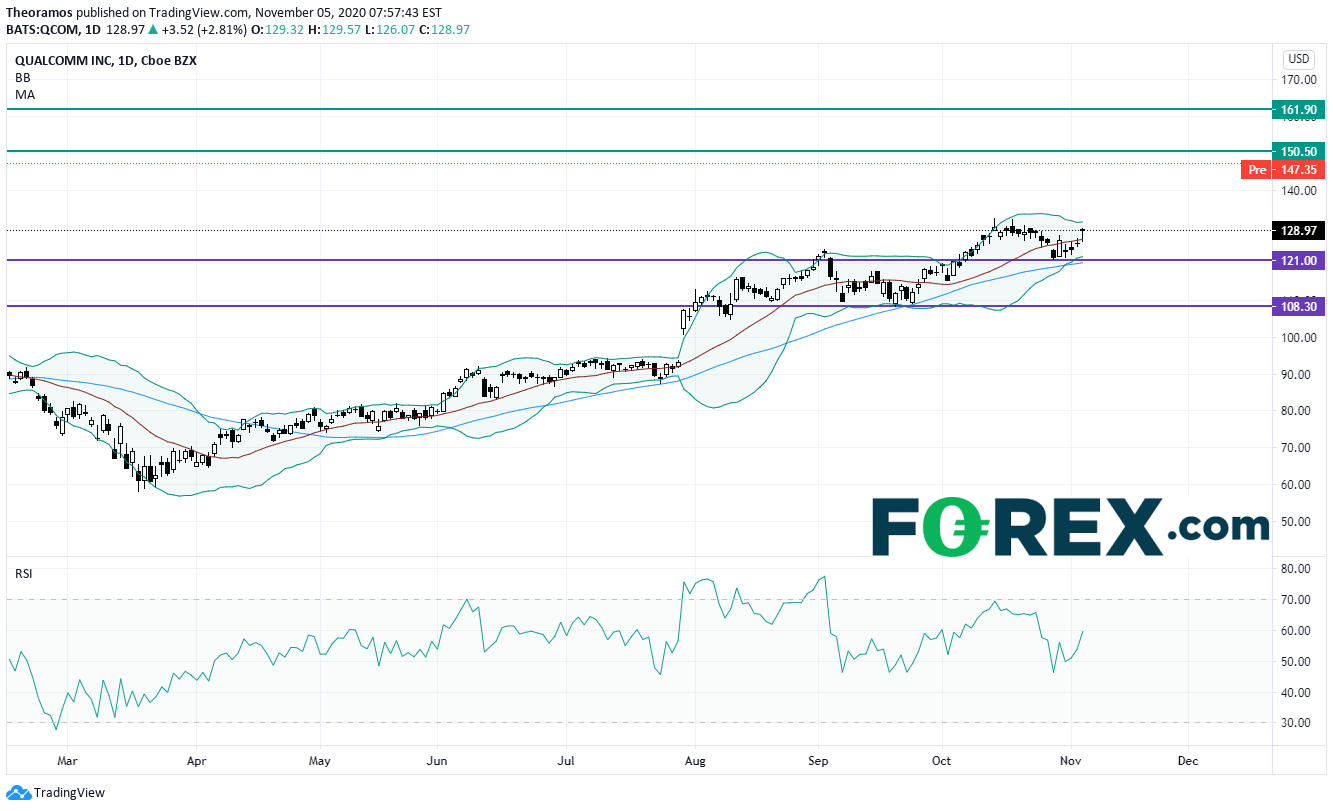 Apple (AAPL), the tech giant, may face shortgages in power chips for iPhone 12, according to Bloomberg.

Allstate (ALL), the insurance company, disclosed third quarter adjusted EPS of 2.94 dollars, better than expected, up from 2.84 dollars a year ago.

Albemarle (ALB), the world's largest lithium producer, announced third quarter adjusted EPS of 1.09 dollar, above the consensus, down from 1.53 dollar a year ago, on net sales of 746.9 million dollars, also above forecasts, down from 879.7 million dollars a year earlier.

Apache (APA), an energy exploration and production company, revealed third quarter adjusted LPS of 0.16 dollar, beating estimates, vs an LPS of 0.29 dollar a year earlier on revenue of 1.1 billion dollars, above estimates, down from 1.5 billion dollars a year ago.