With the world beginning to gain control over the coronavirus pandemic, watch for central banks to continue to normalize monetary policy

Central Banks around the world are trying to determine when is the right time to begin normalizing monetary policy.  Some are at the point where they are ready to hike rates, some are in the process of tapering,  and some have done nothing.  With the Norges Bank, BOE, FED, Riksbank, BOJ, and SNB set to meet next week, changes may be ahead.  Below are 10 of the most popular central banks and where they stand regarding monetary policy:

Everything you need to know about Tapering

Norway’s Norges Bank held rates unchanged at their August meeting, however they reiterated that they expect to hike at the September 23rd meeting.  Their latest inflation report showed that August CPI rose by 3.5% YoY and Unemployed Persons fell from 101,800 to 93,910 in August. The Norges Bank is expected to be the first central bank in the developed world to hike rates.

The RBNZ was ready to hike rates at their last meeting in August, however they decided to delay after a bout of coronavirus cases caused snap lockdowns.  After improving virus conditions and a blowout Q2 GDP this week, the RBNZ is all but certain to raise rates when they meet in October.  There is even speculating that the central bank could raise rates from 0% to 0.5%! 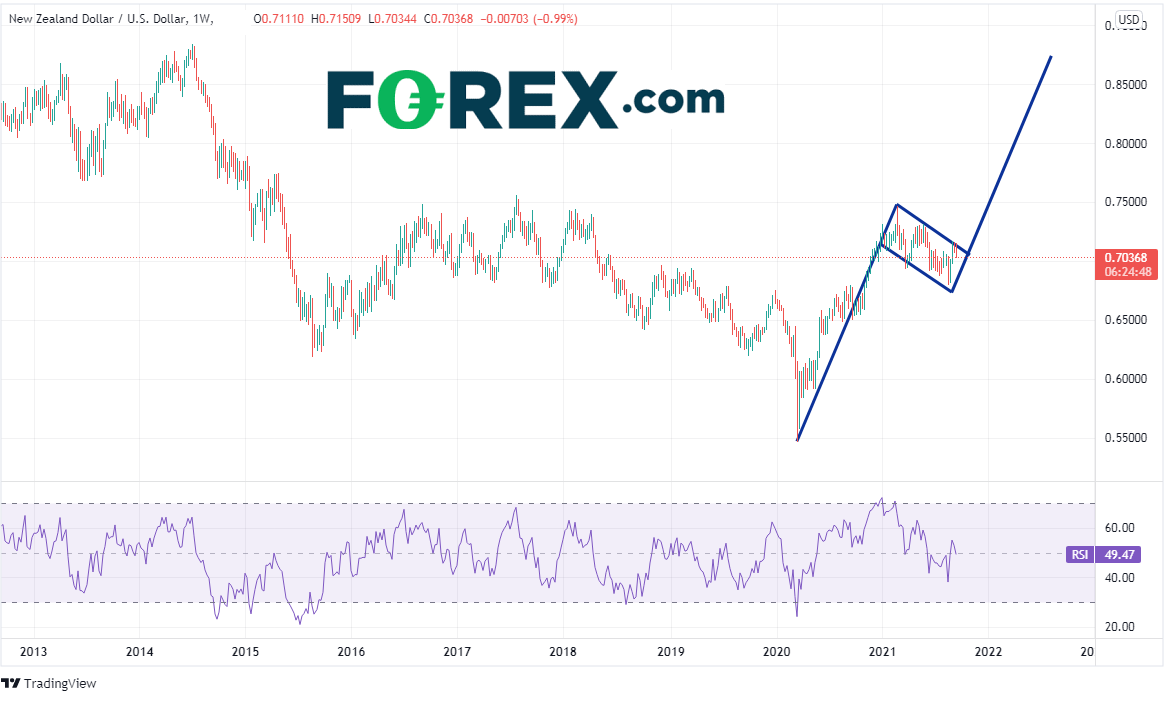 The BOC left the pace of their bond purchase unchanged at C$2 billion per week at their September 9th meeting.  However, they have been gradually tapering.  The committee continues to see expansion through the second half of 2021, however once they complete their quantitative easing program,  they will wait to raise rates until their 2% inflation target is sustainably achieved, which they expect to be in the second half of 2022.

The BOE hasn’t tapered bond purchases since June, when they lowered the pace of buying from 4.4 billion Pounds per week to 3.4 billion Pounds per week. At their last meeting in July, the central left the total amount of their quotative easing program at 875 billion pounds. However, they noted that they would start reducing the stock of bonds when rates reached 0.5% by not reinvesting gains and they would consider starting to sell bonds once rates reached 1%.  Last week, BOE Governor Andrew Bailey said members were split 4-4 as to whether minimum conditions have been met for and interest rate increase.  The UK economy continues to expand after the reopening, with better jobs data higher inflation data this week.  The BOE meets next week.

Australia’s central bank cut the pace of their bond purchases from A$5 billion per week to A$4billion per week, as they said they would at their July meeting.  However, the RBA also said that they will keep quantitative easing at this pace until at least mid-February 2022.  Australia has been hit hard over the last few months by the coronavirus, with August’s Employment change showing 146,300 jobs were lost. However, as vaccinations increase, members expect the economy to gain strength, albeit at a slower pace than originally estimated.  The central bank will maintain accommodative monetary policy until inflation is within their 2% to 3% target range, which they don’t expect to be until 2024.

At the Jackson Hole Symposium in August, Fed Chairman Powell noted that it is possible that the Fed will begin tapering by the end of the year.  However, he also noted that there is not a direct link between tapering bond purchase and raising interest rates. The Fed currently purchases $120 billion per month in Treasuries and MBS.  Chairmen Powell also noted that the goals have been met for inflation, however there still is “much ground to cover” in terms of employment.  After readings of +938,000 and +1,053,000 for June and July respectively, the print for August was only +235,000.  At next week’s FOMC meeting, markets will be looking for more hints that the Fed will begin tapering by the end of the year, although it is not expected that they will give specific dates nor pace of the reduction.   In addition, at July’s FOMC meeting, more than half the members said they expect a rate rise by the end of 2022.  Look to see if forecasts from next week’s meeting echo those sentiments.

Market participants see a 38.4% chance of a Fed rate hike in February 2023 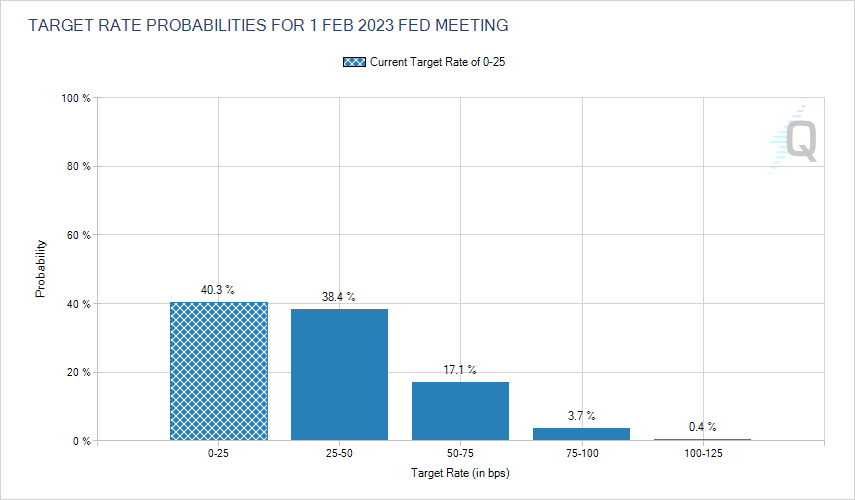 At the July Riksbank meeting, members left rates unchanged at 0.0% and said they will continue their asset purchase program of SEK 700 billion until it expires at the end of 2021. Current guidance from the Riksbank doesn’t show them raising interest rates until Q3, 2024.  However, earlier in the week, inflation surprised to the upside as CPIF (the Riksbank’s preferred measure of inflation) for August was 2.4% vs 1.9% expected and 1.7% in July.  This is the highest level since April 2021.  Some observers think officials may bring attention to this at their meeting next week.

At last week’s ECB meeting, members said they would purchase assets in the Pandemic Emergency Purchase Program (PEPP) at a “moderately lower pace” than during the last 6 months. They left the total amount of purchases under PEPP unchanged at 1.85 trillion Euros, and said the Program will expire in March 2022, as planned. Note that the ECB does not consider this “tapering”, as they have the flexibility to buy any amount of bonds at any time under the program, as long as the total amount is under 1.85 trillion Euros.  At the July meeting, the ECB changed their guidance regarding inflation from “close to, but below 2%” target to “a symmetrical 2%” target.  They also noted that they expect inflation to increase to 3%-year end, moderating to 2% in the medium-term.  The Eurozone’s flash August reading for CPI was 3%. Note that the ECB currently has interest rates set at -0.5%

Like other Asian countries, Japan has been hit hard recently by the coronavirus, with much of the country under State of Emergency for months.  However, as vaccination rates increase, the economy is expected to begin recovering.  Even with an economic recovery, Japan will still need accommodative monetary policy, as it has for the last two decades. Kuroda noted he is prepared to provide more stimulus if needed, reducing interest rates which are currently at -0.1%.  Kuroda said he expects inflation to rise to 1% in 2023.  The BOJ currently targets 0% for its 10-Year JGB yields.  With Prime Minister Suga resigning and new elections in October, the BOJ will likely remain on hold next week as they wait and see what new fiscal stimulus will be brought in by the new Prime Minister.

Everything you need to know about the BOJ

The Swiss Nation Bank is as dovish as they come.  They have had the world’s lowest interest rate of -0.75% since 2015, and with the coronavirus pandemic around for 1 ½ years, rates are unlikely to turn positive any time soon.  In addition, the central bank has increased their interventions in the foreign exchange market since the pandemic in order to keep the value of the Swiss Franc from appreciating.  At their last meeting, the SNB raised inflation forecasts for 2021 to 0.4% and 0.6% for 2022 and 2023.  When the central bank meets next week, don’t expect them to change their accommodative monetary policy by very much, if at all.

With many central bank meetings next week, there is always room for surprises which could affect foreign exchange rates.  Be on the lookout for results that are different from expectations and be ready for the possibility of volatility.  With the world beginning to gain control over the coronavirus pandemic, watch for central banks to continue to normalize monetary policy.