#UK - IRELAND#
HSBC, a global banking group, may be listed in Chinese government's Unreliable Entity List, aimed at foreign entities that engage in actions that endanger the country's national sovereignty, according to Chinese media Global Times.

G4S, a security services provider, released a 8-month trading update: "Following a strong performance in the first half of 2020, the Group’s revenues have remained resilient through the first eight months of the year.  Secure Solutions revenues, which account for 93% of Group revenues, were broadly in line with 2019. Group revenues were just 1.9% lower overall (...) As a result, the Group's underlying earnings which were in line with 2019 at the six months stage are now ahead of the prior year for the first eight months of 2020."

JD Wetherspoon, a pub company, was upgraded to "equalweight" from "underweight" at Morgan Stanley.


#GERMANY#
Merck KGaA, a chemicals and pharmaceuticals company, was upgraded to "buy" from "hold" at Deutsche Bank.


From a chartist point of view, the share remains supported by a rising trend line drawn since March. Moreover the stock has closed above its previous all-time high at 125.6E. The RSI has validated an upward breakout above 65.5.  Above the support area at 117E look for 133.5E and 140.5E in extension. 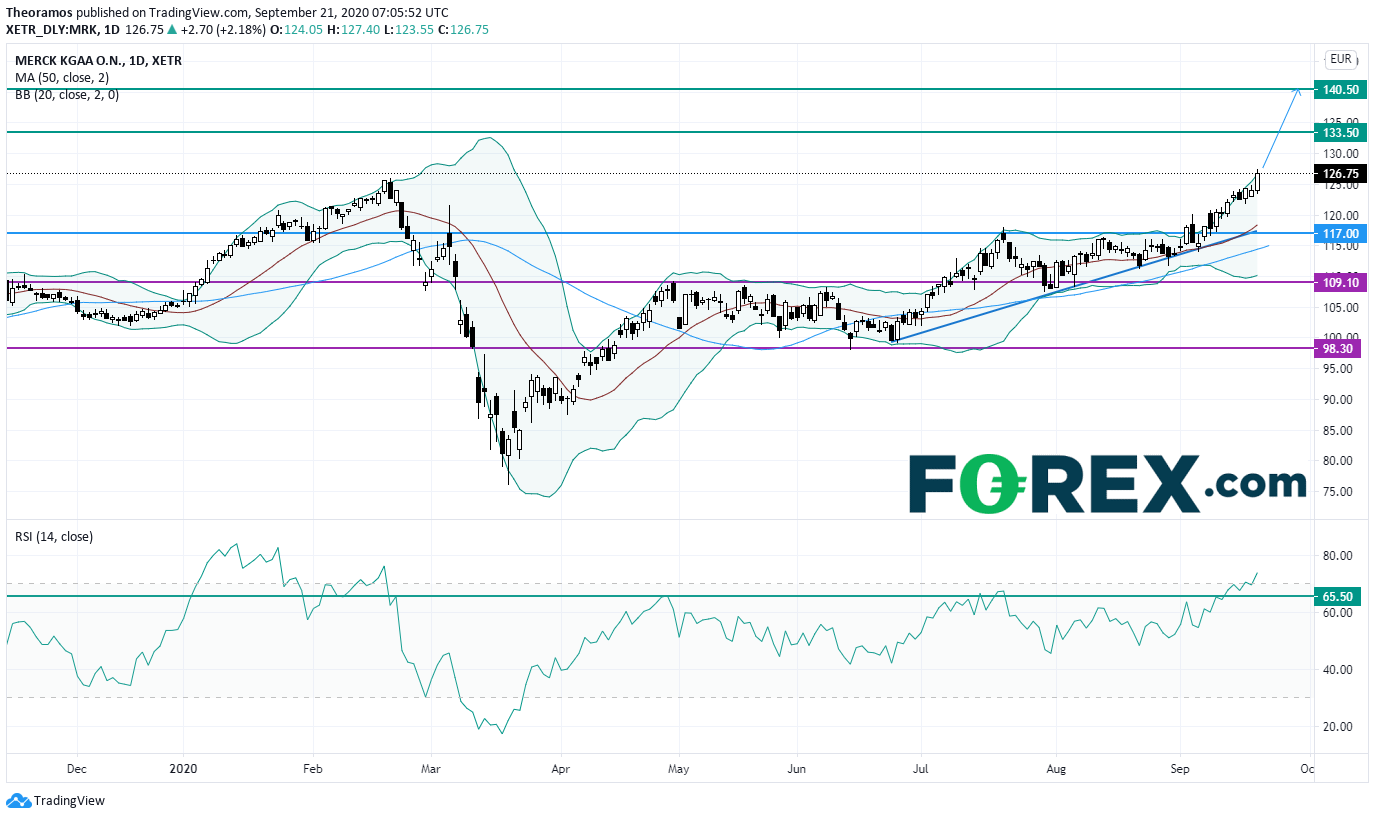 #FRANCE#
Iliad, a telecommunication services provider, announced that it will launch a public tender offer for the Polish telecom operator, Play, for a cash amount of 39 Polish zloty per share, representing 2.2 billion euros for 100% of the share capital and an enterprise value of 3.5 billion euros. The company added that it has signed a binding agreement to purchase a 40% controlling interest from Play's two reference shareholders for the same unit price, which will give the company the majority of seats on Play's Board of Directors.

LVMH, a luxury goods conglomerate, confirmed that it has submitted the proposed acquisition of Tiffany for antitrust review. The company said: "Eight of the ten requisite antitrust clearances have already been obtained. LVMH expects to receive approval from the European Commission and Taiwan well before the November 24, 2020 Outside Date."


#SWITZERLAND#
Novartis, a pharmaceutical group, said a phase 3 trial of spartalizumab (PDR001) with Tafinlar and Mekinist in advanced melanoma did not meet the primary endpoint.