EU indices up this morning | TA focus on Bunzl


#UK - IRELAND#
Bunzl, a distribution and outsourcing company, posted 1H results: "Revenue increased 6.7% (7.0% at actual exchange rates) to £4,846.3 million due to the benefit of acquisitions, a small positive impact from an additional trading day relative to the comparable period last year and underlying growth of 2.8%. (...) Adjusted profit before income tax was £306.8 million, an increase of 16.6%. (...) Adjusted earnings per share were 70.1p, up 16.4%. (...) As a result of the better than expected trading performance during the first half of the year and after due and careful consideration the Board has decided to reinstate and pay the final dividend for the year ended 31 December 2019 at the same level as originally proposed (35.8p). (...) The Board has also decided to increase the 2020 interim dividend by 1.9% to 15.8p."
From a technical point of view, the share price is supported by a rising trend line since March. The break above the previous top of December has unleashed a new upside potential Above 2163p look for the previous all-time high at 2588p and 3000p in extension. 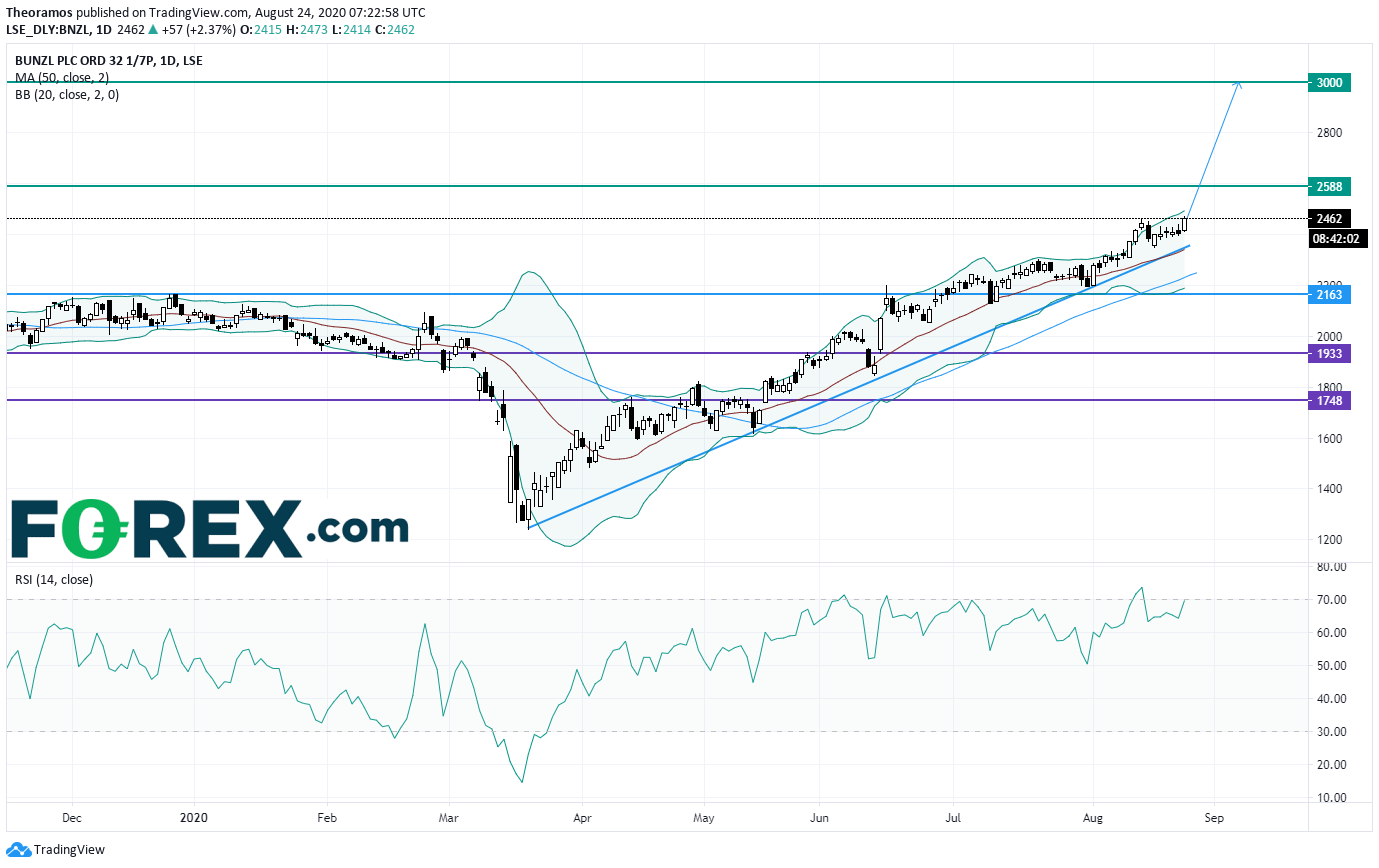 Pearson, a publishing and education company, announced that non-executive director Andy Bird will succeed John Fallon as CEO on October 19.

Balfour Beatty, an infrastructure group, said its 50:50 joint venture, Gammon, has been awarded a four-year 12.88 billion Hong Kong dollars contract for the expansion of Terminal 2 at Hong Kong International Airport, by the Airport Authority Hong Kong.


#GERMANY#
Metro, a wholesale chain, announced that CEO Olaf Koch will resign from his position by the end of 2020.


#FRANCE#
AXA, an insurance group, and Bharti announced that they have agreed to combine their non-life insurance operations in India, Bharti AXA General Insurance, into ICICI Lombard General Insurance. The company said: "Under the terms of the agreement, AXA and Bharti will receive a total of 35.8 million shares of ICICI Lombard on closing, which would represent Euro 521 million at current market value, (...) The transaction is expected to result in a one-time positive Net Income impact of approximately Euro 0.2 billion in AXA Group's FY 2021 consolidated financial statements."

Casino, a mass-market retail group, announced an additional disposal of 5% of Mercialys equity, which will generate 26 million euros proceeds and lower its stake in Mercialys in terms of voting rights from 25.3% to 20.3%.