The S&P 500 Futures remain bullish after they kept their upward momentum yesterday, as both the S&P 500 and the Nasdaq 100 charged to fresh record closes. Investors were encouraged by an emergency authorization on Sunday by President Donald Trump to use convalescent plasma to treat Covid-19 patients.

European indices remain in the green. The German Federal Statistical Office has reported final readings of 2Q GDP at -9.7% on quarter (vs -10.1% expected). Germany's August IFO Business Climate Index was released at 92.6 (vs 92.2 expected) and Expectations Index was published at 97.5 (vs 98.0 expected).

Asian indices closed in dispersed order as the Japanese Nikkei and the Australian ASX gained ground when the Hong Kong HSI and the Chinese CSI ended in the red. New Zealand Prime Minister Jacinda Ardern said Auckland's lockdown, which was re-imposed on August 12, will be extended by four days until August 30.

WTI Crude Oil futures are on the upside. 82% of oil output in the U.S. Gulf and more than a million barrels of refining capacity was shut down before the landing of Laura, which is forecast to become a hurricane. Later today, American Petroleum Institute (API) would release the change of U.S. oil stockpile data for August 21.

The US dollar edges lower as Asian currencies are benefiting from positive news on trade talks.


Salesforce.com (CRM), Amgen (AMGN) and Honeywell International (HON) will replace Exxon Mobil (XOM), Pfizer (PFE) and Raytheon Technologies (RTX) in the Dow Jones Industrial Average Index effective prior to the opening of trading on August 31, according to the S&P Dow Jones Indices. 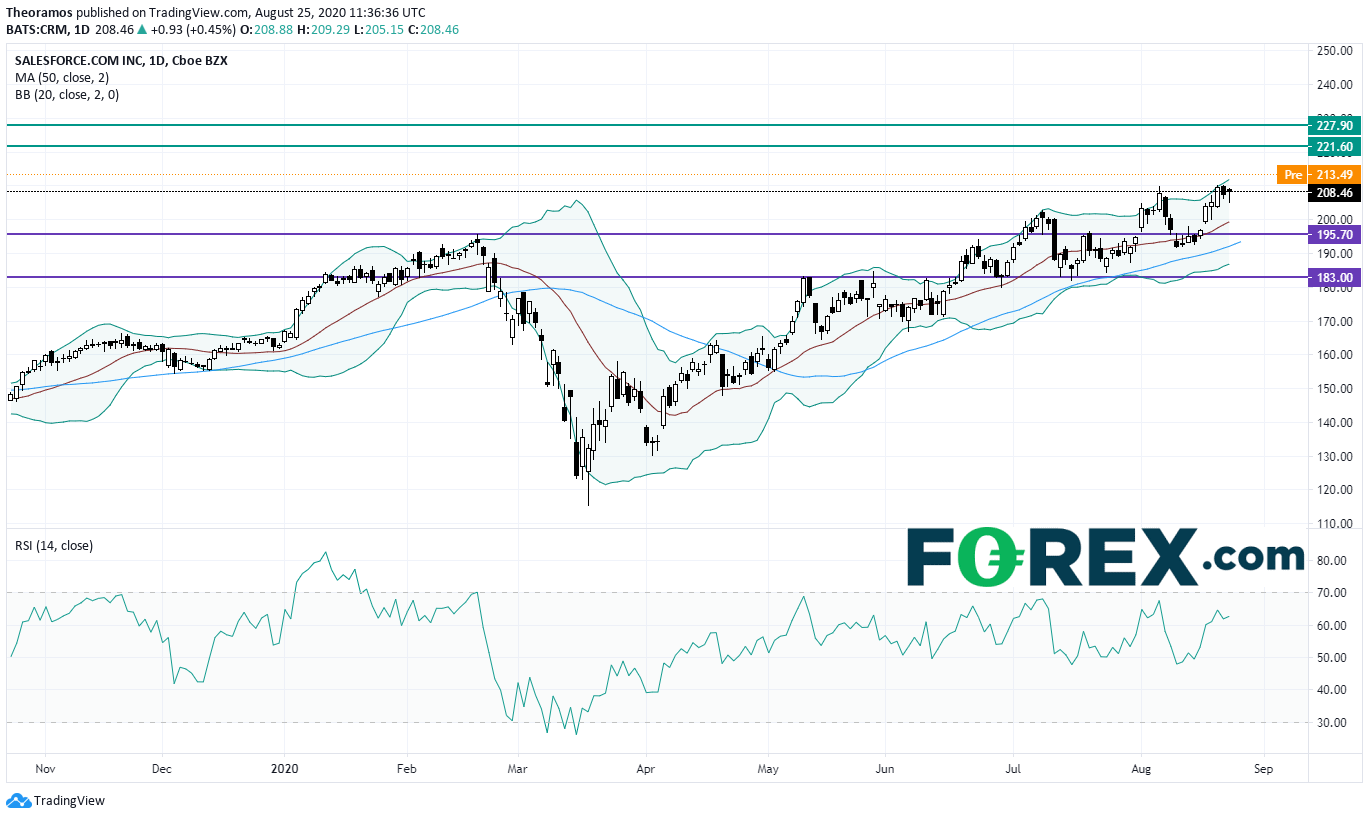 Apple (AAPL), the tech giant, plans to start to sell its products online in India next month, according to Bloomberg.

Medtronic (MDT), a developer and manufacturer of therapeutic medical devices, is gaining ground before hours after unveiling first quarter earnings that beat estimates.

Palo Alto Networks (PANW), a global cybersecurity leader, released fourth quarter adjusted EPS of 1.48 dollar, beating estimates, up from 1.47 dollar a year ago, on revenue of 950.4 million dollars, above forecasts, up from 805.8 million dollars a year earlier. The company also forecasts current quarter billings that were in line with current estimates, sending the shares down in extended trading.

Tiffany (TIF): according to Reuters, LVMH could extend the deal deadline to buy the jeweler by three months. The deadline was intially set to expire on August 24.

Gap (GPS), a retailer of apparel, was upgraded to "buy" from "neutral" at Citi.

Nio (NIO), the Chinese electric-vehicle maker, was upgraded to "neutral" from "sell" at UBS.