#UK - IRELAND#
WPP Group, an advertising and public relations company, released 1H results: "In the second quarter, like-for-like revenue less pass-through costs was down 15.1%, reflecting the impact of COVID-19 on economic activity. (...) Reported loss before tax was £2.6 billion, compared to a profit of £409 million in the prior period, reflecting principally the £2.7 billion of impairment charges and £57 million of restructuring and transformation costs. (...) Headline diluted earnings per share from continuing operations fell by 45.0% to 15.4p and was down 45.1% like-for-like. Reported diluted loss per share, on the same basis, was 214.5p, compared to earnings per share of 21.4p in the prior period. (...) For 2020, the Board is declaring an interim dividend of 10p."

Flutter Entertainment, a bookmaking holding company, posted 1H adjusted EPS rose 56% on year to 286.3p and adjusted EBITDA increased 31% to 684 million pounds on adjusted revenue of 2.39 billion pounds, up 21% (+22% at constant currency).
From a daily point of view, the share is supported by a rising trend line drawn since April. Moreover, the current upleg has been triggered by a recent bullish continuation pattern in rectangle. The 50DMA is playing a support role below the stock. Above 11500p look for a new all-time high at 12930p and 13735p in extension. 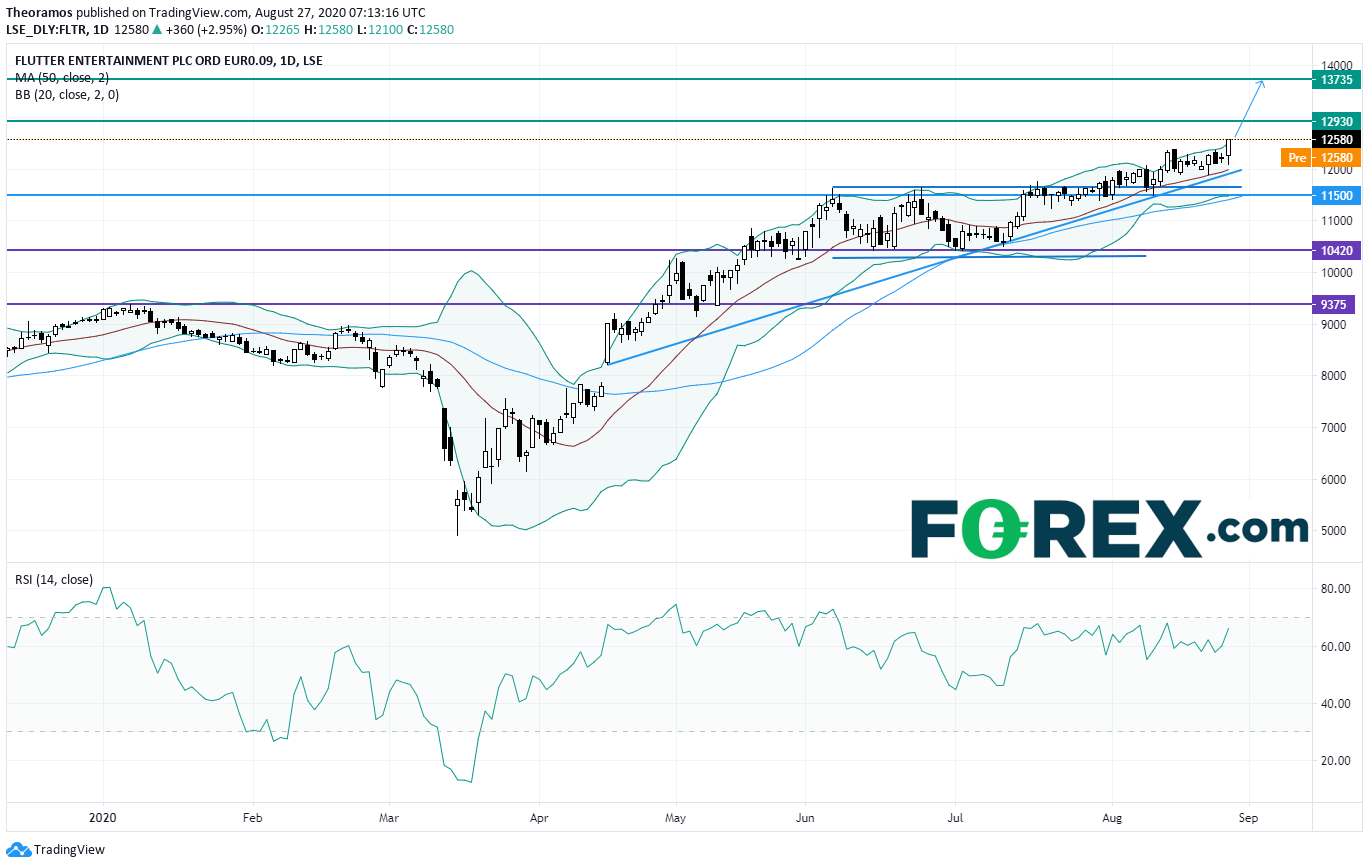 ITV, a media group, may be replaced by variety retailer B&M European Value Retail in the FTSE 100 Index, according to FTSE Russell. The index provider said: "The actual review of the FTSE UK Index Series will be conducted using data as at market close on Tuesday 1 September 2020. Confirmed rebalance changes will be announced after market close on Wednesday 2 September 2020."

Sage Group, an enterprise software company, announced that Sir Donald Brydon has indicated his intention to retire from his position as Chairman in September 2021.


#FRANCE#
Bouygues, an industrial group, reported that it swung to a 1H net loss of 244 million euros from a net profit of 225 million euros in the prior-year period and operating loss totaled 176 million euros, compared with an operating profit of 495 million euros previously. Revenue was down 15% on year to 14.76 billion euros. Regarding the outlook, the company stated: "The Group will return to significant profitability in the second half of 2020, without reaching the particularly high levels of second-half 2019."

Eiffage, a civil engineering construction company, said it swung to a 1H net loss of 8 million euros from a net profit of 290 million euros in the prior-year period and operating profit plunged 68.7% on year to 262 million euros on revenue of 6.9 billion euros, down 18.9% (-19.6% like-for-like). The company added: "For the year as a whole, Eiffage anticipates a marked decline in its business and results, which will however recover significantly in the second half of the year."


#BENELUX#
Ageas, an insurance group, said it has agreed with China Taiping Insurance to acquire 25% of its wholly controlled subsidiary Taiping Reinsurance's enlarged share capital for a total consideration of 3.1 billion Hong Kong dollars, or around 340 million euros.