6 reasons Crude Oil is lighting it up; USD/HUF along for the ride

After days of bullish news for Crude, WTI oil moved higher on 4 of the last 5 trading days. Let’s look at some of the bullish factors that are helping to push oil higher, starting from March 17th:

As a result, of these headlines and stories,  WTI Crude oil has been moving higher. Crude had been moving higher since the spring of 2020 in an orderly fashion.  However, on February 28th, price exploded higher as Russia invaded Ukraine, reaching a high of 129.42 on March 8th.  Price then pulled back to support on March 15th near 93.56.  Since then, Crude has been moving aggressively higher once again due to the factors mentioned above.  Today price stalled at 115.37, just below resistance at the 61.8% Fibonacci retracement level from the highs of March 8th to the lows of March 15th at 115.70.  Above there is horizontal resistance at 117.17, ahead of the recent highs at 129.42. Support is at Tuesday’s low of 107.12, then horizontal support at 103.82. 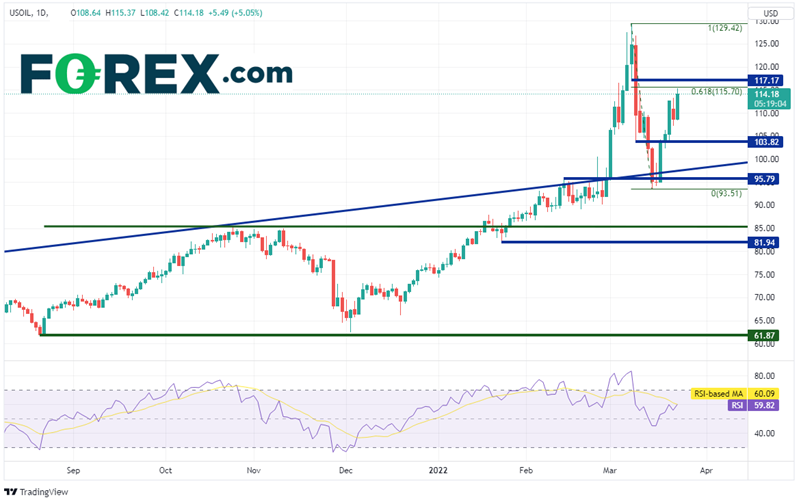 The National Bank of Hungary increased interest rates by 100bps to 4.4% on Tuesday, the largest rate hike since 2008, as high oil costs and worries about the war have increased inflation.  However, it had little effect on the Hungarian Forint.  USD/HUF has a high positive correlation with Crude oil.  This has been driving the direction of the pair over the last month.  The current correlation coefficient between WTI Crude Oil and USD/HUF is +0.85.  Any readings above +0.80 are considered strong correlations.  When Russia invaded Ukraine, USD/HUF moved higher with Crude oil.  Both made tops on March 7th, with USD/HUF making a high of 368.058. Both pulled back to support, with USD/HUF making a near-term low of 333.41 on March 17th.  However, since then, as Crude rallied to the 61.8% Fibonacci retracement level, USD/HUF got stuck at horizontal and trendline resistance.  Correlation measures how often the 2 assets move in the same direction, not the magnitude of the move. 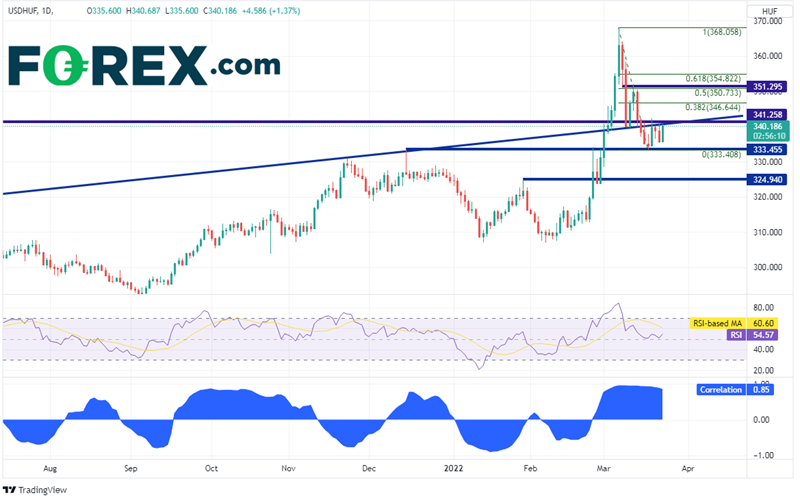 Crude oil has been on fire lately.  There is a strong positive correlation between the direction of WTI Crude Oil and USD/HUF, which means they move together in the same direction but not necessarily the same magnitude.  Nevertheless, if Crude oil continues to move higher, so should USD/HUF.  However, if the resistance holds in Crude Oil, USD/HUF could be down at new near-term lows in a hurry!