A50 Index (Short term): Focus on the Declining Trend Line

The A50 Index has rebounded around 13% from the March on the hope of economic recovery after the COVID-19 outbreak....

The A50 Index has rebounded around 13% from the March on the hope of economic recovery after the COVID-19 outbreak.

Last week, China's CPI grew 3.3% on year in April, worse than the expectation of the increase of 3.7%, compared with the growth of4.3% in March, according to the government. In the below chart, the growth of CPI is slower since February, but has not reversed up.

On a daily chart, the index prices remain capped by a declining trend line drawn from January top, indicating a bearish outlook. However, the index stays above both rising 20-day and 50-days moving averages, which suggests a positive bias. As the technical views are mixed, it is better to stay at neutral bias.

On the upside, only a break above 13720 (the high of May 11) would validate a bullish breakout of declining trend line and call for a rise to the resistance level at 14250 (the high of March).

On the downside, a break below the previous low at 12800 would violate the higher tops and higher bottoms pattern and bring a return to 12390 (the low of April). 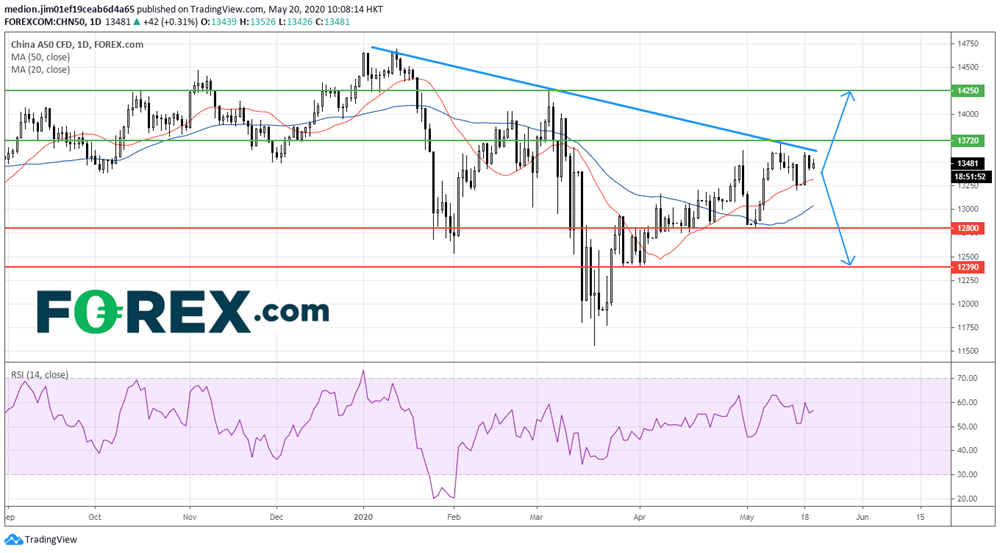