Airbnb: Why Now May Be the PERFECT Time for a Travel Company to IPO

After more than five years of speculation and anticipation, US home rental company Airbnb (ABNB) is finally poised to go public, likely on 10 December, as the final mega-IPO of the year (though the DoorDash IPO will also command investors’ attention ahead of the holidays).

Needless to say, a travel-dependent company going public in the midst of a global pandemic isn’t optimal timing, but investors appear to be looking past the current headwinds to a bright future for the firm. According to Airbnb’s IPO prospectus, the firm saw Q2 revenue fall -72%, forcing the company to lay off 25% of its workforce and take on nearly $2B in high-interest debt; Sales fell “only” -18% to $1.3B in Q3, and the firm was able to post a profit of $219M after cutting costs earlier in the year.

While travel has been upended in ways no one could predict, Airbnb has been able to recover faster than many of its more traditional peers as travelers seek out quieter, more private destinations and longer stays. Coming into 2020, Airbnb was valued at around $35B in the private markets before dropping as low as $18B in April, but based on recent headlines, the firm is targeting a valuation range back in the $30-33B range. In other words, as with the broader markets, Airbnb’s investors are looking past the current rough patch toward a "return to normal" in H2 2021, perhaps with particular pent-up demand for travel.

One factor supporting ABNB’s valuation has been the staggering rally in recent IPOs more generally. Some readers are no doubt familiar with the big moves in Snowflake, Inc (SNOW) and Palantir Technologies (PLTR), but the excitement around IPOs has been broad and widespread over the last eight months. For example, the Renaissance IPO ETF (IPO) - featuring top holdings such as Moderna (MRNA), Uber Technologies (UBER), Zoom Video (ZM), and Pinterest (PINS) – has more than tripled off its mid-March low: 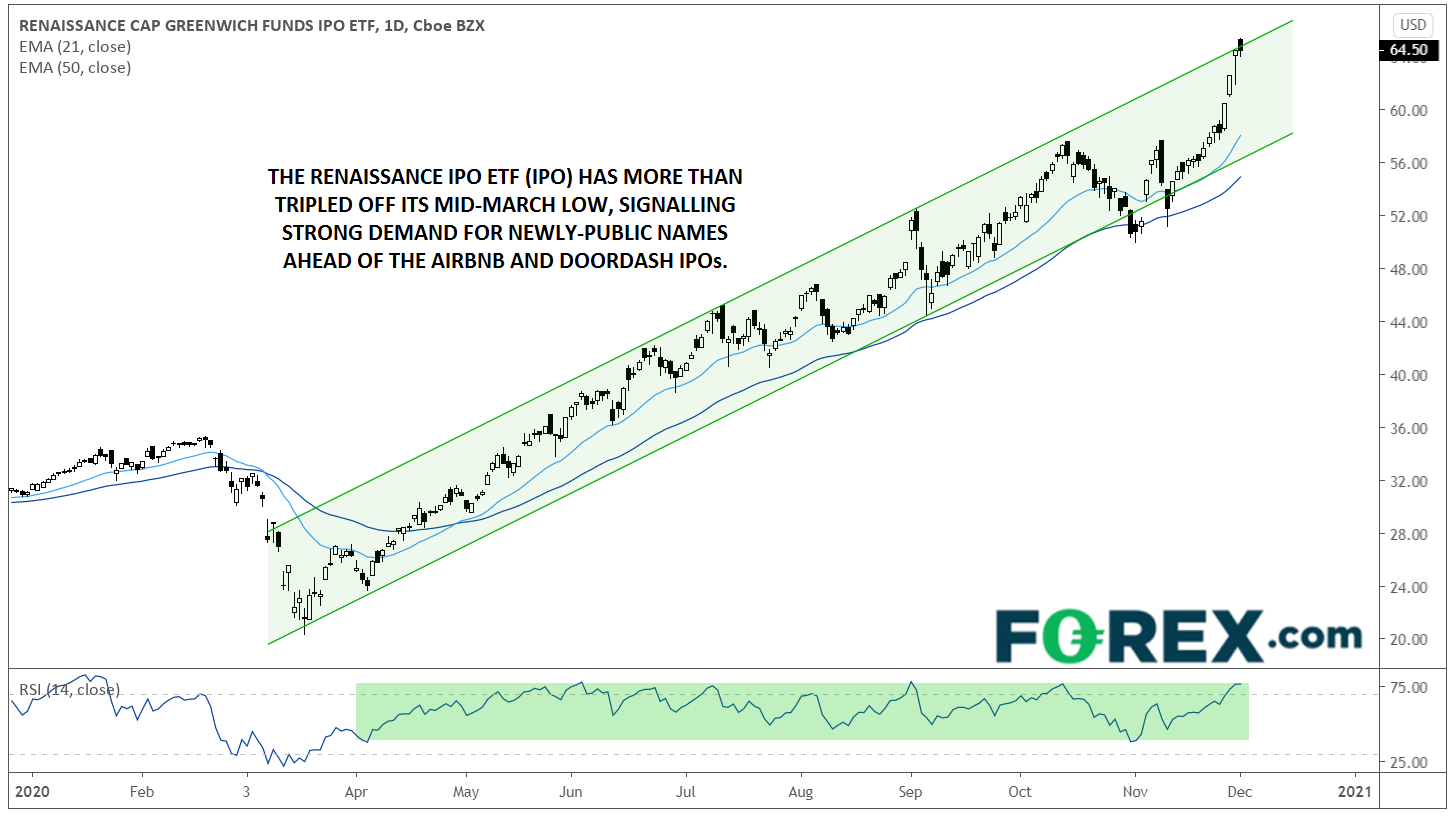 With broad indices testing all-time highs and traders willing to look past a long winter to a “spring thaw” in economic activity, the ABNB IPO could well follow in the footsteps of other successful IPOs over the last two years when it hits traders’ screens next week.