Reports that another huge spending bill from the Biden administration is on the way, whilst yields stopped moving higher helped to support Wall Street overnight.

The Biden administration are reported to be working on a $3 trillion spending bill to be unveiled next week. $1 trillion of this is to be spent on infrastructure, and the remainder to be allocated for what Democrats call “human infrastructure” (students, workers, or those side-lined on the job market). Taken alongside the latest COVID-19 bill brings it to just under $5 trillion in spending. Not bad for two months in office, although someone will have to pay for this no doubt… Regardless, Wall Street likes it.

Technology stocks were the strongest performers overnight with the Nasdaq 100 rising 1.7%. It now sits about midway between 12,755 support and 13,300 resistance, although the potential for an inverted head and shoulders pattern is now developing.

It was slightly mixed in Europe with the CAC and DAX diverging. The CAC extended its losses to a 9-day low and fell -0.5% whilst the DAX held above its 10-day eMA and rose 0.5%. The STOXX 50 tracked the DAX higher with a 0.2% gain.

The ASX 200 is another range-bound market which requires a catalyst to develop a trend. Buyers keep stepping in around 6660/80 yet momentum wanes if or when it reaches 6850. As it trades around the lower third of that range then perhaps the near-term bias could be up today, should it choose to take Wall Street’s lead.

The US dollar index (DXY) one again failed to hold above 92.03 resistance yesterday and closed with a bearish pinbar back inside the 91.30 – 92.03 range. This appears to be the theme for a few major pairs, so traders may need to lower their timeframes and expectations of volatility until we see clear breakouts across multiple markets which allow trends to develop.

The Swiss franc and euro were the strongest majors, whilst the Canadian dollar and US dollar were the weakest. CHF/JPY was the most volatile, initially trading -0.53% lower to recover and trade around 0.6% higher for the session. CAD/CHF was the most bearish with a -0.7% decline.

AUD/USD remains rangebound and found buyers around 0.7705 support, yet remains trapped between the 50-day and 20-day eMA. We’d need to see a break above 0.7850 for a bullish breakout of its range.

AUD/JPY produced a bullish pinbar on the daily chart which respected the 20-day eMA. As tempting as it looks for another leg higher, take note that it already struggled to break above 85.00 last week (February high) which makes the reward to risk ratio on the small side around current levels.

EUR/NZD has closed above the bearish trendline outlined in yesterday’s Asian open report. We would like to see a break above the 1.6665 high before assuming the counter-trend move (or potential trend reversal) is underway.

Bears have so far failed to break the rising trendline support level twice since printing a low in January. Perhaps they will have better luck on their third attempt, especially if UK data misses expectations in today’s data dump. 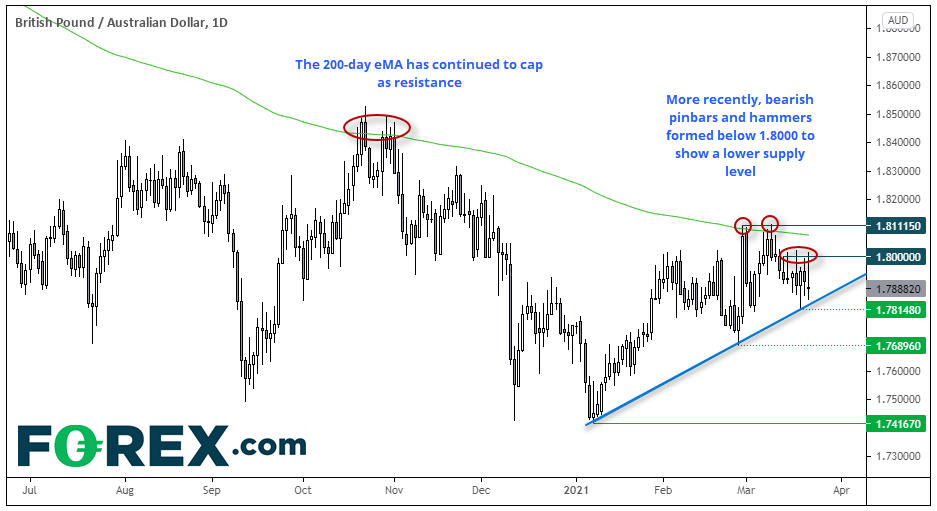 The daily chart has been oscillating lower overall, but the 200-day eMA has capped as resistance throughout. A series of bearish pinbars and hammers failed to break 1.8000 over the past two weeks to show supply in this area, so now we wait to see if prices can break lower.

Commodities: (Still) waiting for gold and WTI to falter

WTI continues to trade along the inside of the broken trendline it closed beneath on Thursday. The bias remains bearish below 63.13.

Silver closed to a 10-day low and is bac beneath $26 which brings recent lows around $25 into focus. Price action remains choppy at best though and is likely waiting for gold to decide which way it will break before following suit.

As for gold, it was a bearish outside day which closed back beneath 1740 and failed to test 1755 swing high, so our bias remains for an eventual dip lower. Patience is a be a virtue. We’d explore bullish setups with a break above 1764 but, until then, we await bearish momentum to return and take it close to 1700.

Palladium continues to correct from recent highs, having rallied over 11% last week and breaking key resistance at 2514. A potential bullish hammer formed on the daily chart but volatility is still on the high side, so we will continue to monitor its potential for a swing low to form. 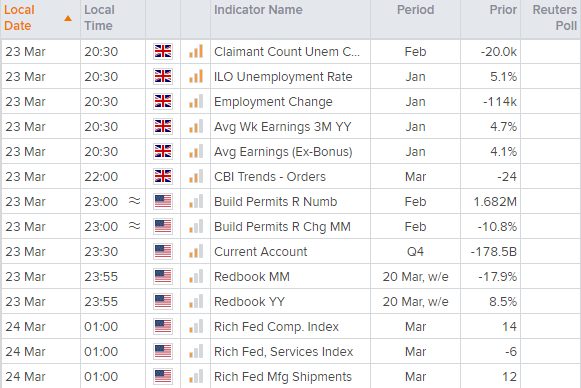 
It’s super quiet in the calendar during the Asian session. So we’ll need to wait until UK data hits at 20:30 AEDT for any calendar driven moves. Read Joe Perry’s UK data dump preview. And data in the US is second tier at best, so without another catalyst we could be in for smaller ranges.