The consensus view is for growth to have slowed in China’s GDP report today, leaving some to speculate that more stimulus could follow. 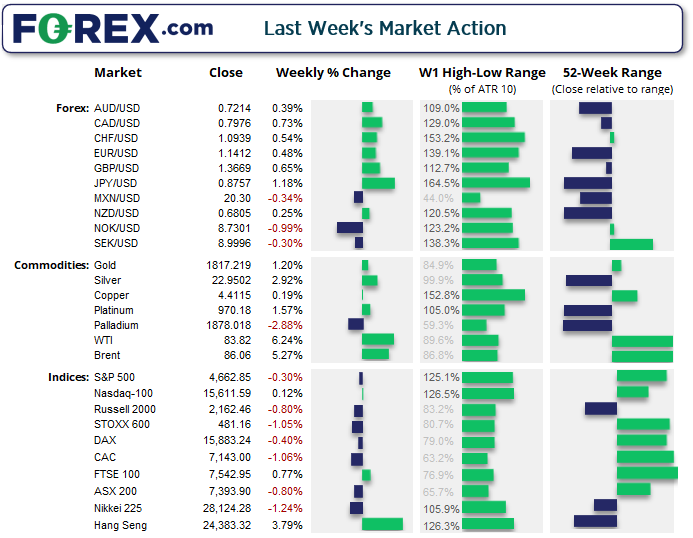 Wall Street was mixed amidst weak data and earnings

Retail sales fell -1.9% in December, which was its weakest print in 10-months as shoppers appear to have taken the advice to bring their purchases forward. Consumer sentiment was also lower according to the University of Michigan Consumer Sentiment survey. At 68.8 it sits just above its 10-year low seen in November. And perhaps not so surprisingly, inflation expectations also rose. The S&P 500 recouped earlier losses to close just 0.8% higher whilst the Dow fell -0.56%. The Nasdaq 100 closed 0.75% higher after opening at the low of the day, yet in comparison to Thursday’s sell-off it was a minor victory at best.

Each time it looked as though the ASX 200 could finally challenge 7500, bears return to drive it lower. It should be noted that the more volatile days are bearish and prices are now probing trend support, and we are on guard for a bearish break of it.

China release GDP data at 13:00 AEDT, and Q3 growth is expected to fall to 3.3% from 4.9% previously. And this makes sense as PMI contracted a couple of months ago, and retail sales and investments fell much further than expected last month. And, as inflation was also underwhelming in last week’s report, it begs the question as to whether Beijing will be prompted to provide more stimulus. Therefore, if GDP comes in below expectations we could even see Chinese equity markets rally if stimulus is deemed to be on the horizon.

The China A50 closed below 15,200 for a second consecutive day although momentum is waning. A stronger than expected GDP report could helped it recover back above 15,200 (or even a weaker than expected), but we’d expect it to remain below 15,200 if GDP comes in around 3.3%.

USD pared some of its week’s losses on Friday

Expectations for the Fed to hike more aggressively helped the US catch a bid and snap a 3-day losing streak and rally from the September highs. That said, the US dollar was still the weakest major currency last week but it’s possible we have seen a corrective low. We also suspect the euro has seen its corrective high having found resistance below the 1.15 handle and November lows.

The Australian dollar was the weakest currency on Friday and closed lower against all of its peers. AUD/CAD closed back below the March 2020 high which has invalidated our near-term bullish bias. AUD/JPY fell to a 3-week low and GBP/AUD closed at its highest level since August. AUD/USD fell over -1% and below its 20-day eMA, but a potential setup that has caught our eye is on AUD/CHF.

Momentum shift at resistance on AUD/CHF 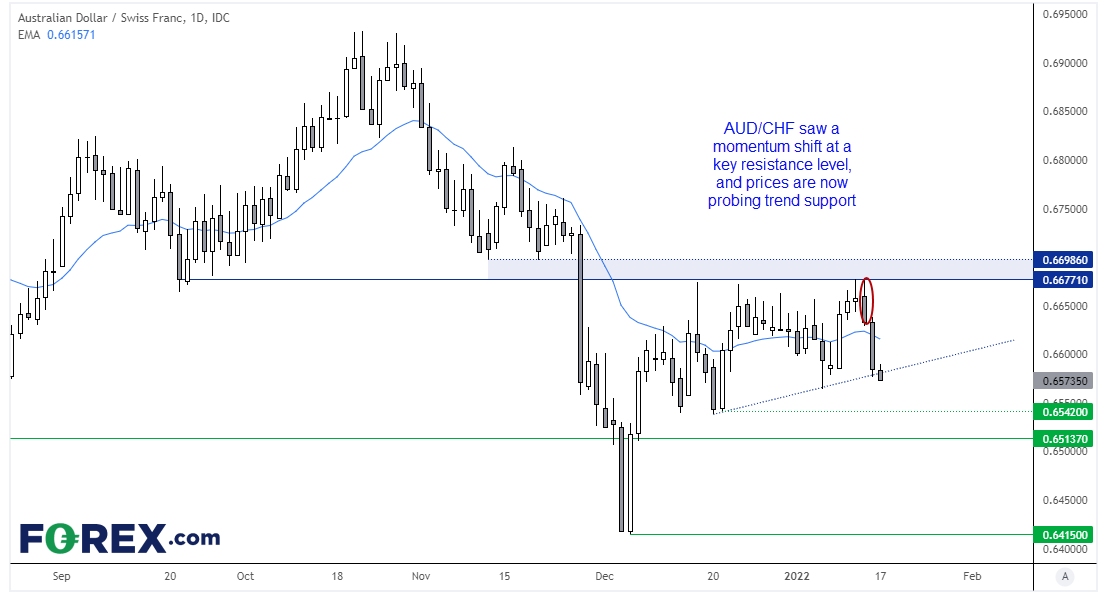 Since the middle of December, AUD/CHF saw several failed attempts to break 0.6677 resistance, before Thursday’s bearish engulfing candle and Friday’s bearish range expansion confirmed a momentum shift at resistance. Prices respected trend support but we favour a downside break of it due to the strength of momentum. Traders can wait for a break of trend support with an initial target around the 0.6540 low.

Gold’s rally has stalled just below the December high which was marked with a large bearish engulfing candle. With two bearish candles forming at this cycle high we suspect it could enter a retracement phase whilst prices remain below 1830, but we’d also need to see a break above 1834 before becoming convinced that its next upleg will be sustained. And with real yields (TIPS) rising it further suggests gold may need to pull back. 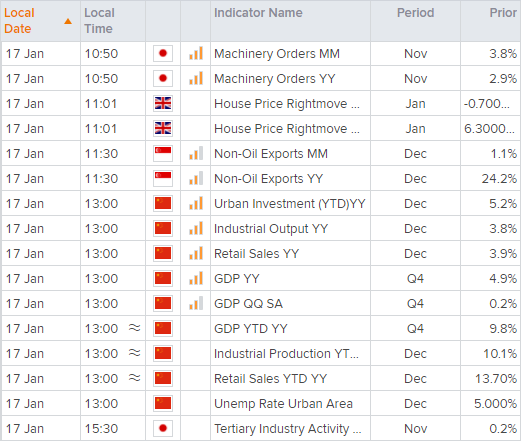