The ability for indices to remain elevated post hot-CPI was short-lived, with US markets taking a dip following higher employment claims data.

With Omicron ripping through the US then perhaps higher employment claims should not come as too much of a surprise. But with the data pointing to fresh layoffs and US banks up today for US earnings season investors appeared a little twitchy.

Jobless claims rose for a second consecutive week, by 23k which takes the toll to an eight-week high of 230k. Yet continuous employment claims fell to a new post-pandemic low of 1.56 million, which indicates that fresh layoffs have been the driver behind the data. Producer prices were mixed core PPI rising to 9.3% y/y from 7.7% prior, with the broader PPR falling slightly to 9.7% y/y from 9.8%. ON the month, both reads fell with Core PPI down to 0.5% m/m from 0.7% and PPI down to 0.2% from 0.8% prior.

Tech stocks led the way lower with the Nasdaq 100 falling over -2%, the Dow fell around -1.2% and the DJI was down around -0.4%. All major benchmarks printed bearish engulfing days with the Nasdaq’s being the most prominent.

ASX bulls have 7500 within sight 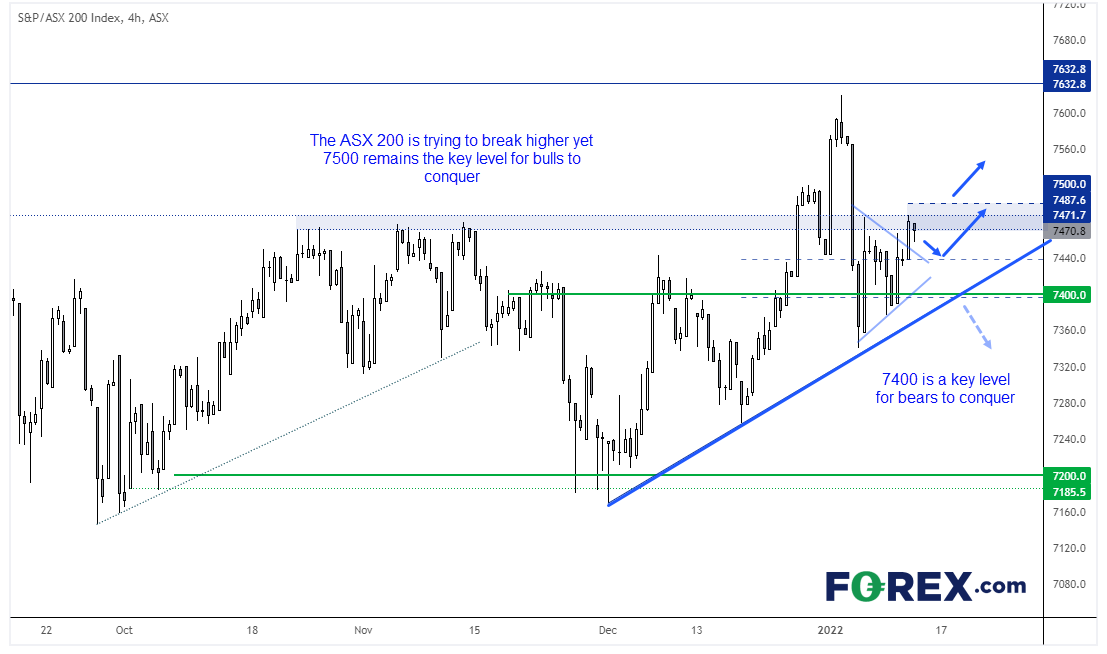 This year the ASX 200’s range has spanned 3.8%, yet it trades just 0.4% higher after some volatile whipsaws. But it is trying to break higher from a symmetrical triangle on the four-hour chart, yet it is up in the air as to whether it has the clout to break above 7500. Given the weak lead from Wall Street then it’s possible we could see it dip lower once more, in which case we would look for evidence of support around 7440 to build and consider dips, en route to 7500. Otherwise we will wait for a break above 7500 to suggest bullish trend continuation, or for a break below 7400 to signal a break of trendline and beginning of a bearish move.

The Fed’s Brainard was the latest senior official to tip their hat to a March hike as Fed members play along with their scripts. Yet the US dollar was the weakest currency alongside the Australian dollar, both of which were broadly lower against their peers. The Japanese yen and Swiss franc were the strongest currency majors during risk-off trade.

USD/JPY fell to a 3-week low and probed the December trendline and 114 handle. However, we note that RSI (2) is very oversold at 2.9 so we urge caution at these lows over the near-term. Take note a recent survey revealed a majority of business said that further fiscal stimulus is required, with some noting the strong yen is a concern. USD/CHF fell to a 5-week low and took a dip below 0.9100 before recouping around a third of the day’s losses. The Australian dollar was also broadly lower. UD/USD formed a bearish pinbar on the daily chart after failing to hold above 0.7300. A bearish engulfing candle formed on AUD/JPY and AUD/CHF to underscore the tone of risk-off.

In November the BOK raised rates for a second time in this cycle to 1% to fend off rising household debt and consumer prices. In December their most dovish board member dissented and called for a hike (which is hawkish). And as they were the firt central bank to raise rates (even ahead of RBNZ) and against the backdrop of a hawkish Fed we are on guard for a potential hike today, even if it is not a consensus view. USD/KRW trades around 1187.65 after a 4-day pullback from its 18-month high, so a surprise hike could potentially help it form a swing low.

China’s trade data is expected to show that export softened to 20% y/y in December from 22% in November, whilst imports also softened due to the rise of Omicron ahead of Christmas. If true it denotes softer demand both domestically and from overseas. With AUD printing a bearish pinbar following an extended run above 73c then perhaps we’ll see some bearish follow through should data come in soft today. Meanwhile, the China A50 is on the ropes following its bearish engulfing candle which closed below 15,200 yesterday. This invalidates our original bias outlined earlier this week, and we’ll flip to a bearish bias with a break of yesterday’s low. 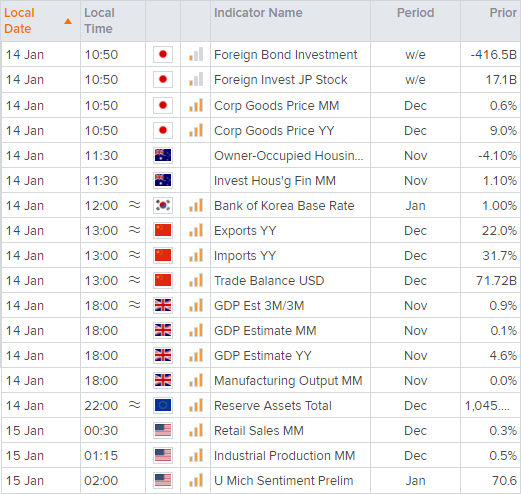