<p>All is quiet on the Western front with US traders out of the office on the annual Martin Luther King bank holiday. Markets are predictably subdued amidst the lower liquidity conditions, with most risk assets seeing oversold bounces or at least consolidating after getting massacred the first two days of the week.</p>

All is quiet on the Western front with US traders out of the office on the annual Martin Luther King bank holiday. Markets are predictably subdued amidst the lower liquidity conditions, with most risk assets seeing oversold bounces or at least consolidating after getting massacred the first two days of the week.

One currency pair that has proverbially "took one on the chin" so far this year is AUD/USD. After starting the year up around .7300, the Aussie has fallen by over 400 pips to hit a fresh nearly 7-year low  under the .6900 handle. Despite efforts to diversify its sources of growth, Australia’s economy remains heavily dependent on China and with fears about the world’s second-largest economy running high, traders have chosen to sell AUD/USD first and ask questions later.

On a technical basis, rates have carved out a clear double top pattern near .7375 over the last three months. The height of the double top pattern measured down to its "neckline" at .7015 is about 360 pips, so the measure move target of the pattern comes in all the way down at .6650.

Though of course there’s no guarantee that prices will necessarily fall another 200+ pips from here, the secondary indicators are also painting a bearish picture: the MACD is trending sharply lower below both its signal line and the "0" level, whereas the RSI remains subdued (though a further bounce from the nearly-oversold levels is a definite possibility this week).

As of writing, today’s bounce has taken AUD/USD up to test key previous-support-turned-resistance at .6900, a level that has capped rates so far today. Looking ahead, tonight’s Chinese GDP figure (along with the accompanying data on Industrial Production, Fixed Asset Investment, and Retail Sales) could set the tone for the rest of the week; recent comments from Chinese Premier Li indicate that the Chinese economy grew at a 7% rate in 2015, and with all the jitters surrounding Chinese markets thus far, some analysts believe that the Chinese government will make sure that the figures help to settle traders’ sentiment, come hell or high water.

Even if AUD/USD sees a more substantial bounce this week, the medium-term bias will remain to the downside as long as sellers keep the unit pinned below the double top neckline near the .7000 handle. Meanwhile, a disappointing slew of Chinese economic data could reinvigorate the AUD/USD downtrend for a potential move toward the double top target at .6650 later this month. 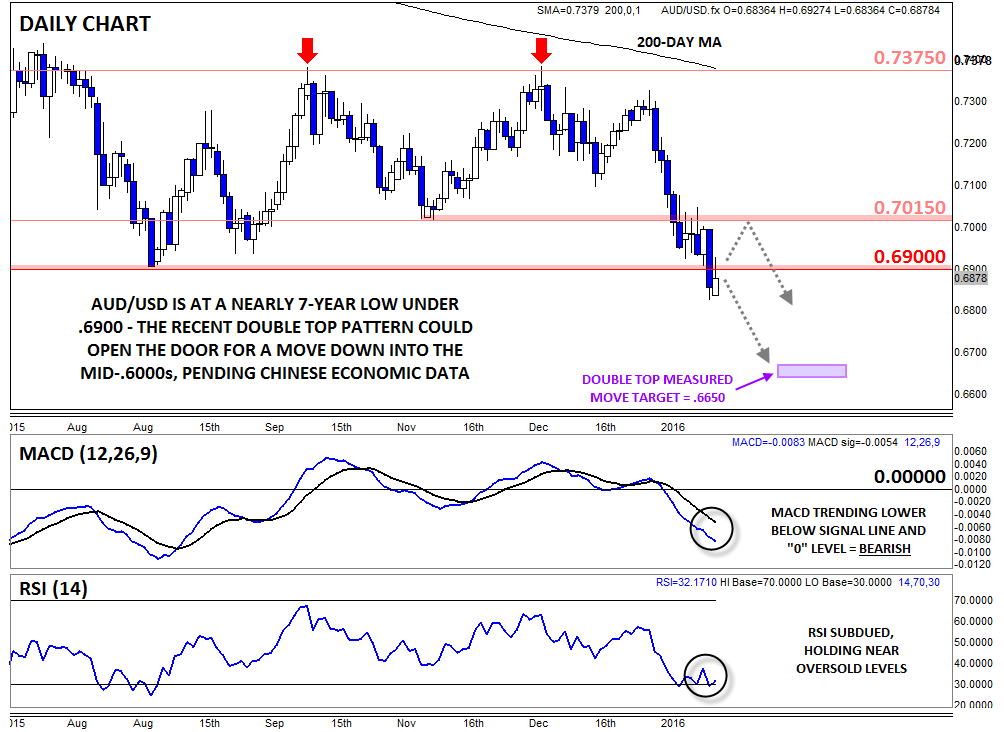