<p>AUD/USD has been falling in a sharp downtrend for the past month from its late April high above 0.7800. The initial drop was accelerated after a surprisingly low Australian inflation (CPI) reading was released near the end of April and then was followed up in early May by a Reserve Bank of Australia interest rate cut to a record low 1.75%. Subsequently, the central bank lowered inflation forecasts and hinted at further potential rate cuts.</p>

AUD/USD has been falling in a sharp downtrend for the past month from its late April high above 0.7800. The initial drop was accelerated after a surprisingly low Australian inflation (CPI) reading was released near the end of April and then was followed up in early May by a Reserve Bank of Australia interest rate cut to a record low 1.75%. Subsequently, the central bank lowered inflation forecasts and hinted at further potential rate cuts.

With these factors affecting both the Australian and US dollars in recent weeks, there should be little surprise that the AUD/USD has been in such a sharp slide this month. Since early May, this slide has led to strong breakdowns below major support levels, including: the 50-day moving average, an uptrend channel extending back to January’s multi-year lows near 0.6800, the key 0.7500 and 0.7350 support levels, and most recently, the 200-day moving average. The latest culmination of this precipitous decline has seen AUD/USD reach down to hit its key downside support target at 0.7200, around which the currency pair has fluctuated for the past week.

Looking ahead, the persistent contrast between an increasingly dovish Reserve Bank of Australia and a seemingly more hawkish Federal Reserve is likely to lead to a continuation of both the short-term and long-term downtrends for AUD/USD. Key risk events on the US side will be presented on Friday, when US GDP data will be released and Fed Chair Janet Yellen will be making a speech. With any further US dollar strengthening in the event of better-than-expected GDP data and/or a hawkish Yellen speech, a decisive breakdown below 0.7200 could occur, in which case the next major downside target is at the 0.7000 psychological support level. 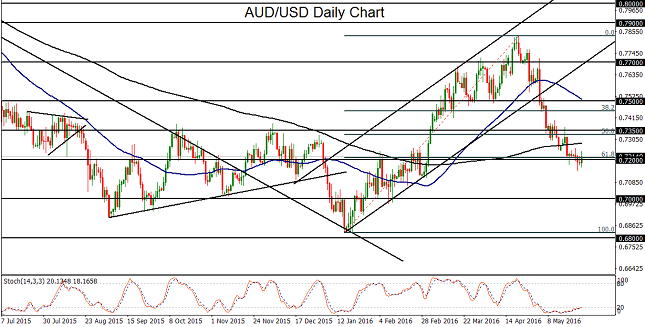