AUD/USD struggles to break out above key consolidation pattern

AUD/USD made a tentative breakout above a small, inverted head-and-shoulders pattern on Wednesday, but pared most of its gains by the afternoon. During the Asian session early Wednesday, Australia released its Consumer Price Index (CPI) inflation reading that showed a greater-than-expected increase in consumer prices, prompting AUD/USD to rise to a three-week high.

After the currency pair’s early Wednesday surge, however, it gave back much of its gains in the afternoon when the US FOMC statement was released.

The bullish head-and-shoulders pattern that has been forming since the beginning of the year had given AUD/USD bulls cause for some optimism that a bottom may have been forming for the embattled currency pair as it consolidated near recent multi-year lows. Less than two weeks ago in mid-January, AUD/USD dropped to more than a six-year low at 0.6825, just above its 0.6800 downside support target, forming the "head" of the chart pattern.

Despite the late retreat from its highs on Wednesday, AUD/USD could still potentially complete the bullish head-and-shoulders pattern, especially with the Reserve Bank of Australia’s (RBA) rate statement scheduled to be released on Tuesday of next week. With the slightly higher inflation readings in Australia that may reduce the chances of a near-future interest rate cut, the RBA may strike a more hawkish tone that could boost the Australian dollar further from its long-term lows.

In the event of a sustained breakout above the inverted head-and-shoulders pattern, the first major upside target is around the 0.7200 resistance level. Of course, the chart pattern would be invalidated on any return back down towards the key bearish trend target at the noted 0.6800 support level, in which case a continuation of the longstanding downtrend will have been confirmed. 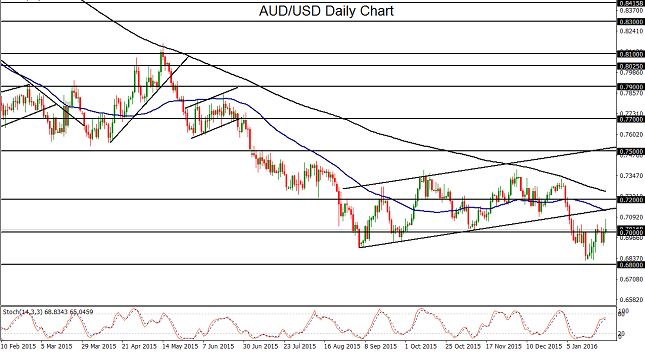