AUD/CAD in focus ahead of RBA and BOC

The Canadian dollar has been the worst performer among the major currencies today, continuing its recent poor run of form.

The Canadian dollar has been the worst performer among the major currencies today, continuing its recent poor run of form. The Loonie has been undermined amid concerns over planned US tariffs on steel and aluminium, while uncertainty remains over the latest rounds of NAFTA negotiations. Canada is the largest exporter of these metals to the US, so the prospects of tariffs could really hurt their economy.

Canada is facing additional problem of the US being its major oil exporting destination. The US is slowly becoming self-sufficient in its energy needs, so it relies less on energy imports. And with the US increasingly turning towards protectionism, this is bad news for Canadian exports. The Bank of Canada is likely to echo those concerns on Wednesday and is highly likely to abandon its hawkish stance after raising interest rates a few times since the summer of last year.

Another central bank meeting ahead of the BOC is the Reserve Bank of Australia tonight.  The RBA is unlikely to alter interest rates and we are not expecting to see any significant change in the bank’s rhetoric from last month. But there may be some surprisingly hawkish or dovish comments from the RBA which may cause the Aussie to move sharply. However any RBA-related moves are likely to be short-lived, in our view.

If that’s the case and with the BOC rate decision coming up later on in the week, the AUD/CAD may be able to maintain its bullish bias for the time being. If the RBA triggers a short-term pullback in the Aussie, then the AUD/CAD may come back for a rounded-retest of the broken 1.1000/1.1010 level. Previously this was a strong resistance level, so what we are anticipating now is a bounce here. Depending on the impact of the RBA, the potential bounce from here could be significant. However if the RBA turns out to be significantly dovish then the potential bounce could be short-lived. So conservative traders may wish to either book something at the next trouble area or wait for confirmation before pulling the trigger. An alternative scenario would be if the Aussie rallies on the back of the RBA’s decision. In this case, the AUD/CAD may not come back to test 1.1010, at least until the BOC’s decision.

However if the abovementioned  1.1010s support fails to hold this week, then one will have to consider the bearish scenario, especially if the next support levels at 0.9985 and 0.9970 also give way. For us, though, the breakout can only be considered a fakeout if and when the AUD/CAD drops below 0.9915 – the most recent low prior to the latest rally. 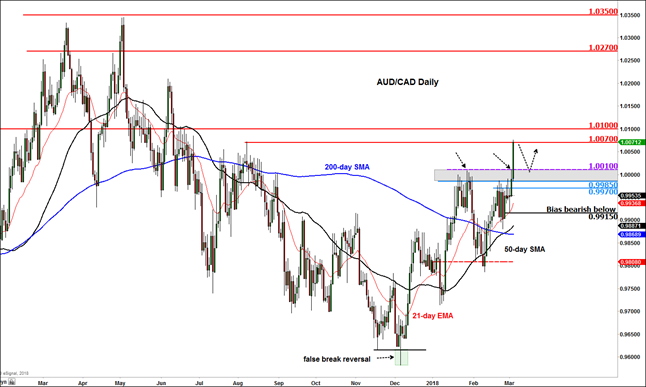