AUD/USD breaks down ahead of Aussie jobs data

When it comes to stubbornness nothing comes close to the AUD/USD. Up until the end of last week, it was neither the buyers nor the sellers who had been able to make a meaningful breakthrough in terms of pushing the unit in one or the other direction since the summer. But on Friday, the sellers finally won the battle. Like all the other major pairs and most buck-denominated commodities, the Aussie finally cracked under pressure from the US dollar. The latter has been surging higher ever since Donald Trump won the US elections. Many analysts believe that his ambitious spending plans and tax cuts will create jobs, boost growth and in turn create inflation. Wishful thinking in my view, although I hope I am wrong. But the dollar could remain supported nonetheless given that the Fed appears poised to hike interest rates in December before tightening its policy further in 2017. After all, no other major central bank is as hawkish as the Fed. But how much of the dollar strength will the Fed tolerate? Clearly, a strong currency is not good for US exports or tourism.

But the immediate focus for the AUD/USD pair is now on Australian jobs data due for release tonight or in the early hours of Thursday depending on your geographical location. Employment is expected to have bounced back by 20 thousand after dropping by nearly 10 thousand in September. However despite this expected bounce, the unemployment rate is still seen rising to 5.7% from 5.6%. Unless the employment figures come out significantly stronger, the AUD/USD may continue to push lower given the technical damage it has suffered in recent days.

After having successfully defending the 0.7720-7770 resistance range once again earlier last week, the sellers managed to push the pair through the 50-day moving average and the rising trend line on Friday. In the process, several short-term support levels were taken out, including the 0.7580 level. At the start of this week, the AUD/USD paused for breath, but today the selling pressure has resumed again. As can be seen on the chart, the 200-day moving average has also been taken out. So the trend appears to be firmly bearish now and it looks like price has also formed a double top reversal formation. If the break below the 200-day average is sustained now, we could see price dip test the prior swing low at 0.7445, which is also the neckline of the double top formation. In theory, if that level also breaks down then we could see an eventual drop to 0.7145, which was a major low in the summer and corresponds with the measured move objective of the double top pattern. That being said, a potential break back above short-term resistance at 0.7580 would invalidate this bearish outlook. In this scenario, a short-squeeze rally towards 0.7630 or even 0.7720 would then not come as a surprise. 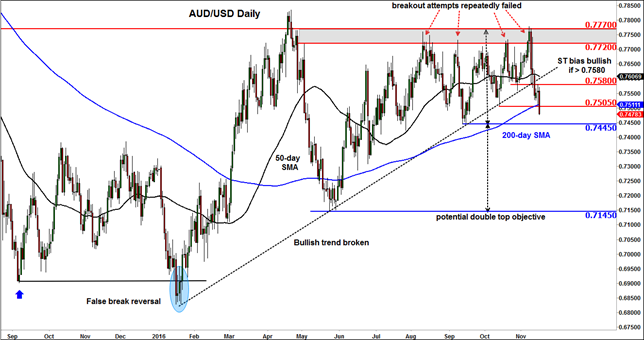