AUD/USD finally dips towards 0.75 ahead of RBA, NFP

The Australian dollar is going to be in focus next week. Retail sales will be released on Monday while the Reserve Bank of Australia will be making a decision on interest rates a day later on Tuesday.

The Australian dollar is going to be in focus next week. Retail sales will be released on Monday while the Reserve Bank of Australia will be making a decision on interest rates a day later on Tuesday. Sales are expected to have bounced back 0.4% in January after an unexpected 0.1% drop the month before. The RBA meanwhile is expected to remain on hold for the seventh consecutive time. The central bank has been cutting interest rates steadily since the fourth quarter of 2011 from a high of 4.75% to the current record low rate of 1.5%. At its most recent meeting on February 7, the RBA judged that holding interest rates unchanged would be “consistent with sustainable growth in the economy and achieving the inflation target over time.” There were no clear hints of further rate cuts or concerns about the appreciating exchange rate. And given that not a lot has happened since that meeting, there is a very low probability of a rate cut at this meeting. In fact, it is more likely that the rate statement will convey a more hawkish tone than dovish. So the Australian dollar may strengthen on the back of it.

However, if the AUD does strengthen it will likely do so against another commodity currency or a weaker rival like the Japanese yen. Against the US dollar, it may struggle to make a meaningful comeback because of the greenback’s renewed strength on the back of speculation over a sooner-than-expected rate increase in March. This also means that if the RBA were to deliver a more dovish statement then the AUD/USD could actually weaken significantly further next week. But perhaps the biggest risk for the AUD/USD forecast next week is the US jobs report on Friday. If the jobs data come out in line with or higher than expected then the probability of a March Fed rate increase will increase by a few more notches.

From a technical view point the AUD/USD looks anything but strong after this week’s technical damage. The unit finally moved away from that 0.76-0.77 range after failing to crack through the 0.7725-50 resistance area. It moved below short-term support levels at 0.7650 and 0.7610, levels which could turn into resistance upon re-test. At the time of this writing though, the AUD/USD was still above the key support range at 0.7500 to 0.7525. This is where several technical factors converge, including both the 50 and 200 day moving averages, previous support & resistance and the 38.2% Fibonacci level. We may see a bounce if price gets here later in the day on Friday or early next week. But if the 0.7500 handle also gives way then the AUD/USD could be in for a much deeper correction.

At this stage we need to see a distinct reversal price pattern in order for the short-term trend to turn bullish again. The long-term technical picture would only turn decisively bullish if we create a new high on the year. 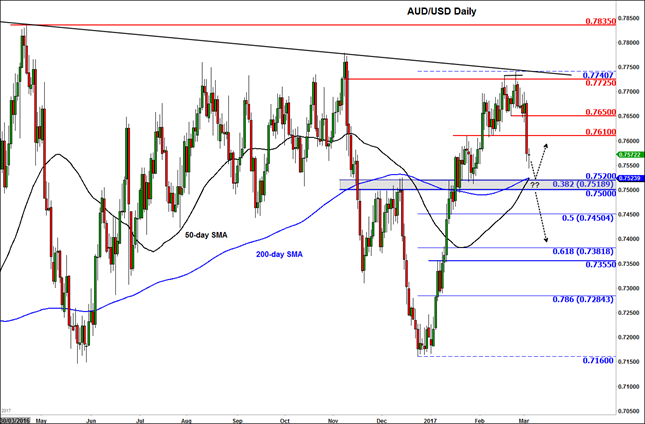