AUD/USD next domino to fall on rising Fed hike prospects?

The AUD/USD could be on the verge of a major move lower, mainly due to a potential appreciation in the US dollar. Economic data in the US is continuing to improve and some of the doves at the FOMC have correspondingly turned more hawkish, not least Charles Evans, the Federal Reserve Bank of Chicago’s President.

The AUD/USD could be on the verge of a major move lower, mainly due to a potential appreciation in the US dollar. Economic data in the US is continuing to improve and some of the doves at the FOMC have correspondingly turned more hawkish, not least Charles Evans, the Federal Reserve Bank of Chicago’s President. Mr Evans yesterday said: “I would not be surprised, and if data continue to roll in as they have, I would be fine with increasing the funds rate once by the end of this year.”

Since those comments were made, the ADP private sector employment report showed a solid, although below-forecast, gain of 154 thousand jobs for the month of September.  More importantly, the ISM services sector PMI rose to its highest level in almost a year and there was a noticeable jump in the employment component of the report. The leading indicators therefore point to another decent official jobs report on Friday. And provided the US presidential election does not trigger a shock in the markets, the Fed will feel almost obliged to raise rates again in December or risk damage what little credibility it has.

The rising expectations of a tighter policy in the US will likely cause US bond yields to rise and weigh further on noninterest-bearing assets like gold and silver. The rising yields in turn will likely cause the dollar to appreciate further and this may have negative implications on dollar-denominated base metals, too. This will probably not be good news for the Australian economy, a net exporter of base metals. Meanwhile the likely rise in US government bond yields will reduce the attractiveness of the Australian and New Zealand dollars, which had been supported, until now, by the relatively higher interest rates in those nations. While the Reserve Bank of Australia is effectively neutral at the moment as they have already cut rates to new record lows this year, they are not comfortable about the recent appreciation of their currency. The likely fall in metal prices as a result of a stronger US dollar means the Australian dollar will need to drop in order to keep the volume of metal exports elevated. So the RBA may have to loosen its policy, at the time when the Fed is starting to tighten its. Therefore the rate differential between the two nations should narrow further, causing a drop in the AUD/USD currency pair.

That’s all good, but what do the charts tell us? Well, the recent rally in the AUD/USD has lifted the pair to an important technical juncture around the 0.75-0.77 area. As the weekly chart shows, below, this is the top of the long-term bearish channel which is technically very important. Thus a potential move lower from here should not come as a surprise, not least as a result of position liquidation from those who bought the pair throughout this year. The sellers will like the fact that there is a Head and Shoulders pattern emerging on the lower time frame, as shown on the 4-hour chart in the inset. Some of the potential support levels that now need to break down include 0.7565, previously resistance; the Fibonacci levels at 0.7540 (61.8%) and 0.7495 (78.6%), and the prior low around the 0.7440 area. At this stage only a break outside of the bullish channel would invalidate our long-term bearish view, specifically a weekly closing break above the 0.7700/20 resistance area. 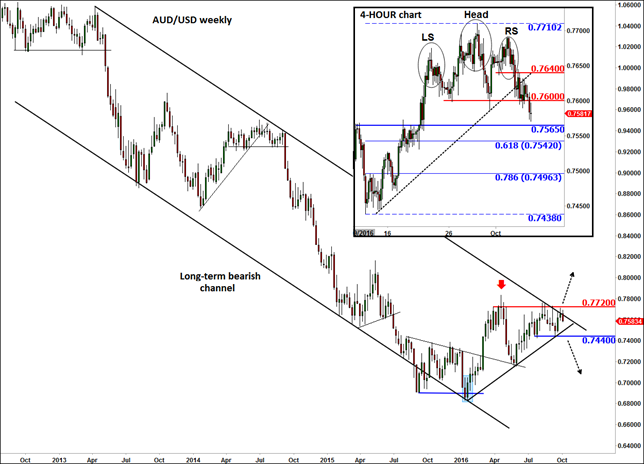