The Australian dollar took a tumble across the board after today’s GDP miss. Coming in a 2.3% YoY versus 2.5% expected, it takes the 2018 average down to 2.9% and below RBA’s estimate of 3%. AUD sold off mostly against JPY, USD and EUR to see AUD/JPY as today’s biggest mover with an intraday loss of -0.5%. Still, AUD/USD is currently testing key support around 0.7054 so it hasn’t completely rolled over just yet. 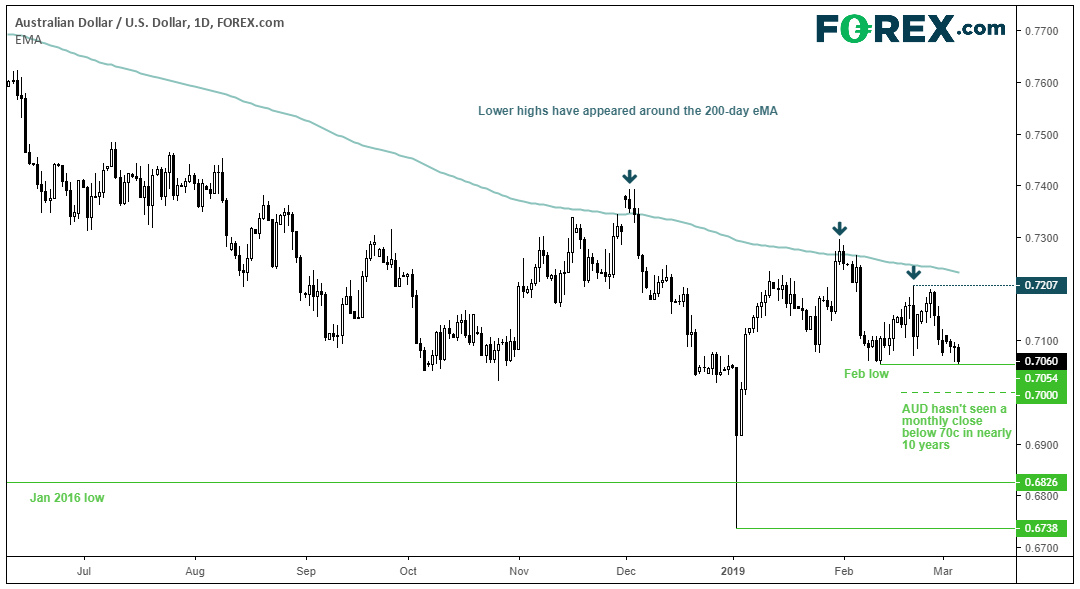 Standing back, the dominant force points lower. We can see on the daily chart that a series of lower highs has meandered its way around a declining 200-day eMA. Furthermore, the recent high of 0.7207 shows a pick-up of bearish momentum at the lows. If it can break the February low there’s around 50 pips of potential downside before it meets 70c, although with it being a psychologically round number, we’d expect a price reaction at such a key level. But, if bears manage to retain control beneath February’s low, they could be gunning for the January 2016 low around 0.6826.

However, before becoming outright bearish, it’s worth noting that AUD/USD hasn’t seen a monthly close beneath 70c in nearly 10 years. With 18 trading days left in March it leaves plenty of wriggle room for bears to try and push it lower.  Over the near-term however, sentiment this week could be dictated by today’s close, depending on which side of the February low it lands on.