Hopes that growth in Australia would rebound in Q1 were easily met, with GDP rising 3.4% q/q compared to 3.0% expected.

The Australian economy grew 3.4% q/q in seasonally adjusted terms in q4, according to the ABS (Australian Bureau of Statistics), beating expectations of 3%. The economy grew by 4.2% y/y to beat expectations of 3.7%. Ultimately it was its strongest quarter in five and matches the post=pandemic rebound in 2021. It also more than recoups the -1.9% contraction in Q3 which took a knock due to self-imposed lockdowns triggered from the rise of Delta. 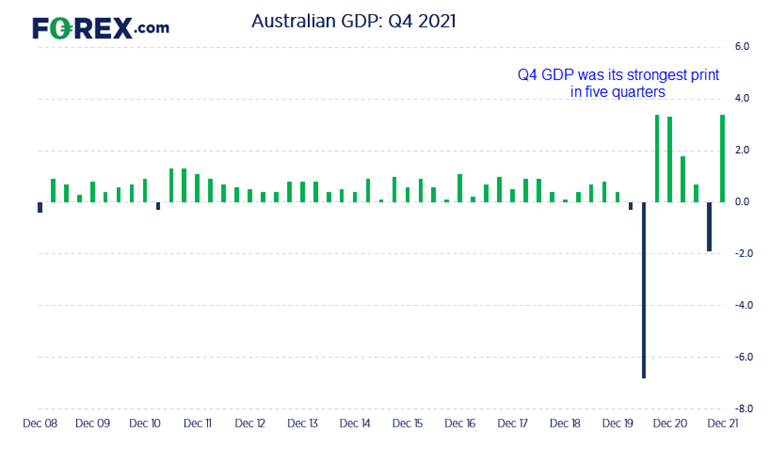 NSW and VIC drive the rebound

Household spending rose 6.3% in Q4 which is the first time it has exceeded pre-pandemic levels. Going out remained a key feature with spending on hotels and café’s rose 24.3% and recreation and culture spending up 17.1%. As expected, the laggards of Q3 (NSW and VIC) were the main drivers behind Q4 consumption as lockdowns are now a thing of the past for most.

How are things shaping up for Q1 GDP?

As decent as these developments are, growth data is extremely lagging and economists are pouring over leading indicators to get a grapple on Q1’s potential. So far this year we have seen retail sales rise 1.8% and AIG’ manufacturing PMI expand by 53.2, up from 48.4. Markit Economics PMI has also seen services and manufacturing PMI’s rise to 56.4 and 55.9 respectively and NAB’s business confidence post an optimistic 3 – up from -12 in December. Overall data for Q1 looks promising, although something to also factor in are extreme weather conditions which will almost certainly weaken data for QLD, with floods now cropping up across the key state of NSW.

AUD currently on track for a 5th consecutive bullish week 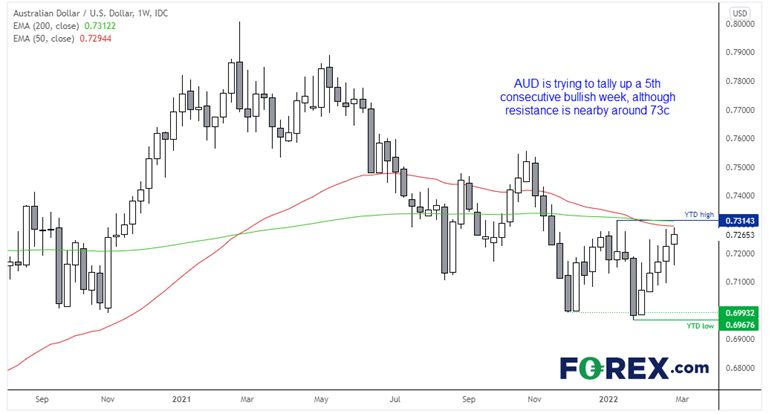 The Australian dollar is trying to tally up its fifth consecutive bullish week, which is quite impressive considering traders remains heavily net-short the futures markets. Rising commodity prices, such as key export markets including iron ore, coal, iron ore prices have certainly helped support the Aussie and effectively brush aside its status as a risk-asset despite war in Ukraine. Yet the potential for supply disruptions are also feeding back into established trends on said commodities, helping to place a floor of support for the Aussie. But it should be noted that the 200 and 50-week eMA’s reside around 0.7300 and the YTD high on AUD.USD - so we may find this level initially caps as resistance before any breakout occurs. 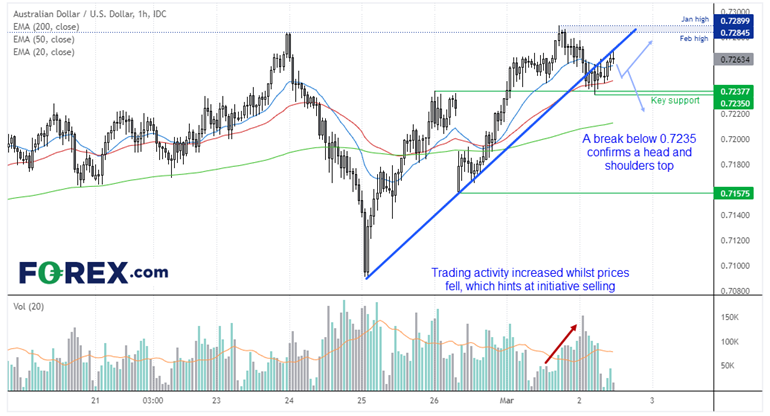 We can see on the hourly chart that the Aussie is testing the inside of a broken trendline, although the 50-bar eMA is currently supporting trend. But the Fed remains on track to raise rates this month despite the Ukraine crisis, which leaves the potential for the US dollar to recoup some losses and weigh on the Aussie over the near-term.

Should a higher low form above 0.7235 support then the reward to risk ratio becomes more appealing for longs towards the Jan and Feb highs. However, if we see a break below 0.7235 then it leaves the potential for another leg lower, as part of a head and shoulders top formation.