It is not a good day for the British pound or the Canadian dollar. The former is weighed down by a disappointing retail sales figure and on-going Brexit uncertainty, while the latter continues to get hammered after the Bank of Canada’s Stephen Poloz warned of a rate cut amid concerns about Donald Trump’s planned US protectionist policies, which may derail the Canadian economy. The Loonie may come under further pressure if Trump presses ahead with his ambitious and controversial plans. We will have a good idea about that at the inauguration speech later this afternoon.

Now with regards to the UK and the pound, the 1.9% drop in retail sales is a kick in the teeth for speculators who are turning bullish on the pound because the downbeat currency looked like it had turned the corner. With inflation rising in the UK and other economic pointers generally remaining strong, the Bank of England is no longer as dovish as it once was. Thus, today’s weakness in the sterling could be short-lived, especially against other weaker currencies – and the Canadian dollar is fast turning into one such currency.

Therefore, the GBP/CAD is where the pound’s potential strength may become more apparent, as opposed to, say, the GBP/USD. Interestingly, the GBP/CAD looks like it is also in the process of forming a major technical bottom pattern. As can be seen on the weekly chart, below, you will notice that:

So there are clear technical signs of a potential trend reversal for the GBP/CAD pair, though we will need to see more price action before turning decisively bullish. But the early signs are promising. 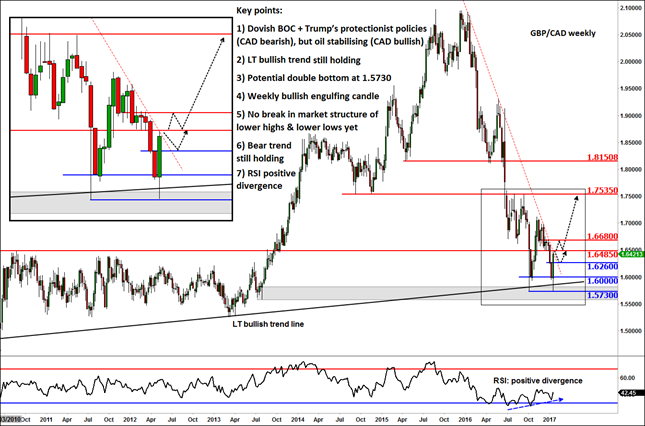