Bitcoin pierces 50000 for the first time

More and more investors are becoming attracted to the cryptocurrency

Bitcoin rose above the all-important psychological level of 50,000 for the first time today as more and more investors become attracted to the cryptocurrency.  The latest surge in Bitcoin comes after Tesla announced that it was investing $1.5 billion in it.  However, Tesla isn’t the only company to begin jumping into the cryptocurrency pool.  BNY Mellon is developing custody ability, as they are expecting Bitcoin to be used as payment in the future.  Mastercard said they are planning to accept transactions in Bitcoin.  Morgan Stanley is considering whether to set up a unit to delve into the space.  Even the city of Miami said they are willing to accept partial tax payments and other government payments in the form of Bitcoin.  With all this interest on the commercial size, many investors see opportunities to own Bitcoin at current levels.

On a daily timeframe, price has been moving higher since its breakout above 2018 highs of 19,666 on December 16th.  On January 8th, price reached 42,000 before a brief pullback to the 61.8% Fibonacci retracement level from the December lows to the January 8th highs.  Since then, BTC has been moving in an ascending wedge pattern towards the 50,000 mark.  50,602 is the ultimate high thus far, as it appears the cryptocurrency is respecting the confluence of resistance near 50,000:  the psychological round number level, the top trendline of the ascending wedge, and the 161.8% Fibonacci extension from the highs of January 8th to the lows of January 22nd.  In addition, the RSI has been diverging from price in overbought conditions for the past month, indicating that possibility of a pullback.  First support is nearly 10% lower at Monday’s lows of 45,914.75, ahead of the bottom, upward sloping trendline of the ascending wedge near 44,000, then the January 8th highs at 42,000.  If price does break below the bottom trendline of the ascending wedge, the target is a 100% retracement of the wedge, which is 28,612.  Long-term bulls will be salivating at the chance to add to long positions if it pulls back that far.  Bears will be looking to sell again between 50,000 and the day’s high of 50,602.53, though caution is  warranted given the velocity of the move over the last 2 months. 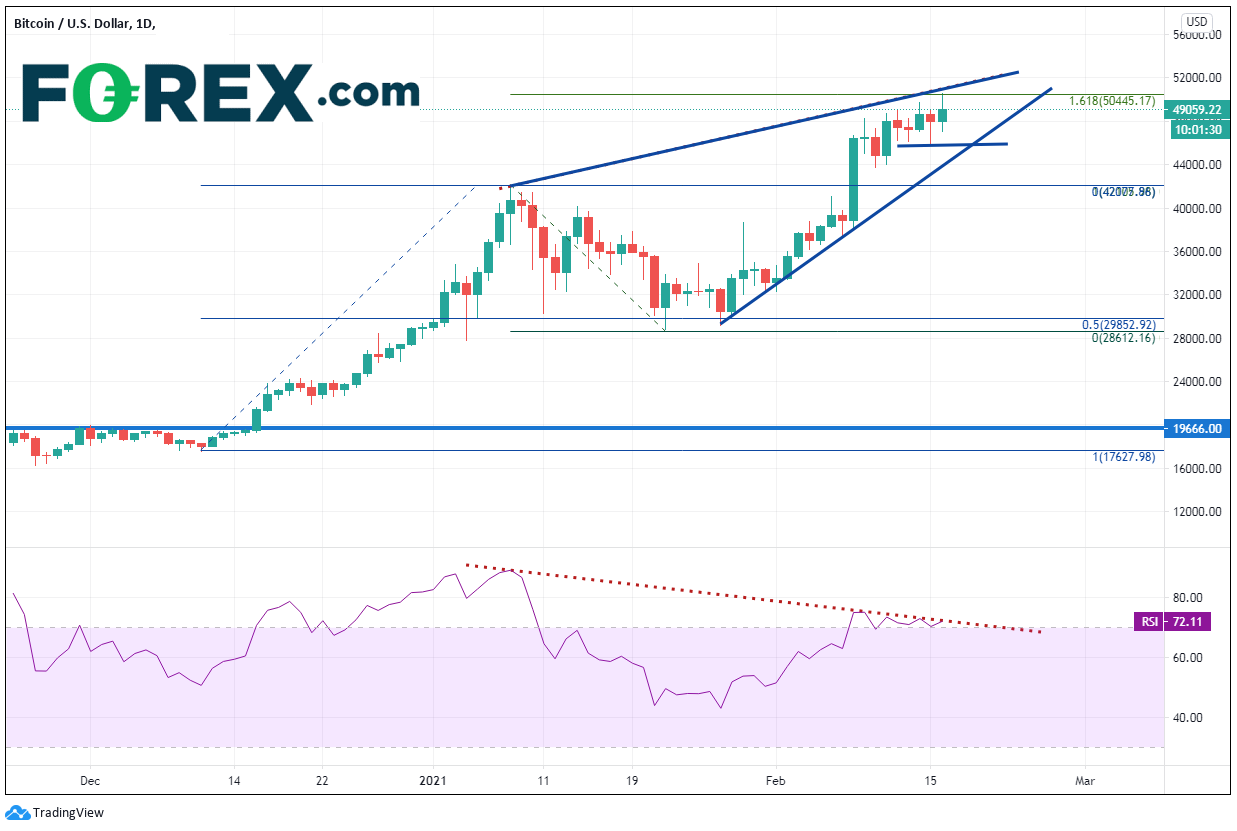 Can Bitcoin continue higher?  Anything is possible.  As more firms on the commercial side become interested in diversifying  into the cryptocurrency space, it will add to the excitement surrounding  Bitcoin.  However, traders may want to tread lightly in the space given the extremely volatility cryptocurrencies have seen over the last few months.