To the surprise of no informed market participant, the Bank of Canada left interest rates unchanged at 1.75% in today’s monetary policy meeting. A pre-meeting Bloomberg poll of 24 economists showed this result was unanimously expected, so the “decision” itself didn’t lead to any meaningful market moves...

To the surprise of no informed market participant, the Bank of Canada left interest rates unchanged at 1.75% in today’s monetary policy meeting. A pre-meeting Bloomberg poll of 24 economists showed this result was unanimously expected, so the “decision” itself didn’t lead to any meaningful market moves.

That said, traders were keeping a close eye on the central bank’s guidance for future interest rate changes, and that’s where we saw the big market-moving news. In its March meeting, the BOC downgraded, but ultimately retained, its hawkish bias, noting that there was “increased uncertainty about the timing of future rate increases.” Today’s statement went one step further, dropping the hawkish bias in favor of a neutral outlook: “We will continue to evaluate the appropriate degree of monetary policy accommodation as new data arrive.”

Traders have taken the hint, raising the market-implied odds of a rate cut by December from about 18% before the meeting to roughly 50% now. In addition to dropping its outlook toward raising rates, the Bank of Canada dramatically cut its 2019 GDP forecast from 1.7% to 1.2% on slower global growth and sluggish domestic housing data.

In today’s Asian session, my colleague Matt Simpson noted that we were “looking for USD/CAD to break above its March high,” given the general strength in the US dollar and the potential for a dovish surprise from the BOC. That’s exactly what we’ve seen so far, with the pair definitively breaking out of the topside of its “symmetrical triangle” pattern. The measured move target projection of this pattern comes in just below December’s nearly 2-year high: 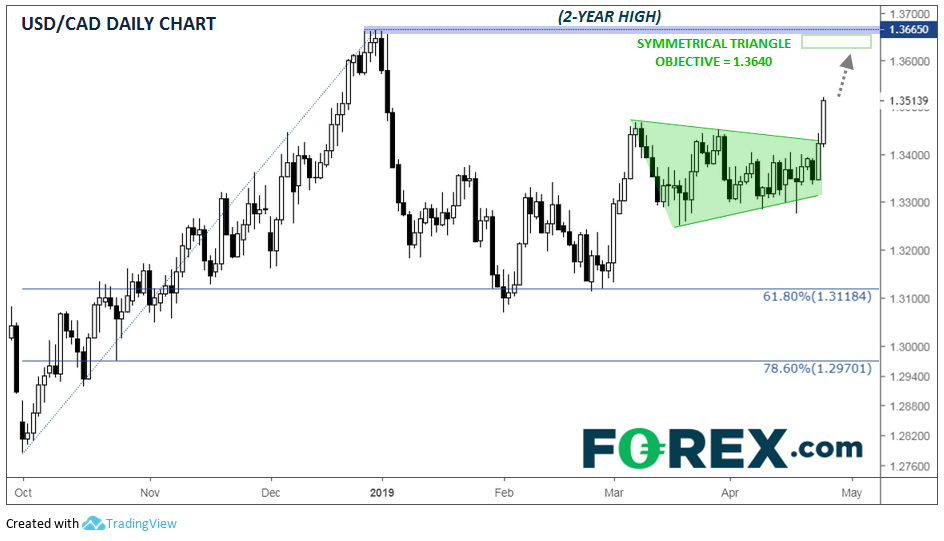