BoC may not be as Quiet as People Think

BOC may use some other sort of unconventional means to provide further stimulus.

Last week, after several inter-meeting interest rate cuts by the Reserve Bank of Australia, the RBA left rates unchanged at 0.25% at their regularly scheduled meeting and said they will do nothing until employment increases and until they are confident inflation will rise to 2-3%.   So basically, it’s in wait and see mode.  Tomorrow, the Bank of Canada has their regularly scheduled Interest Rate Decision and Monetary Policy Report.  After their last scheduled meeting on March 3rd, in which the Committee cut interest rates by 50 bps to 1.25%, the BoC proceeded to have inter-meeting rate cuts on March 13th and March 27th, slashing interest rates to 0.25% in order to stem the economic fallout from the coronavirus.   In addition, the Committee began their own version of Quantitative Easing and a Commercial Paper Program to help short-term funding.  They said they will take more action if needed.

Last week, Canada released its Employment Change for the month of March.  Given the extremely poor Initial Claims data in the US the 2 prior weeks before that (3.3 million and 6.6 million respectively), expectations were not high for Canada’s data.  Expectations were for -365,000. The actual number was -1,010,700 vs a February figure of +30,300!!  Is this worth “further action if needed”?  Could the BoC buy more bonds (more QE)?  If so, how much?  Although the BoC won’t budge on interest rates, they may use some other sort of unconventional means from their toolkit to provide further stimulus.

The decision will also be watched closely as the Monetary Policy Report is due out, which will provide outlooks and guidance for economic conditions.

Looking at a chart of USD/CAD, markets don’t seem to expect much out of the BoC tomorrow.  The pair traded up to 1.4667 on March 19th and have been trading lower since, yesterday  reached its lowest levels since March 16th.   If markets we expected something more from the BoC, the Canadian Dollar would have been weakening heading into tomorrows meeting.  Traders can’t argue that the reason USD/CAD is lower is because of Crude Oil.  Traditionally, the Canadian Dollar and Crude Oil move together (in other words, USD/CAD and WTI Crude Oil move in opposite directions.).  However , based on the correlation coefficient at the bottom or chart, since the beginning of April,  the Canadian Dollar and Crude have been moving in opposite directions, and there is barely any correlation between the 2 assets classes at the moment! (And crude was down over another 7% today!) 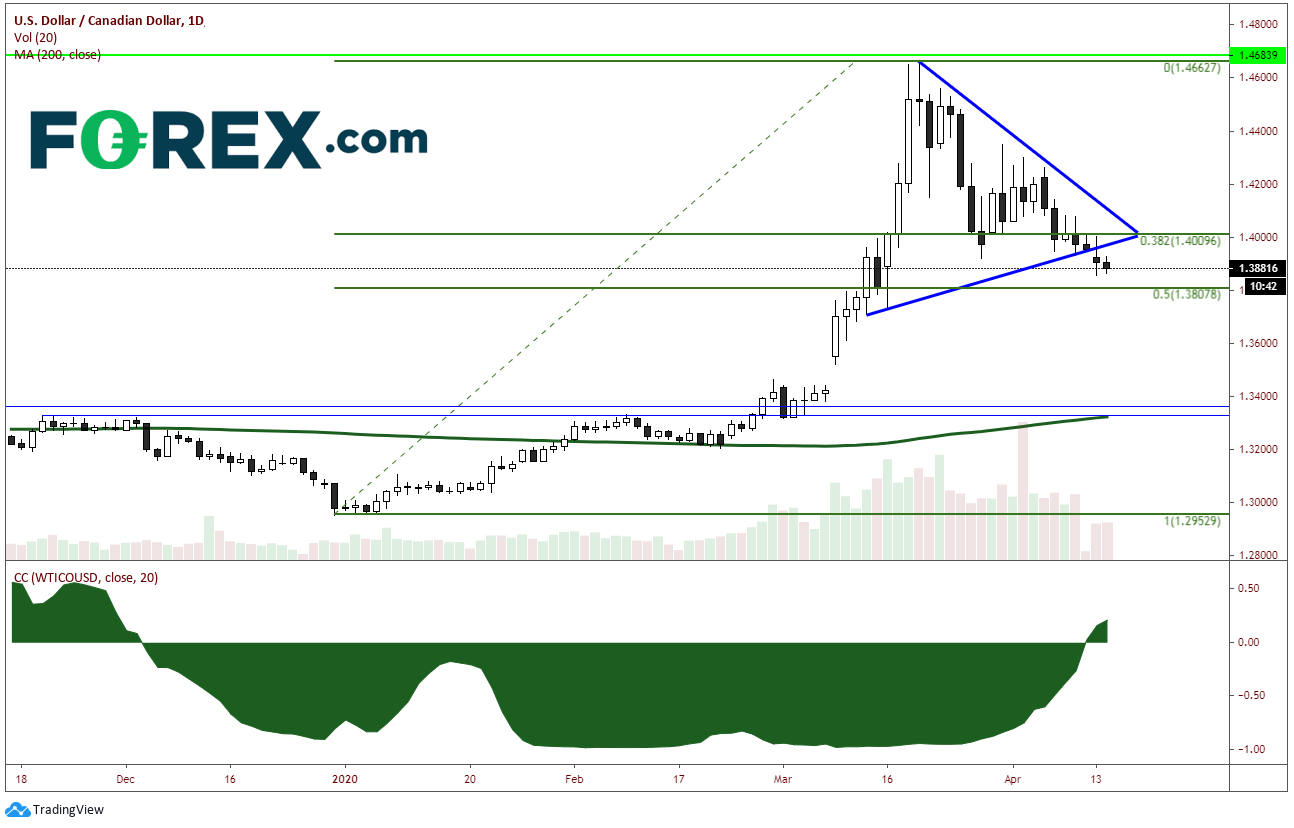 If the Bank of Canada does more QE tomorrow, USD/CAD may run higher through resistance at 1.3920 and 1.4000.  Next resistance is the downward sloping trendline and horizontal resistance near 1.4080.  In the event USD/CAD does continue lower, support is near 1.3800/1.3810,