The market seems to have taken the rate cut as “catching up” to other central banks.

Yet another Central Bank holds an emergency meeting and cuts interest rates.  It seems like it was only a matter of time before the Bank of Canada (BoC) made another inter-meeting move and cut rates by 50bps from 0.75% to 0.25%, falling in line with other major central banks around the globe.  This decision followed a similar emergency rate cut of 50bps on March 13th from 1.25% to  0.75%.  In addition,  the Bank announced a Quantitative Program of its own, as well as the Commercial Paper Purchase Program (CPPP) to make sure there is liquidity in the short-term funding markets for companies to operate on a day-to-day basis.  BoC Governor Stephen Poloz said that there is room to move lower if needed, while BoC’s Wilkins added that “there are still tools in the toolkit, including easing and funding for financial instructions to lend to businesses.”  This follows along the lines of many other central banks that it will do whatever is necessary. 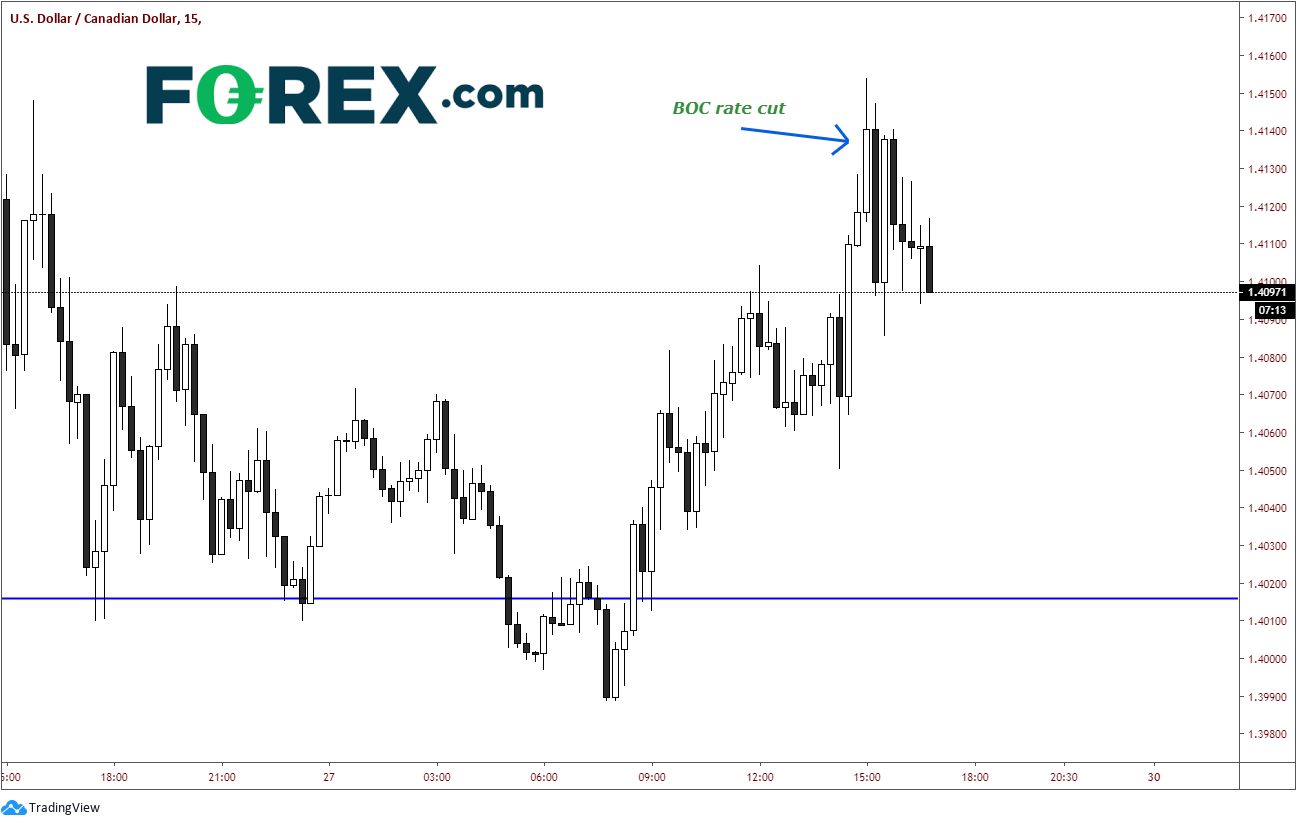 On a daily timeframe, price had gapped higher on March 9th from 1.3420 to 1.3550 when Saudi Arabia announced they would begin to pump as much oil as possible after Russia said they would not join with OPEC on cutting production.  The price of crude oil began to move lower and the USD/CAD began its move higher.   The Canadian economy relies a great deal on its crude exports, therefore, the price of crude affects the value of the USD/CAD.   The pair peaked on March 19th near 1.4675 before pulling back to yesterday’s close at 1.4010, which is the 38.2% retracement from the December 31st, 2019 lows to the March 19th highs.  There is also horizontal support and big psychological support level at 1.4000.  Today, USD/CAD traded briefly below this level to 1.3988 before bulls came in and brought the pair higher. 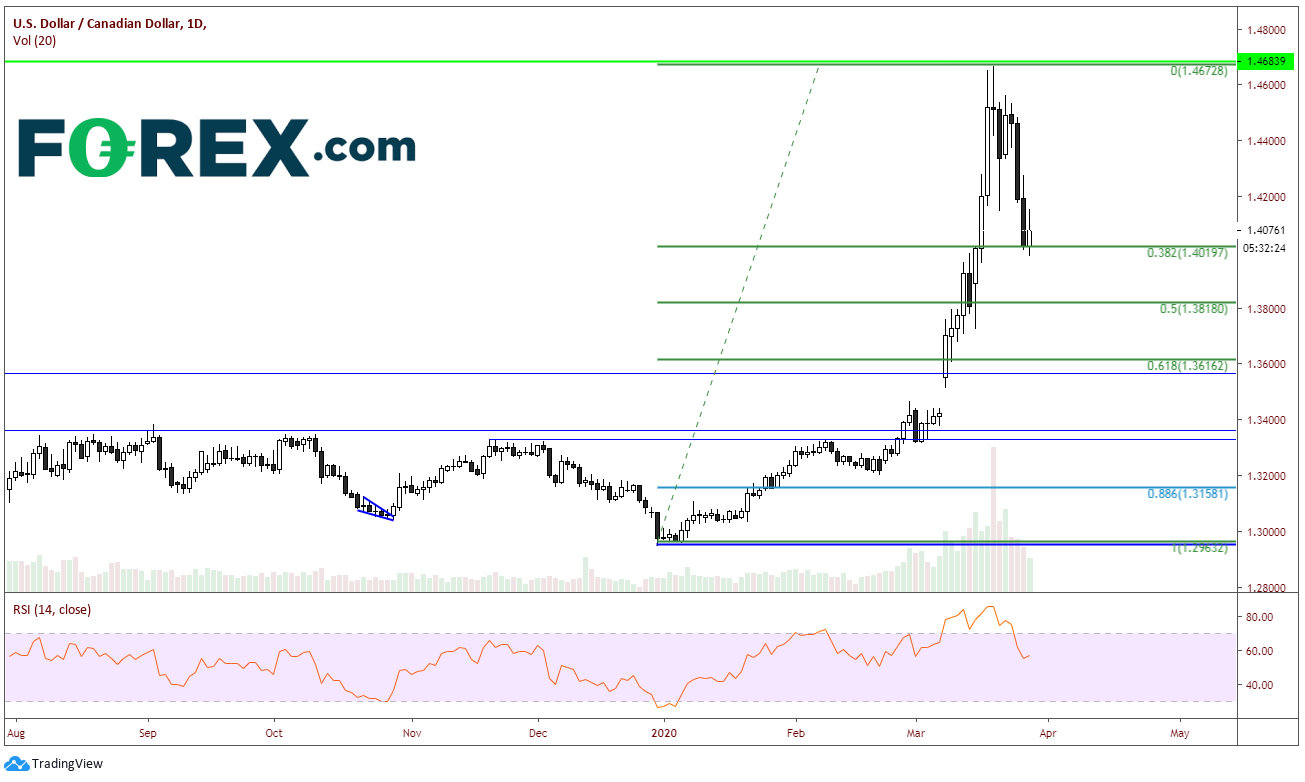 What’s different about today’s announcement compared to previous rate cut decisions?  Notice on a 240-minute timeframe that on the previous 2 dovish BoC announcements, price went higher on the announcement and continued higher.  Although there is time left in the current candle, it is currently putting in a bearish engulfing candlestick formation, indicating a continued move lower on a 240-minute timeframe.  This tells us that traders weren’t impressed with the rate cut and may have even been expecting it.  Immediate resistance comes in a today’s highs and a downward sloping trendline near 1.4150.  Above that is horizontal near 1.4180 and then horizontal resistance once again at 1.4300.  First support is the previous mentioned 1.3988/1.4000 (on the daily timeframe).  However, below that there isn’t much until the 50% retracement of the previous mentioned move near 1.3820 and then horizontal support near 1.3700. 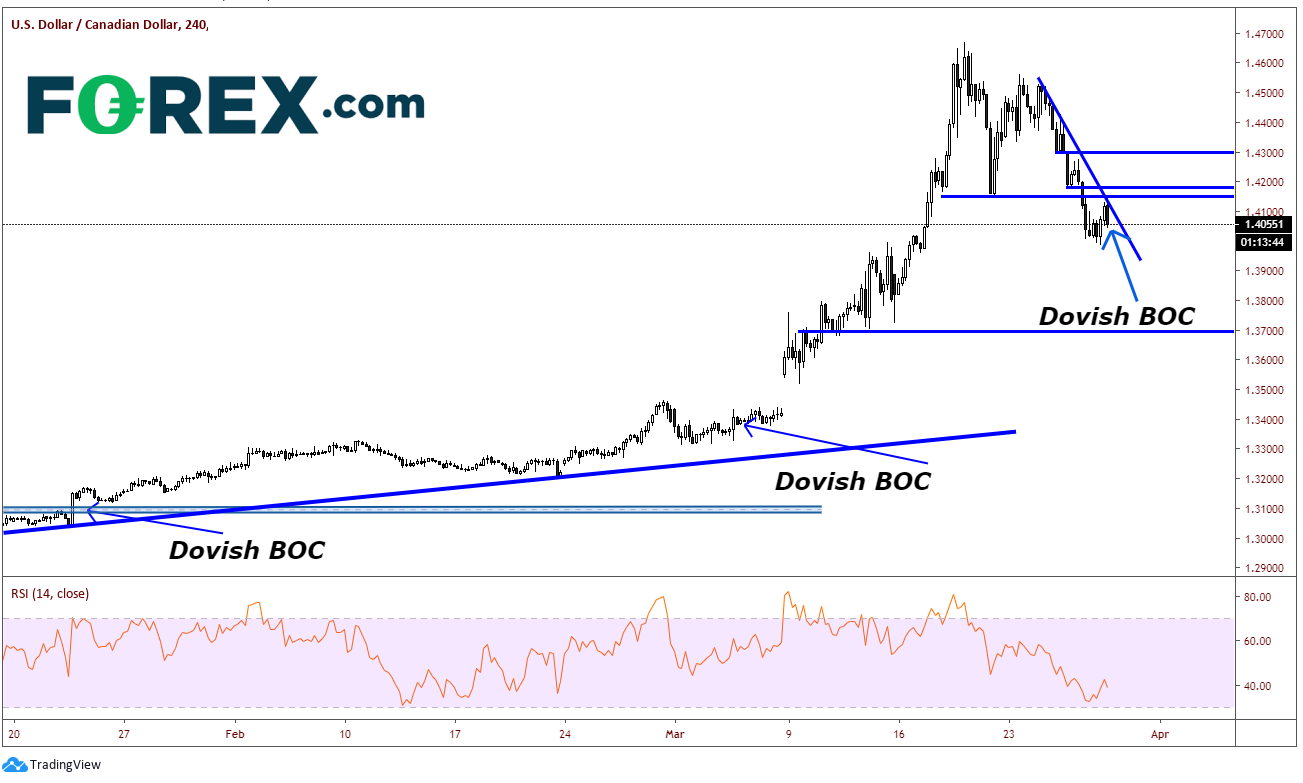 Although the BoC had an emergency meeting and cut rates again today, this didn’t seem to have much of effect on the market.  If anything,  the market seems to have taken it as “catching up” to other global central banks.