With the BOE and the BOJ intervening over the last week, GBP/JPY has been extremely volatile, trading in a range from 164.44 down to 148.79 over that same timeframe.

Earlier today, the BOE intervened in the bond market and said it will begin buying UK Gilts with maturities over 20 years. For now, the central bank says it will only last until October 14th. This comes less than a week after the Bank of England said it would begin selling its UK Gilt holdings at a pace of 80 billion Pounds over the next year, which now has been pushed back to begin on October 31st.  This is extremely worrisome and implies that the BOE is so concerned about the state of the economy that it felt the need to enter the market and buy bonds before the Gilt market collapsed. The BOE is basically re-starting its QE program.

Last week, the BOJ also intervened in its markets, specifically the FX markets.  The Bank of Japan bought between $21 billion and $25 billion of Yen, a record amount for Yen intervention.  As a result, USD/JPY fell from 145.90 down to 140.35, but has since rebounded to 144.80.  By the way, that same day, the BOJ also announced that it would continue with its Yield Curve Control program and said it would not be changing its forward guidance for the next 2-3 years.

Unlike that of USD/JPY, GBP/JPY has been unable to move higher above its June 9th highs at 168.73.  A major reason for the underperformance is due the market’s fear that the UK would fall into a recession while inflation was above 10% (because the BOE told us that!).  On September 13th, the pair reached a high of 168.02.  On Monday, during the GBP mini “flash crash” GBP/JPY reached as low as 148.79!  The pair has since bounced to resistance near 157.00, however has come off again to intra-day lows of 152.57.  Today, with the BOE intervention, the pair has traded in a 410-pip range. 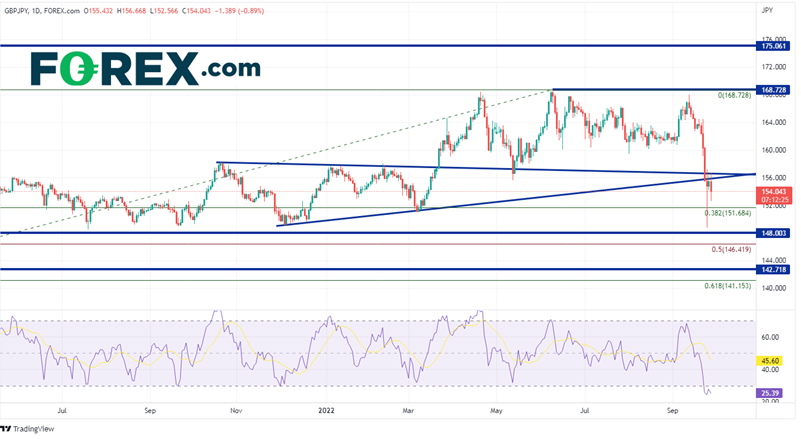 With the BOE and the BOJ intervening over the last week, GBP/JPY has been extremely volatile, trading in a range from 164.44 down to 148.79 over that same timeframe.  Use appropriate risk management when trading this pair.  GBP/JPY could move rapidly on the next headline!