“Super Thursday” is likely to be a damp squib for pound traders given the lack of progress in the Brexit process, with the exit date of March 29 fast approaching.

Today, the Bank of England will make a decision on interest rates, release the minutes of the meeting — which, among other things, will reveal the breakdown of the votes — and publish its latest Quarterly Inflation Report, all at 12:00 GMT. Half an hour later, Governor Mark Carney will be speaking at the BoE press conference. But this so-called “Super Thursday” is likely to be a damp squib for pound traders given the lack of progress in the Brexit process, with the exit date of March 29 fast approaching. Policy makers at the central bank, like many individuals and businesses, are almost guaranteed to once again be in the “wait and see” mode. So, no one is expecting any changes in interest rates or QE — and it should be a unanimous decision from the Monetary Policy Committee. Nonetheless, it will be interesting to hear what the BoE’s assessment of the economy and inflation will be in the quarterly Inflation Report and Governor Mark Carney’s press conference. However, we don’t think that it will trigger a massive move in the pound or FTSE, as the chances for surprises are low.

Domestically, Brexit is obviously the biggest risk facing the economy right now and we have seen the latest business surveys pointing to a slowdown in economic activity. Purchasing managers have reported falling activity in all three sectors of the economy — manufacturing, construction and services — in January. What’s more inflation has started to ease back over the past few months and the headline consumer price index has fallen near the Bank’s 2% target, at 2.1%, while core CPI has remained somewhat more stable around 1.9%. Crucially, though, with inflation easing a little and nominal wages including bonuses rising at a faster clip of 3.4% in the three months to November compared to a year earlier — the biggest increase since July 2008 — real wages have increased by a good 1.1%. On top of this, employment has remained robust and the unemployment rate has remained near historic lows around 4.0%.

Below is the summary of the latest UK economic data that the BoE’ Monetary Policy Committee might take into account when making a judgement on interest rates and economic outlook:

In normal circumstances, you would have thought that a rate hike would have been warranted given the rise in real wages and inflation remaining above the Bank’s 2% target. However, these are not normal times with Brexit uncertainty hanging over the economy. On top of Brexit, we have seen a slowdown in economic activity in places such as China and Germany. Indeed, a couple of other major central banks — including the Fed and ECB — have recently turned dovish again over the prospects of a slowdown in global GDP. The BoE will also have to consider this as a potential risk when deciding on monetary policy.

With regards to Brexit, UK Prime Minister Theresa May is returning to Brussels later to ask EU leaders for legally binding changes to the Brexit deal. She is due to meet, among others, European Commission president Jean-Claude Juncker and European Council president Donald Tusk, who on Wednesday caused a stir by saying there was a "special place in hell" for those who campaigned for Brexit without a plan to deliver it. We are not sure comments like that will help speed up the process, but what it does show is that the EU is understandably growing frustrated with the UK’s handling of Brexit, which has been disastrous. Last month, the UK parliament overwhelmingly rejected the withdrawal deal that the government had spend a good part of two years negotiating with the EU, and later backed an amendment for the government to seek "alternative arrangements" to the controversial backstop, which is an "insurance policy" designed to avoid the return of customs checkpoints between Northern Ireland and the Irish Republic after Brexit, under all circumstances. Not many people are hopeful that there will be any real progress on the situation as Mrs May seeks changes to the backstop, with the EU repeatedly ruling out changing the withdrawal agreement. If unsuccessful, the government has said it will table a statement to the House of Commons on 13 February, which MPs will be able to amend and vote on, paving the way for the second “meaningful vote” either next week or perhaps towards the end of the month.

From a technical point of view, the GBP/USD is bang in the middle of its recent range, with price testing a potential support level around the 1.29 handle at the time of writing. It remains to be seen whether it could bounce from here, though. With the bullish trend broken, the bears appear to have the control for now. But there is a good possibility that the Cable may have already bottomed out when it formed a false break reversal pattern against last year’s low in early January, around the 1.2480 level. So, we would prefer to look for bullish patterns to emerge going forward than bearish. Short-term resistance meanwhile comes in around 1.2930, followed by the psychological level of 1.3000 and then 1.3050. Overall, though, the technical bias remains neutral, and understandably so given the above fundamental considerations. 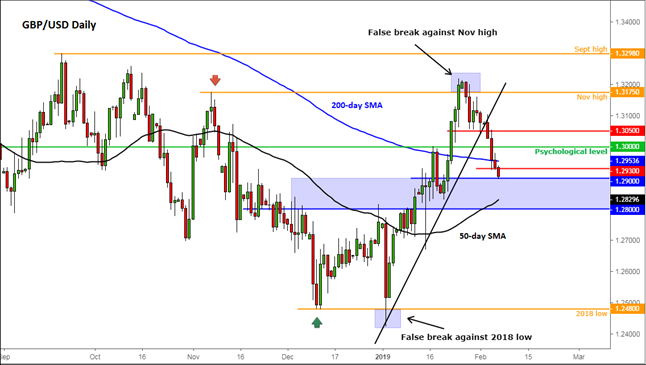