Governor Lowe has long maintained that the next change to interest rates would be an increase, but he changed his tune in a speech during today’s Asian session, just a day after the RBA released its full monetary policy statement. In an unusually straightforward comment (for a central banker at least!), Dr. Lowe stated, “Over the past year, the next-move-is-up scenarios were more likely than the next-move-is-down scenarios. Today, the probabilities appear to be more evenly balanced.” Later, he noted that lower interest rates would lead to a decline in the Aussie in a transparent attempt to jawbone the currency lower.

In other words, the central bank has finally acknowledged the numerous signs of slowing growth in the region, and traders have certainly taken notice. AUD/USD collapsed over 100 pips in the immediate aftermath of the speech, with the selling pressure taking the pair to a nearly 2-week low by the European open. More to the point, futures traders are now pricing in a 50% chance of an interest rate cut this year; in any event, the prospect of an RBA rate hike at any point before Q4 is now vanishingly small, and even the most optimistic of analysts are pushing back their rate increase calls into 2020.

Despite the sharp drop following Governor Lowe’s about-face, the Aussie hasn’t yet made a “lower low” on the daily chart. Make no mistake: This represents a dramatic (if overdue) shift from the RBA, and we wouldn’t be surprised to see the Aussie’s weakness continue from here.

Looking at the secondary indicators, AUD/USD’s RSI has broken its previous trend line and remains in bearish territory after failing to reach the “70” level at any point in the last year. Meanwhile, the MACD is rolling over to cross back below its signal line and may soon cross below the “0” level, showing a shift back to bearish momentum in the pair.

If these bearish inclinations are correct, sellers may look to drive the pair down toward the late January low at 0.7175 next, with potential for a move down toward the psychologically-significant 0.7000 level next. Near-term bulls would have to see the pair break back above last week’s high near 0.7300 before growing more optimistic on the pair’s prospects moving forward. 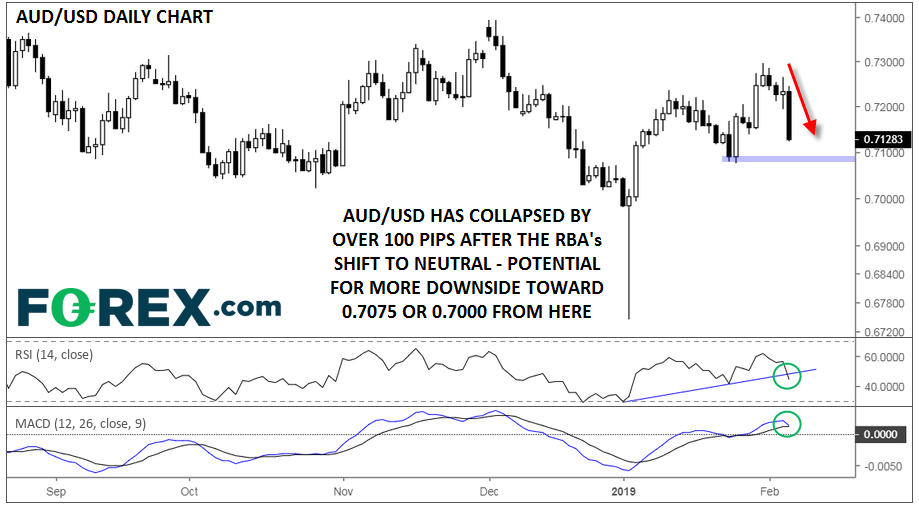