News that the UK manufacturing activity in September hit its highest level since June 2014 has provided a welcome relief for sterling. The pound had tumbled to a new post-Brexit low against the euro earlier this morning after UK Prime Minister Theresa May said that Article 50 will be triggered no later than March 2017, which would see the UK leave the EU in 2019.

News that the UK manufacturing activity in September hit its highest level since June 2014 has provided a welcome relief for sterling. The pound had tumbled to a new post-Brexit low against the euro earlier this morning after UK Prime Minister Theresa May said that Article 50 will be triggered no later than March 2017, which would see the UK leave the EU in 2019. Unlike the pound, the FTSE 100 has rallied 1% to climb to its highest level since June 2015. The UK stock market has been supported by a weaker pound, which benefits exports, and rallying oil prices with Brent moving north of $50 a barrel again.

According to Markit’s purchasing managers’ index (PMI), Britain’s manufacturing sector defied expectations again in September. The PMI expanded at a solid pace of 55.4, up from 53.4 record in August and easily beating expectations for a reading of 52.1. Britain’s other important PMIs will be released later this week, with the construction sector PMI due for release on Tuesday, followed by the most important services sector PMI on Wednesday. The downbeat sterling will need these PMIs to also post strong readings for September if it has any chance of making a quick comeback.

Most of pound-negative news is now out of the way

While one could argue that it may be a bit premature to start feeling bullish on the pound again, most of the negative news is out of the way now. We had the initial Brexit vote shock, then the Bank of England’s response in the form of a rate cut and re-introduction of QE, and now we know that the Article 50 will be triggered before April next year. The markets are forward-looking and for sterling to weaken significantly further investors will be keen to find out what the next trigger might be. Specifically, they will be wondering if there will be any further Bank of England interest rate cuts to look forward to. On that front, the BoE’s outgoing deputy, Minouche Shafik, has recently said that it may be necessary to loosen policy further. But she’s a known dove and is leaving in February anyway. Also, if UK data continues to improve like it has over the past several months then there is no need to do that anyway.

Sterling could be close to hitting a bottom

So, the pound may well be very close to finding a base, though at this stage I wouldn’t rule out the possibility for it to weaken a little bit further in the short-term. What this means from a trading point of view is that we could start seeing the dips being bought and rallies sold into, leading to more range-bound activity until probably the buyers come out on top at some point in the near future. The pound’s potential strength could become visible more against currencies where the central bank is even more dovish than the BoE. Against the dollar however it may struggle, especially if this week’s US economic numbers, including the jobs data on Friday, come out ahead of expectations.

Thus, if we see further improvement in UK data the GBP/JPY or EUR/GBP could be a more interesting FX pairs to watch rather than the GBP/USD. The EUR/GBP hit a new post Brexit high of nearly 0.8750 this morning before pulling back a little in response to the positive manufacturing PMI. The key level to watch now is around 0.8725, which was the previous high hit after the Brexit vote. If the EUR/GBP fails to hold its own above this level then we could see the unwinding of bullish positions, leading to a potential sell-off as more and more supports probably break down. However the short-term bias would remain bullish while this level holds as support.

So while the EUR/GBP remains above 0.8725, there is a possibility that the bulls will try to lift the unit towards the Fibonacci extension levels shown on the chart. However if price moves below this level and holds below it then today’s breakout could be considered a false move. In this case, the first bearish objective may be to ‘fill’ the weekend gap above 0.8660. Thereafter, the key support and prior low sits at around 0.8590. If this level breaks too, then we will have our first lower high. If seen, this would be a bearish outcome. 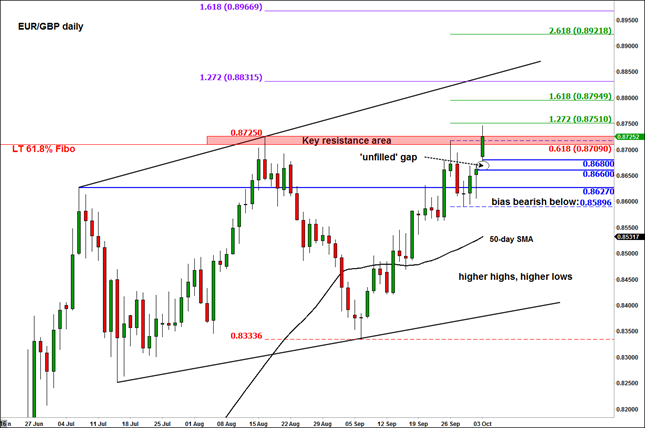